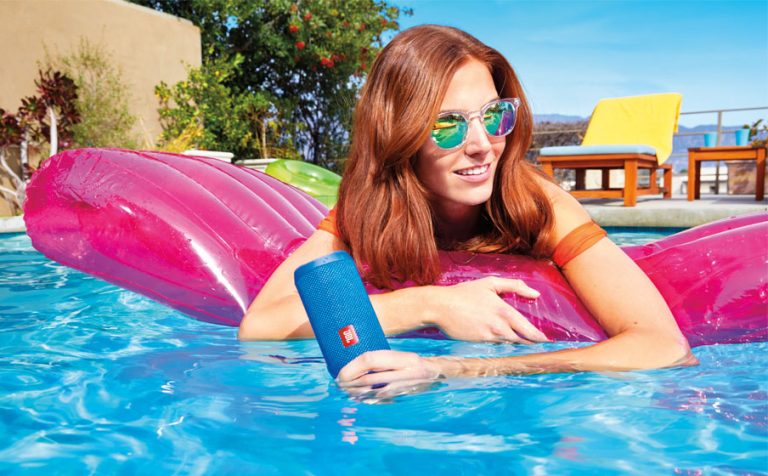 At first glance, the JBL Flip 4 speaker is just another a waterproof-ish portable Bluetooth speaker. But with the prestige of the JBL brand behind it, I was hopeful that it might stand out as being better than most. I wasn’t disappointed.

The JBL Flip 4 is essentially a cylinder in shape, 175mm long and around 70mm in diameter (one side, which bears the controls, is a little flatter and wider). It comes with a kind of rubberised fabric finish, available in six colours. The review one was red.

The speaker is rated at IPX7 waterproofing, which means it can survive up to half an hour in less than a metre of water. It’s not for swimming, but a whoopsie ought not destroy it.

Inside are two 40mm “Transducers” as JBL calls them. Which means little speaker drivers. Each has eight watts of power available. It’s portable, which means a built in battery. In this case it’s a Lithium-ion battery rated at 3000mAh and 3.7 volts. JBL says that the unit takes three and a half hours to charge, and is good for “up to 12 hours (varies by volume level and audio content)” playing time.

While it’s essentially a Bluetooth speaker, it has the nice touch of having a regular analogue audio input. Got an old iPod Classic? Yes, you can use this speaker.

Power is via a Micro-B USB socket which, like the analogue input, is hidden under a rubber cover for water proofing. If the proximity of water isn’t an issue, you can leave the speaker plugged into a power source all the time and it will work fine.

On the back are buttons for power, Bluetooth pairing, play/pause and volume up and down. The speaker has a microphone so that you can use it as a hands-free device with smart phones.

JBL doesn’t specify the codecs implemented, so we can safely assume that neither of the higher quality – AAC and aptX – codecs are available. Instead the standard SBC codec will be used. (Codec stands for compression/decompression – the scheme that squeezes the music down tightly enough so it will flow across the modest bandwidth available to Bluetooth.)

JBL specifies the frequency response of the unit as 70 to 20,000 hertz. That bottom end is a bold claim for such a small device. What makes it possible is the use of two passive radiators. Each end of the cylinder that constitutes the speaker has a 40mm radiator in it. These pump fairly furiously whenever music is playing.

A passive radiator is a device that tunes the speaker to makes sure bass energy is not wasted.

You can pair two source devices to the speaker at once. You can also meld lots of the JBL Flip 4 speakers into an array. Up to a hundred can be joined for what ought to be fairly thunderous sound.

The JBL Flip 4 weighs just a touch over 500 grams. It comes with a short colour-matched cord attached. This can be used as a wrist strap. It also comes with a bright orange USB charge cable.

I continue to be amazed by the bass that consumer electronics companies are now capable of making tiny loudspeakers produce. It may not be the highest of fidelity, the lowest in distortion, but a respectable bass fill simply makes every thing seem more real.

Yet until recent times any speaker like this would have to be called “tinny”, because upper midrange and treble was all they could produce.

This one? As I’m typing away right now, “Sunshine of My Love” by Cream is playing. The Flip 4 is four metres away from where I’m sitting, yet it’s producing good, clean music at a moderate volume. Not quite room filling, but probably loud enough to have any co-workers, were there any in this office, protesting for it to be turned down.

There is no kick drum. Not the slightest hint of one. But the bass guitar is full and almost completely reproduced, and in balance with the rest of the music. The rest of the drum kit is equally full, and suffering little compression.

The overall tone is a touch bright, but not excessively so. Vocals are clean and sibilance free. Cymbals are in balance.

Brought up closer, the speaker is accordingly louder but the character remains the same.

That contrast between the bass guitar being present and full and the kick drum being completely absent prompted me to conduct a more formal check to see precisely what was going on. Measuring the full frequency response of the system from about half a metre away showed that the JBL Flip 4 was perfectly happy producing usable output all the way from 60 hertz up to 20,000 hertz. That range was once the preserve of high quality bookshelf loudspeakers.

That said, not all was perfect. The lower midrange was somewhat recessed, while the mid and upper treble – 4000 hertz and up – was somewhat higher in level than the lower frequencies. So, by high quality bookshelf speakers, only so so.

Let’s zoom in a little on that bass end. I remeasured, but this time with the microphone up close to one of the passive radiators to make sure things weren’t being unduly influenced by room effects. The bass had a clear “shoulder” at 62.5 hertz, below which it fell away rapidly. It was down by twelve decibels at 55 hertz, and 24dB by 50 hertz. Those figures just mean that anything at 55 hertz is basically inaudible, unless there’s nothing else playing.

Kick drums have most of their energy at around 40 hertz, which is why they aren’t being reproduced.

This does raise a question I find interesting. Why does JBL say that their frequency response is 70 to 20,000 hertz? It could legitimately say 60 to 20,000. And it has far better measurement facilities than I do.

Perhaps it figured that no one would believe it if that was its claim, whereas 70 hertz, while still impressive, would be more plausible.

You’re very unlikely to do better for the price for a compact, portable Bluetooth speaker than the JBL Flip 4.