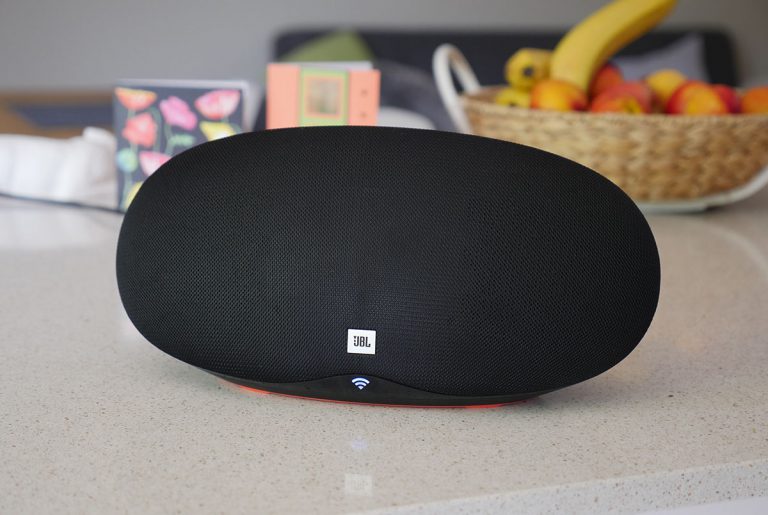 Ubiquity, thy name is Bluetooth. But Bluetooth isn’t the only wireless technology for delivering music to speakers. There’s also WiFi. JBL’s Playlist wireless speaker of course supports Bluetooth – what company would dare not these days – but it stands out from its would-be peers by virtue of WiFi.

I shall return to the issue of WiFi vs Bluetooth, but first let’s look into the JBL Playlist. This is a smallish speaker, available in black or blue in Australia, although a white model is pictured on the website as well. In addition to WiFi and Bluetooth, it has a 3.5mm stereo socket so you can feed in analogue audio from, say, an old iPod or a phone you don’t want to connect using Bluetooth. Or even a TV.

By “smallish”, I mean 316mm wide, 131mm tall and 147mm deep. It weighs just a little over a kilogram. It is curvy and, sitting normally, the speakers are aimed slightly upwards from the horizontal. It’s finished in a quality plastic. The grille looks somewhat cloth-like but it actually a firm, perforated plastic.

The review model was finished in black, and around the base it had a red ring, making it stand out just that little bit. On the front is a WiFi light indicating connection status (including signal strength). An indent at the bottom rear has the 3.5mm audio socket and the two-prong socket for the power lead. Unlike a lot of other compact speakers, the 240 volt power supply is built in, rather than being a wall wart. That makes for a neater unit in my view.

Under the grille are two 57mm speaker drivers, which JBL for some reason calls “woofers”. Since they function as full range drivers – JBL specifies the frequency response as 60 to 20,000 hertz, -6dB – calling them “woofers” makes as much sense as calling them “tweeters”. At the back is a large passive radiator. That’s a kind of sprung panel (in some hifi speakers, the passive radiator is a regular speaker minus the electrical bits) which is tuned to employ some of the energy which would otherwise be wasted inside the enclosure to enhance the deeper bass. If it does indeed deliver down to 60 hertz, that would be an impressive performance from such a small speaker.

Each of the two speakers has fifteen watts of power available to it.

Across the top is a set of five buttons for controlling the unit: power, volume up and down, play/pause and Bluetooth. Pressing the two volume buttons mutes the sound.

The unit supports dual band – 2.4Ghz, and 5GHz – WiFi, and the 802.11b/g/n/ac standards, so dropouts and problems with crowded WiFi spectrum should not arise.

So what does WiFi offer over Bluetooth? One reason might be quality. Bluetooth uses compression systems that can detract from audio quality. JBL doesn’t specify the Playlist as using the higher quality aptX or AAC codecs, so I’ll assume it relies on the standard lower quality SBC. Via WiFi the speaker can support streaming music of full CD quality – 16 bits, 44.1kHz sampling, uncompressed – or even better. It’s rated at 24 bits and 96kHz for high resolution music.

(Does that make a difference in ultimate audio quality in a relatively compact speaker of this kind? Probably not. But why add unnecessary hurdles.)

Another reason is versatility. The two main WiFi functions supported by this speaker are Chromecast and Spotify Connect. Chromecast is Google’s wireless media standard. The Google Home app can send all audio from an Android device to a Chromecast-compatible speaker, as can many apps running on both Android and iOS, and indeed the Chrome web browser on any Windows or Mac computer on the same network.

Furthermore, thanks the ability to “group” Chromecast speakers, you can use a whole bunch of JBL Playlist speakers, or one or more of them with other Chromecast-compatible speakers, for a multi-room system. That’s something you can’t do with Bluetooth.

Missing is support for Apple AirPlay, so full-on Apple households may want to look elsewhere. Intriguingly, the speaker does have a little something about AirPlay internally. As is my practice, once I’ve discovered the IP address of some device I’ve plugged into my home network, I type it into a web browser to see if there’s some kind of control page. With this speaker there was. It was headed “Frontier Silicon”, which is the UK firm which supplies the networking smarts for JBL speakers. It had tabs for network and system information and firmware updates, while the front “Status” page summarised some of that, and had a section in which one could “Set/Change AirPlay Product PIN”. Perhaps had JBL purchased an AirPlay licence for this device, it could have supported AirPlay as well (or perhaps this is just a generic Frontier Silicon interface, and the necessary hardware isn’t in place).

I checked the Bluetooth functionality of course, and it worked about as well as Bluetooth normally does. I spent most of my time using the WiFi connectivity, though. Spotify Connect, of course, and also a couple of apps for casting music to the speaker. I also checked out connecting with the Chrome browser. Audio from YouTube played through the speaker with reasonable sync with the video on the computer screen.

But first to do that you have to connect the speaker to your WiFi. That’s done through the Google Home app, and it worked as smoothly as always. Less than five minute after plugging in it was up and running, and the speaker appeared on the various lists of available speakers in Spotify, Chromecast-compatible apps, and the casting option on Chrome tabs.

The JBL Playlist provided lots of fun music. Super high fidelity … well, no, of course not. But fun, respectable, tonally balanced sound is what it did deliver. I spent some time revisiting The Monkees. As I write this paragraph the 1967 single “Goin’ Down” is playing, cleanly and musically, and with an excellent rendition of the remarkably lively bass line.

I mentioned The Monkees specifically, because this is a group in which the recordings – particularly the earlier ones – tend to be a bit thin in sound, and can easily sound rather tinny. The JBL Playlist tendered them with a full, fairly modern sound which avoided all that.

The speaker went reasonably loud without becoming unduly stressed. Playing tracks from Tame Impala’s Innerspace, my SPL meter indicated a maximum of 92dB (SPL at one metre) with moderate levels of distortion. Not quite headbanging levels, but impressive nonetheless. Backing it off a couple of notches made for that clean, balanced sound.

The sound is delivered as stereo, but the speakers are close enough together to effectively make it seem mono. No special DSP techniques have been employed to “spread” the left and right channels.

So, what about that claimed 60 to 20,000 hertz frequency response? I measured the output – with the microphone up close to the speaker to reduce room effects – and found a response so smooth it would put many hifi speaker to shame. A realistic accounting has it from 61 hertz to 12,000 hertz ±4.5dB. Then there’s a +6dB peak above that, before the output drops to -6dB at 17,000 hertz. At the bass end, I measured -6dB at around 60.5 hertz.

Incidentally, the unit goes to sleep after ten minutes of no signal, and consumes only two watts in that state. In use it’s rated at up to thirty watts consumption. It switches on again pretty much instantly on receiving either a Bluetooth or WiFi signal.

One last thing. The passive radiator on the back is not hidden away, and I found it very susceptible to being right under my fingers whenever I picked up the speaker. It seemed fairly robust, but you do want to be careful not to apply too much pressure to it, lest it be damaged.

The JBL Playlist is a decent sounding, compact and versatile speaker. Unless you need the portability afforded by a built in battery, it’s difficult to see why you would choose a Bluetooth-only speaker when you can have this speaker’s WiFi.