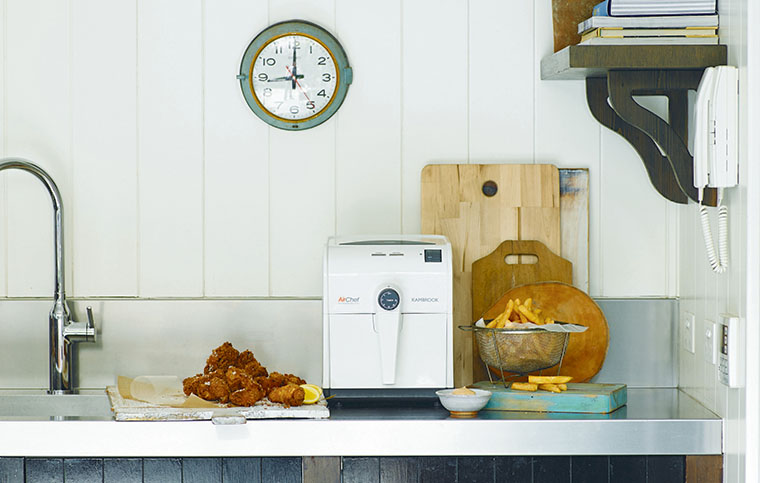 I’ve been eyeing them off the past year or two. Would they really make for healthier and easier cooking? Would their virtues actually justify the space consumed by yet another kitchen appliance?

After spending some weeks using one, I’m thinking they might.

Well, at least this one might: the Kambrook KAF200 Air Chef Air Fryer.

So what is an air fryer, and why have I found them interesting? Part of it might just have something to do with some of the figures shown in the screen shot of the little piece I wrote yesterday … but I’d rather not dwell on that. Part of it is because I love fried food, but have frequently found pan fried things disappointing, while I begrudge the expense of the oil when it comes to occasional deep frying. So the promise of less fattening, less expensive, and tasty fried food is so very, very attractive.

The Kambrook Air Chef is a fairly large kitchen appliance. Kind of cubical, it’s 300mm tall, 250mm wide and 310mm deep, including the front handle. Of course more room is needed at the front to allow the cooking basket to be pulled out.

Speaking of which, this is called a 2.5 litre cooker. My quick calculations, which involve a bit of estimation (you try measuring the capacity of an irregularly shaped object, with holes in the bottom so you can’t fill it with water), suggested 3.1 litres completely filled to the brim. So 2.5 litres sounds reasonable.

Anyway, there’s a metal basket (with the aforementioned holes) which sits inside a larger compartment with a few millimetres of clearance around the sides and bottom. Both the basket and the larger container have a non-stick coating. The basket clips into place. You put your food into the basket and slide the combined basket and holder into the body of the cooker. Then you set the temperature (up to 200 C is marked on the control) and start it up by winding the timer on the front clockwise to the required cooking time. The timer is marked up to thirty minutes, so longer cooking times will require the knob to be rotated again when the timer dings.

And then you just let it do its stuff. The fryer acts like a powerful fan forced oven, driving extremely hot over the food in the basket. Because everything’s so contained, and because air can be forced up from the bottom as well down from the top, cooking tends to be more even and quite a bit faster than achieved in a regular oven.

A chart in the Air Chef’s instructions suggests that the device is good for anything from frozen chips, through nuggets, meatballs, fresh fillet fish, up to a small (1.2kg) chicken. I didn’t try it, but apparently you can use it to bake quiches and cakes as well.

The chart suggests times and temperatures. Half a kilogram of frozen chips will take twenty minutes at 200 C. Four chicken drumsticks: 30 minutes at 180 C.

There’s some intervention required with some items. The roast chicken should be turned at some point. Chips and potatoes need to be given a shake.

I used the Kambrook Air Chef with potato gems, home made chips, salmon fillet and other random thinks and the results were really rather nice, and quite convenient. My normal technique for home made chips has been to cut them up (leaving jackets on), toss them in oil and salt, and then lay them carefully on a baking tray (with baking paper) in a fan forced oven. The last step of that process has been the most tedious. Just piling them onto the tray results in uneven cooking.

But piling them into the Air Chef’s cooking basket worked fine, with just one proviso. Despite the oil, there was a tendency for three or four of the chips to stick to the bottom when it came time to shake them. I was uncertain whether proper shaking meant they should be made to come clear of the basket surface, or whether they could be left in place. I opted for the former with a firm plastic utensil. That generally worked, but sometimes a cooked patch stuck to the surface while the rest came away.

This was more of a problem with the potato gems, although I think I may have dug in a bit early, and probably should have just left things alone after the quick shake.

There were no such problems with the salmon fillet. Following the instructions (15 minutes, 180 C), the results were perfect.

As for health, excess oil was able to drip through the holes in the bottom into the collecting tray. If excessive oil and fat levels are accumulating, you can pour out the excess through a channel left between the basket and container. But you’ll need to hold the food in place while you’re doing so.

Do remember, you can’t really mix things apart from, say, some mixed veggies. It’s mostly a one-thing-at-a-time kind of cooker.

Even when some of my potatoes stuck, clean up was easy in regular hot soapy water. No dishwashers allowed.

As with any cooking device, a little bit of experimentation and practice is required to get ideal results. But with the Kambrook Air Chef it’s easier than with many other cooking devices. I rather like it.

Overall
Features
Value for money
Performance
Ease of Use
Reader Rating1 Vote
Easy to use, inexpensive, versatile, and probably health enhancing
Another appliance to fit into your cupboard!
4.4