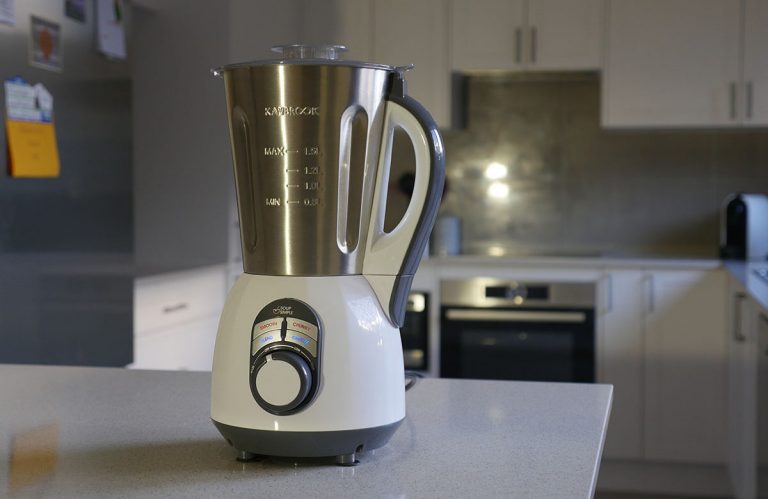 It’s the middle of winter, and it has been a nasty season so far. Come dinner time, I for one often want something that’ll warm me, and there isn’t much that’s better for that than soup. Which makes it a great time to check out the Kambrook Soup 2 Simple Soup Maker.

So, what is this redundantly named device? What does a soup maker do?

Kambrook Soup Maker is, in essence, a large 350 watt blender with a 900 watt heating element and a few smarts.

As you can see from the pictures herewith, it certainly looks like a conventional blender. But rather than a glass jug for holding the ingredients, it is stainless steel. And in addition to the usual cog in the base which spins the cutter blades, there are two four pin electrical connector blocks. These provide power to heat the contents of the jug, and also manage the lid interlock, which keeps the system safe.

The jug is also big. It has a capacity of 1.5 litres. Most of the recipes for soup provided in the manual or in the associated online recipe site, www.aperfectpantry.com.au, are for four people.

On the bottom of the unit are four suction caps. Press it down on smooth benchtop and you’ll have greater assurance that things will remain stable. The main control is on the front. This has a large knob for regular food processor functions: Off, Low, High and Pulse. As is the norm, Low and High can be switched on and left – but only for two minutes, lest the motor overheat. Pulse only goes for as long as the knob is held the right way.

Above that are four press-button controls. On/Off’s function is clear. Blend is just the normal blender function, but with a thirty second timer. Chunky doesn’t blend, but only heats for a fixed thirty minutes. Smooth does both. It heats for the half hour, and from time to time towards the end of that period it’ll do some blending for a minute or two.

Also supplied with the unit is a cleaning brush, which looks rather like an industrial toothbrush. The soup maker cannot be cleaned in a dishwasher. It comes with a two year warranty.

Incidentally, I was wondering what the deal was with the “Soup 2 Simple” name. When checking out the recipes at www.aperfectpantry.com.au I noticed that they were for the “Soup Simple Soup Maker”, a name which makes more sense. It seems that this unit is a sequel to the previous one.

How do you test a device such as this other than buy making soup? I chose the first recipe in the manual: potato and leek soup.

As with most labour saving cooking devices, a lot of the labour is not actually taken up by the device. So you have the usual peeling and chopping of potatoes and onions and leeks, and the stripping of thyme leaves from the stalks and the peeling and crushing of garlic, all performed by you. But that done, there was nothing left to do. No standing over the stove stirring the pot, no wielding the blender stick. Just press the “Smooth” button and wait for half an hour.

Before getting to the results, I should note that I was puzzled for a bit because I couldn’t get it to switch on. My fault: I should have read the manual. There is a hidden switch at the top of the jug handle. You must rotate the lid so that a lug on its edge triggers the switch otherwise the thing won’t switch on. That, of course, locks the lid down.

This is an important safety measure. The lid coming off a blender resulting in stuff sprayed around your kitchen is one thing. Hot soup being sprayed around is another.

So, with the lid properly in place, a press on the “Smooth” button was all it took. It first heated and then in the last ten minutes or so of the half hour cycle, it blended several times. Noisily, but there’s not much to be done about that. Then it sounded a tone and the whole thing was complete.

Off with the lid, pour into soup bowls, accompany with stone baked bread. Yummy.

The main ingredients were potato, leek and onion. The resulting soup was perfectly smooth, with no little leek or onion bits. Not the slightest lump. Potato which has been insufficiently well cooked prior to blending can still retain a slightly course feel. This had clearly been very sufficiently well cooked. Perhaps the cream and butter assisted a little, but nonetheless it was silky on the tongue.

Much of making a soup is in ingredient preparation, and no automatic soup maker can help your there. (Yet!) But if you like soups and you have space in your kitchen, and especially if you don’t already have a decent blender, the Kambrook Soup 2 Simple Soup Maker could be just what you need.