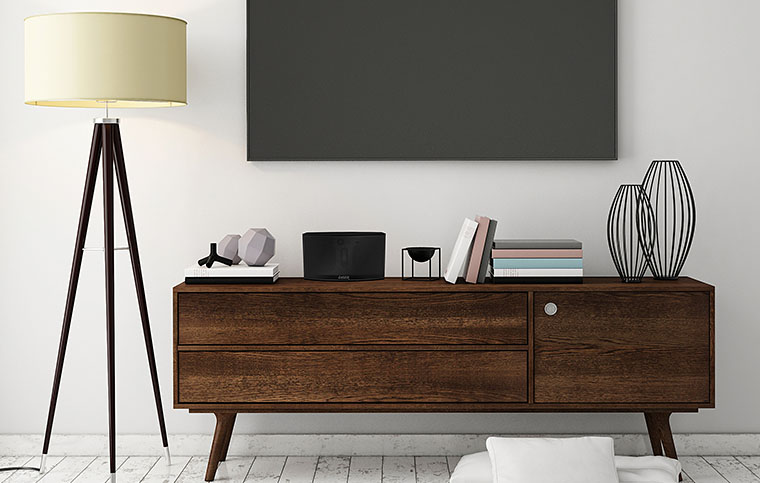 As we mentioned the other day, multi-room speaker systems are proliferating and many of them use proprietary systems which lock you into a single brand. Laser, a local company, also offers its own multi-room speaker products, but has chosen to go with the Qualcomm AllPlay system which means that devices from several other brands will all work as part of the system.

There are several Laser speakers available and an adaptor for your existing audio system. Here I’m looking at the Laser WiFi Adaptor (SPK-WFADAPTOR) and the entry level Wireless WiFi Speaker (SPK-WFQ10).

There are features common to just about all multi-room speaker systems: each device connects to the wireless network and is largely controlled by an app on a smart phone or tablet (the AllPlay Jukebox app is available for both iOS and Android). While I’m only looking at two devices and therefore up to two zones here, AllPlay actually supports up to ten zones.

The WiFi Adaptor is a small thing, just 105mm wide, 75mm deep and 30mm tall. There’s an indicator LED on top, Ethernet and optical and analogue audio (3.5mm) outputs on the back, and WiFi built in. The power input is Micro-B USB, so you can use a USB port to supply power if one’s available, or you can used the included power adaptor. You connect it to your network and plug one of the audio outputs into a stereo or powered speaker, and then you can just send music to it or control it as though it were just another AllPlay speaker. This is especially useful if you have a high quality stereo that you’d like to use.

The Laser Wireless WiFi Speaker (SPK-WFQ10) is a rather more substantial device, seeing as how it has a pair of speakers and amplifier built in. The speakers are 75mm full range units and it looks like there’s a bass reflex port on the front underneath the protective grille. Inside is twenty watts total power to drive it. The whole thing is pleasantly weighty at 1.55kg, suggesting a good build quality. On the top are touch sensitive areas for controlling mute, volume up and volume down. There’s no Ethernet port on this one: it’s wireless networking only (dual band). There’s also an analogue audio input (3.5mm), so it’s easy to plug in a portable music player that might not be on your network. It’s available in black and in white.

Both devices are supplied with analogue connecting cables with 3.5mm stereo plugs at both ends.

Setting up proved to be extremely simple. Both units have “WPS” buttons on them to allow password-free setting up if you have a similar facility on your router. I do, but using it involves too much running around so I used the manual method.

I plugged the speaker in and reset it to factory condition (it had clearly been used before), and installed the app from the Play Store to an Android tablet. Following the instructions, I changed the WiFi access point of the tablet to the temporary one established by the speaker, and then keyed the IP address given in the manual into the web browser on the tablet. This brought up a built in page which guided me through setting the network password. It released the tablet to its normal access point and then connected to the network itself. All that took, perhaps, one minute.

Then I fired up the app. It found the speaker and allowed me to give it a name. Within twenty seconds I had music streaming to it.

The WiFi Adaptor was even easier because, I’m presuming, it was the second speaker to be connected (AllPlay speakers almost certainly communicate between themselves as well as via the network). It was just a matter of hitting the “+” button in the AllPlay Jukebox app and following instructions. Twenty more seconds and I had music streaming through the Adaptor to my stereo system.

The best thing about this Laser system is how easy it all is. Things connected first time with no fuss at all. The app itself is easy to use. It’s amazing how unintuitive many multi-room music apps are.

With both devices connected, they could easily be “grouped” so that they’d play the same music, or left “ungrouped” to that each could play different to the other. When “grouped” the volume on each can be adjusted individually so that each room can have the appropriate sound level.

My only real complaint about the AllPlay Jukebox app is that it is designed only for portrait orientation. That’s fine for phones, but I prefer to use a dedicated tablet to control all my goodies, plus the goodies I’m reviewing. It has a nice little stand for landscape mode, has the power plugged in all the time and runs the useful “Stay Alive” app so it doesn’t switch off so long as the power remains plugged in. To use a portrait-orientation only app I have to unplug the power and then switch the tablet on again whenever it powers off.

The app can stream music from the tablet or phone to the speakers, or from music sources on your network, or from Internet music services. It worked fine with the DLNA (Digital Living Network Alliance) music served up from my network attached storage. There’s a long list of Internet music services on offer, from AllPlay Radio to Spotify. I have a Spotify Premium subscription, so that’s what I used. This started up the Spotify app and offered up the speakers – or grouped speakers – as “Spotify Connect” speakers, which means it streams the music directly from the Spotify servers rather than through your phone.

It turns out both devices are fully compatible with the DLNA standards, so I was able to use my favourite DLNA app to stream music to them as well. But I would probably never bother since the AllPlay Jukebox app worked so well.

The system supports very high quality music. Full 24 bit, 192kHz high resolution music streamed to the speakers from my network with no hiccoughs or other difficulties.

The Laser speaker won’t really be making much use of the high resolution aspects of that kind of music, but given what it is, it did a respectable job. The music was delivered with reasonable tonal balance and good dynamics and a good volume level. There was a decent amount of upper bass and a bit of bite in cymbals. This would make a fine bedroom speaker.

The WiFi Adaptor delivered high quality sound to my high quality audio system and, as far as I could tell, imposed no characteristics at all on the sound. Which is precisely how you’d want it to behave.

Laser is offering an excellent approach to multi-room audio with this system, delivering decent performance and good value for money using the excellent AllPlay system to manage things.