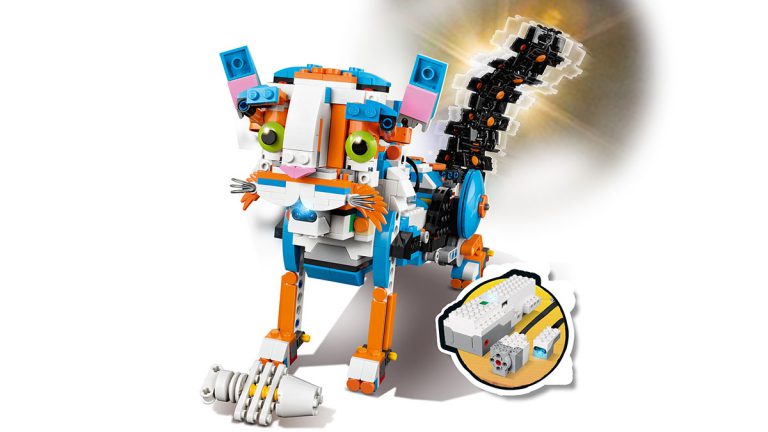 Truly, the humble reviewer of gadgets must suffer for his craft. Imagine being forced to spend time playing with Lego?

The excuse for this review? Lego Boost is programmable, powered Lego. If that’s not a gadget, what is?

Before getting to details, an overview. This is a large Lego set in which the instructions for the five main projects are provided by an app – iOS and Android supported. Then you can use the app to program movements by your constructions. Three of the parts contain sensors, so they can provide information which can be acted upon by your program. The Lego logo for the Boost is BUILD | CODE | PLAY.

Anything that introduces coding to young people scores a vote from me.

Lego doesn’t require much description. Most of what’s in the largish box is Lego bits. But these are more the bits one uses for vehicles and machinery, rather than the bricks for building houses and walls. That’s because it’s intended for making those moving things.

Lego says there are 843 Lego “elements” in the box. I didn’t count them but I have no reason to quibble. In addition there are three “Boost Bricks”. These are active parts.

The “Move Hub” is the largest. It’s 127mm long. No, that’s silly! This is Lego we’re talking about. Millimetres don’t matter. So, it’s 16 Lego studs long and 6 studs wide and four bricks tall. Although it’s not just one solid block. It’s shaped for use within various constructions. This contains the battery pack – you provide the six AAA batteries that are required – a motor, a tilt sensor, sockets for the other two electronic bits, and a control button.

The Sensor is a 2 by 4 double height brick (with various cut outs) with electric eyes at one end for determining distance and colour, and a ribbon cable at the other for plugging into the Hub.

The Interactive Motor is three bricks high and 4 by 6 studs, with a ribbon cable on one end and a motor to rotate a shaft at the other.

Finally, also included in the box is a board for your construction to navigate. It folds out to 950 by 470mm. There are some sixty activities available within the app. The whole thing is intended for children aged between seven and twelve years old (but I decided to pretend).

The first step was, of course, to install the Lego Boost app. Although the instructions mentioned only use with tablets, I did check the Play Store with my phone and it appeared to be available there. According to the Lego website, they’ve checked compatibility with the iPad Pro and iPad Air 2, both with iOS 10.3, and for Android, on a number of tablets. No phones mentioned, so I didn’t proceed. The other reason I didn’t proceed: the version I installed on the iPad Mini 4 I used for this review was a massive 929.2MB in size. In other words, nearly a gigabyte. Or 2.9% of the total storage available on my phone. One device is enough.

Of course, at that size it took a while to download. Probably not a good idea to install it using your 4G data plan. The app worked on the iPad Mini 4, which was running iOS 11.0.2.

The next step was to start building.

But that required starting the app, since it contains the instructions. It took several seconds to load and along the way asked permission to use the iPad Mini 4’s microphone. On starting the app, it initially only allowed one project, a simple vehicle with almost all its parts in one packet. (The parts are in about ten plastic packets within the box. Apart from the project, their distribution didn’t seem to track well with any particular project.)

It essentially put wheels on the hub, a (decorative) propeller on the motor unit on the back, and the sensor on the front. The app guided the construction very clearly, step by step, almost piece by piece, so it was very comprehensive.

Printed instructions inevitably require the compression of several steps into one picture, lest the document be too large to handle. That’s not the case with these digital instructions – so long as one can bear the size of the app.

Actually, this particular mini-project could have been printed out clearly. But later I started on building “Frankie the Cat”. I got up to step 139 – it looked like about three quarters of the way through – by midnight and decided to stop. Try printing out those ones!

If I did want to be picky, the one improvement I’d suggest was that early in the piece with “Frankie” there were sections construction, described in several steps, followed by the mirror image version of the same sections, also described in several steps. The slowest part in building is finding the bits amongst the 843. Looking for two of the same at the same time would have been more efficient than having to revisit the same search, so it would have been good if these had been merged.

At the end of constructing the simple project the app said to press the green button on the unit, whereupon the app connected to the Lego creation, presumably by Bluetooth (the connection was broken whenever I went to the settings page, so I couldn’t confirm). A bright blue light came on to show that the connection had been made.

And, of course, it turned out that a firmware update was required. But it only took about two minutes for that to be installed. Then the app uses an animation to entice the user to build a program consisting of steps: forwards, reverse, forwards left, forwards right and perform a 270 degree spin to the left (accompanies by a “Whee!” from the iPad). Building them was simply a matter of dragging them from the bottom of the screen to the middle. They could be reordered, and the screen could be used as a scratchpad to build up sections before dragging them into place. Actions and groups can be inserted. It only takes a moment of playing around to see how to manipulate things.

That was not a very extensive array of functions. Backing out of that unlocked the next step. That guide me into making a two step sequence that caused the device to back away quite smartly if an object appeared within about twenty centimetres of the front of the sensor. Another one acts as a gate to the allow one’s own sequence of movements if triggered in the same way.

Next were controls for the propeller (or, at least, the motor powering it), and an increasing array of motions along with some music (sort of, it’s more like an absent minded cartoon character nonchalantly singing) and a tooting horn.

You can also build multiple actions – toot and drive – on separate lines and trigger them both simultaneously.

And it all worked beautifully well.

Deadlines, other activities. Poor Frankie never quite made it to completion. Next morning I resumed. The app reloaded, and for a second I thought I’d have to just punch the advance button 139 times to get back to where I was, but there’s a slider so you can get there quickly. There were only another 40 steps to go (including another big chunk of mirror image duplication). Soon done, it turned out this wasn’t completion, but a way station. At this point you could turn him on and animate his face. He could look around, meow, and respond to a baby bottle (you build) with a lapping noise. That’s triggered by the colour orange of the Lego nipple.

That done, the cat’s limbs and then its tail appeared to be the next two steps. But they’ll have to await another time.

Obviously Lego Boost is not cheap, but then Lego never is. The cliché is that a toy like this will provide “hours of fun”. And that’s literally true in this case. Fun in making the projects. Fun in creating the child’s own. And fun in programming it do to things.

And fun in learning to build things which permit one to get reasonably easy access to the battery compartment when they expire.