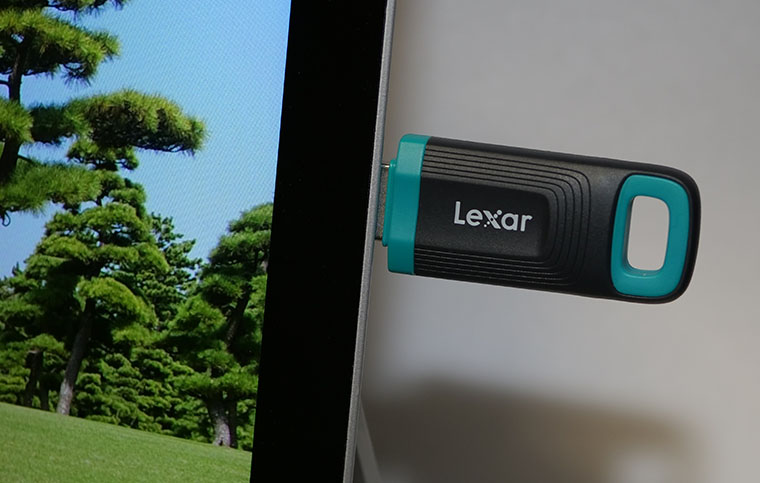 The Lexar JumpDrive Tough looks like a fairly standard USB drive, but it’s designed to be rugged. Specifically, says Lexar, it can cope with pressures of up to 750 psi, which is fifty atmospheres, and it can cope with temperatures from -25°C to 150°C, and it can be immersed in water at up to 30 metres. For those extremes, says the packet, the cap has to be on. Fair enough.

The cap is kind of rubberised and I found it hard to get off initially, because I was squeezing it for a better grip, which was in turn increasing its friction against the metal of USB connector. It works best grabbed on the wider dimension rather than on the flat. The other end has a decent sized loop for adding to a key ring or whatever.

Lexar says that the drive can be read from at up to 150MB/s and written to at up to 60MB/s. It comes with “EncryptStick Lite” software so you can encrypt everything on the drive, if you like, with 256 bit AES encryption. That’s pretty strong stuff. Don’t forget your key. Perhaps the NSA could eventually break it, but few others.

I used a bunch of video files for a speed test. There were 14 files and two folders, totalling 5.55GB. That package took 41.2 seconds to copy to my desktop’s SSD from the Lexar JumpDrive Tough for an average speed of 137.8MB/s. The coping was fairly smooth, starting at 149MB/s but with the rate starting to wobble a bit between that high and as low as 120MB/s. Looks to me like the read speed rating was pretty spot on.

Copying the same package back (after an eject and reinsertion) was a different proposition. It took 150.6 seconds for a respectable overall speed of 37.7Mbps, but as the Windows graph shows, it spent a lot of time running at nearly 90Mbps, slightly exceeding that a couple of times, and then would slow right down. What the graph doesn’t show is those dips were usually complete stops for a second or two. Some kind of wear levelling or other housekeeping going on inside? The dips didn’t seem to coincide with opening and closing files.

I repeated the write test, this time using a single large (2.55GB) test file and it also paused a couple of times briefly through the process. But managed a higher average speed of 56.3MB/s since there were fewer pauses.

This is a high speed for writing, so I’m not criticising it. If some kind of housekeeping has to take place to provide the promised security at the cost of a somewhat slower speed, fair enough. That’s why you’re buying the JumpDrive Tough. If you’re doing a Mission Impossible spy job and need to get those files onto USB before the security guards catch you, then spend some money on the Lexar P20, and copy the files onto the JumpDrive Tough later for greater robustness.

But how tough is it? I didn’t want to try smashing it with a hammer. Way too un-repeatable. So I figured I’d well,  boil it.

It is rated to survive temperatures 50 degrees Celsius more than the boiling point of water, after all. So I copied 29 files consuming 1.12 gigabytes of files onto the drive, boiled up a pot of water, kept it simmering and dropped the drive in (with its cap on) for ten minutes. Then I dried it off, let it cool off for twenty minutes and plugged it into the computer. It looked fine. A small splash of water came out when I pulled off the cap. I thought it was just some water caught between the edge of the cap and the main section. All the files were fine. I copied them to the computer.

But the drive was very, very unwell. After a minute Windows declared that “the last USB device you connected to this computer malfunctioned and Windows does not recognise it.” I realised that some water had gotten inside and tried drying it out, but I don’t think I was very successful. I kept tapping it on a table, and still there’d be a little more fluid, even after I’d applied a hair dryer for a while.

Sometimes the drive would work for a couple of minutes. Sometimes it would require a “Scan and Repair” which sometimes failed, and sometimes got through with an all-is-fine message. But in the end, it was effectively kaput.

I’ll put it aside for a few days and try again in case somehow any remaining water might have made its way out, but I’m not hopeful. If it does recover, I’ll return here and report it.

In retrospect, I have a feeling that the 150 degree rating might have been for dry conditions. Both water and temperature together appear to have been too much for it.

That said, it did its job. I boiled the thing for ten minutes, yet afterwards I was able to get off my original gigabyte-plus of files intact. My data was safe. Only the Lexar JumpDrive Tough was wrecked. I do see that as tough.

And try doing that with any other drive.