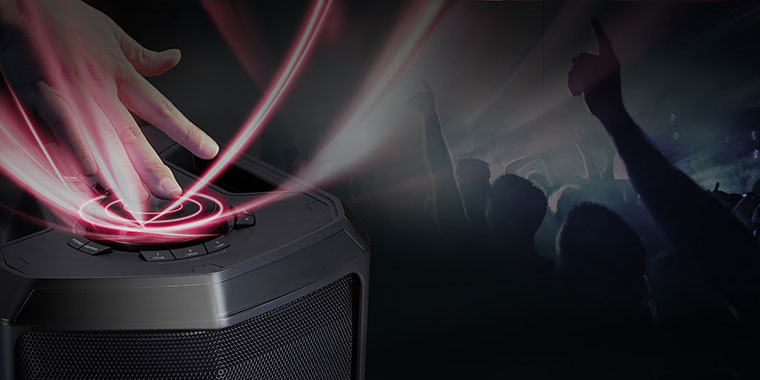 You won’t be under any illusions when you are listening to a music system called ‘X-BOOM Freestyler’ from LG. Especially when you plug what is more formally known as the FH6 High Power All-In-One Speaker into the wall socket and it lights up.

No illusions: what we have here is a large, brash Bluetooth speaker system with some interesting extra features. Broadly, these would be DJ features which I’ll return to shortly.

As LG says, this “is the modern day boombox”. It is certainly a big one. It’s around 820mm long, 320mm wide and 390mm deep and weighs a solid 17.2 kilograms. It’s designed to sit both horizontally and vertically with rubber feet in appropriate places for both. Inside are two bass/midrange drivers that look to be nominally 180 to 200mm in size, and two tweeters. Each of those is way down at the bottom of a tube that may be intended to act as a horn. There’s a bass reflex port for each woofer as well. LG says that the unit can deliver up to 600 watts RMS.

The case feels like thick, injection moulded plastic. It’s quite solid, neither flexing nor sounding hollow when rapped. A semi-transparent metal grille is over the speaker drivers. You need to be able to see inside because of the lights. Yes, there are multicoloured lights (LEDs I’d guess) on booms that hover over the larger drivers. They pulsate, illuminating the drivers with red, blue, white, cyan, magenta, green, pale yellow and white on a choice of seven patterns. There’s also a band of white LEDs that runs between the two halves of the speaker and they, of course, also pulsate. An eighth setting is ‘Off’.

In addition to Bluetooth (only the basic SBC codec is supported), the speaker has built in an FM radio tuner, a USB flash memory music player (MP3 and WMA only), a line level analog audio input and two quarter-inch jacks for microphones. The unit can be used for karaoke. There’s a basic ‘voice canceller’ circuit so you can dominate the singing in your favourite songs. You can also record the FM tuner and the analog input to a USB stick. The format is MP3 at 128kbps.

Finally, there’s the DJ stuff. On the top when the unit’s standing vertically is a large knob. Twist this and a very loud DJ-style scratching noise comes out of the speakers. Very, very loud. I made the mistake of not having my Bluetooth player up at a high level itself, so I had the unit turned up high. The ‘scratch’ noise made both the drivers and me jump visibly. It’s best to max out the volume on your Bluetooth source and control the volume with the X-BOOM’s own remote control.

There are also four DJ ‘effects’: Phaser, Flanger, Wah Wah and Delay. You might find them fun to play with … briefly. Perhaps when used with the karaoke function …

I did most of my listening using the Bluetooth connection. You can pair a compatible phone using a Near Field Communication tap.

One excellent and rare feature is the ability to have up to three Bluetooth devices paired with the speaker at the same time. For the most part, whichever device is playing has priority. But if you start the second device then the second one’s sound will start coming through almost instantly when the first one is paused. Occasionally the Android tablet I paired first seemed to be able to interrupt playback from the Android phone I paired third, but not the iPod Nano I paired second. Users ought to experiment with their devices to determine what priorities they have.

When you try to add a fourth device, it is promptly rejected. To add a new one you have to properly disconnect one of the current devices using its Bluetooth control panel, or turn its Bluetooth function off. Then the speaker becomes available to the new device.

Allowing three devices to be paired really adds to the unit’s flexibility. I frequently use the iPod Nano for podcasts, and prefer to use a tablet as a controller, but sometimes I’ll want to connect the phone instead. With this unit I can do all three with no fuss. Just press the ‘Stop’ button on one and ‘Play’ on the next.

And, yes, the sound of the unit was rather bold, even brash. It went quite loud, roughening up the louder it went. Great for parties, and perhaps not quite so good for refined listening. Speaking of parties, there’s a wireless link feature so you can connect a slave X-BOOM to double the sound.

LG specifies the system frequency response at 80 to 20,000 Hertz. The mid bass was stronger than a normal balance would demand, again good for parties. I thought the bass extended somewhat below 80 Hertz. Occasionally there was a good thump from a bass guitar or kick drum. It tended to be a little monotonic down there, but rhythmically effective.

The midrange was a touch on the light side, so by comparison the treble delivered the occasional piercing cymbal, or a little zinging sibilance on female vocals, at least when played loud. There’s a special source setting for LG TVs. When I switched to that, it only took a minute in the menus of my two year old LG TV to set it to use the speaker. Dialogue was nicely clear.

You can use any old music player on your Bluetooth device, or LG’s ‘Music Flow Bluetooth’ player software. The latter has a good set of controls over the unit when it is connected, allowing you to change inputs and other settings.

You won’t find too many all-in-one Bluetooth speakers systems that will deliver such bold party sound (complete with a light show!) as this one, at this price.

Overall
Features
Value for money
Performance
Ease of Use
Reader Rating1 Vote
Bold sound; Goes nice and loud; Can pair up to three Bluetooth devices at a time; Easy to use; Karaoke function; Can record some material to USB
Not really for audiophiles; Only uses SBC codec for Bluetooth
4