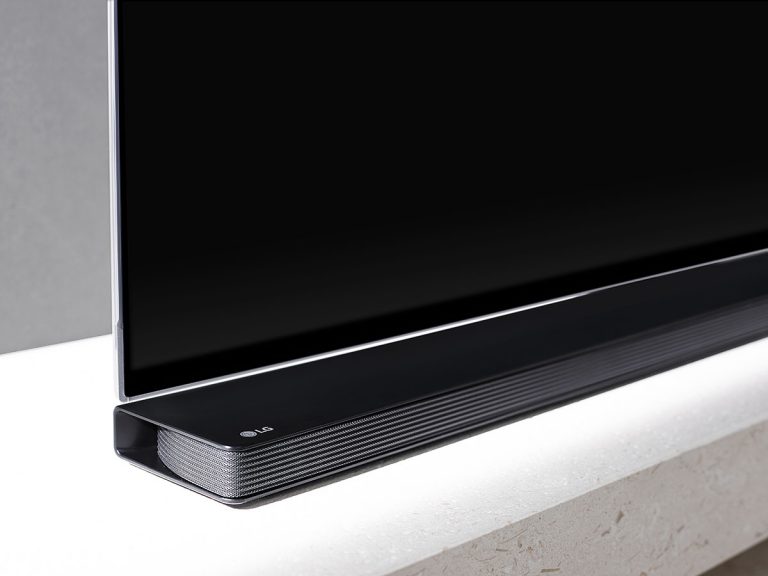 There’s a problem with most TVs: the quality of the sound they produce. It can’t really be helped. High quality sound and super slim panels just don’t go together. Which is why sound bars have become increasingly popular. These off-load the sound delivery to a device engineered for the task. These days, the better sound bars have become network and Bluetooth connected, so they can do more than just improve the TV’s sound.

Let’s look at LG’s efforts in this field by focusing on it second-from-the-top SJ8 wireless sound bar.

This is a two box system with a separate subwoofer and sound bar.

TVs have been becoming progressively closer to the bench in recent years. A decade ago, it was not uncommon for the bottom of a TV, when mounted on its stand, to be a good 100mm or more clear of the bench upon which it was resting. These day you’re lucky if its 40mm. That presents a difficulty for sound bar designers. If the bar is to go on the bench in front of the TV, it can’t be so tall as to block the bottom of the screen.

The LG SJ8 deals with that design issue by being very slim indeed. It reaches just 38mm above the bench. LG recommends it for TVs 55 inches in size and above because of its width, which is 1220mm. You’ll also need a little over 105mm in depth in front of your TV if that’s where you’re placing it.

But it can also be wall mounted if you prefer.

Across the front of the sound bar is a grille with a strong horizontal motif. The sound bar seems to be constructed of a very solid plastic with a metal chassic, but it looks very classy, and nicely understated, with a dark grey finish that should go with just about any TV. The bar weighs a little less than three kilograms.

LG’s a bit light on providing technical details, other than indicating it is a 2.1 system, with 2 x 65 watts of Class D power for the sound bar and 170 more watts of Class D power for the subwoofer. As far as I could tell from the sound, there are two speaker drivers in the sound bar, one near each end for a good wide stereo spread. I could make out the subwoofer driver through the grille. It looked to be a nominally 165mm unit.

There is a single HDMI input and a matching HDMI output. That output supports the Audio Return Channel, so your TV can feed its sound back down to the sound bar that way. If your TV doesn’t support ARC, you can use the optical digital audio input instead. For network music there’s an Ethernet socket but you may well prefer to use the built in WiFi. Bluetooth is also supported, which might be useful for connecting to some TVs or music players.

There is no analogue audio input. You will not be able to play an old iPod Classic through the system.

The sound bar comes with various useful bits. A cardboard template, for example, in case you’re affixing it to a wall, along with small wall brackets. The optical audio cable for connecting to your TV and alone save you $40.

It also comes with a small remote, while the basic controls are also hidden away on the body of the sound bar, at the top right rear. Markings show you when to put your fingers.

Connecting the subwoofer to the soundbar literally could not be easier. I’m not exaggerating. It is factory paired, so there is nothing to do other than plug it into the power. Should things go wrong, there is a “pairing” button, but I didn’t need to play with that. I plugged both parts in, a green light on the back of the subwoofer flashed for about ten seconds, and then it settled down and connection was complete.

Connecting the unit to the network wirelessly may have seemed daunting, given that the unit does not generate an on-screen menu system or other display. But it was just a matter of installing the LG Music Flow app on an iPad Mini 4 (there’s an Android version available as well) and following the instructions. All went perfectly.

It turned out that there was a firmware upgrade available, but installing that was just a matter of pressing the “Accept” button on the app and waiting ten minutes for the firmware to download and install.

The sound bar works with your network in three principle ways. One is as a Google Cast-enabled music player, so it’ll work with all manner of Chromecast-supporting apps, such as Spotify. One is as a “DLNA Renderer”. Which means that you can use DLNA player software on an Android (or even iOS) device to send music to the SJ8 from your network music server. In that role the SJ8 supports all manner of formats, including FLAC, AIFF, ALAC, WAV, MP3, WMA, AAC and Ogg Vorbis. FLAC, AIFF and ALAC (that’s Apple Lossless) are supported up to 24 bits and 192kHz sampling, which means you’ll be fine should you have a collection of high resolution music.

The other way is as part of LG’s Music Flow multiroom system. That’s based on the same app used to set up the speaker in the first place. If you have other LG Music Flow speakers you can distribute different music to them, or group them so that they work together.

I gave the speaker a good workout in all three modes. It worked effectively with all three. I’ve used the Music Flow software in previous years and was quite unimpressed with its organisation, but LG seems to have revised it extensively and it’s now pretty easy to use for the main things you’ll want to do.

It warrants a bit of work digging around through the settings and controls but you’ll soon be able to adjust the bass and level controls, and even set things like audio delay (so the sound matches the picture displayed by the TV, should there be any sync problems) and change the name of the speaker. It defaulted to Soundbar 1, which I found pretty uninformative. I renamed it to LG SJ8, but many normal users will give it a more useful name like “TV Room” or “Loungeroom”.

The sound with music was general pretty impressive. Accurate and smooth and room filling. I thought it lacked a bit of high frequency bite, so I advanced the treble control to balance things out. The tone control on the remote was a bit tricky, only working some of the time and otherwise switching off the moment it was invoked, so I did the adjustment using the app.

The subwoofer balance was fairly good in the default position, but you can turn it up or down quite a long way if you have a preference. It was surprisingly extended, giving decent treatment to kick drums and the bass line of Eminem tracks.

All my Spotify music flowed smoothly. As I’m writing right now there is 192kHz FLAC-format music flowing to the SJ8 and sounding very musical.

The only limitation is perhaps volume level. As I said, engaging, room filling levels are readily achievable, but head bangers might not find quite what they’re after.

I watched a bit of TV using the sound bar, with the sound being delivered via the HDMI ARC connection. That worked well and was a very marked improvement in sound quality from the TV’s own speakers, as you’d expect.

Finally, I watched the opening sections of John Wick 2 … on UltraHD Blu-ray. The sound bar passed through the Ultra High Definition, High Dynamic Range, BT.2020 colour system signal perfectly. Between it and the UltraHD Blu-ray player it worked out a suitable audio format – the default on this disc is Dolby Atmos – and produced coherent, clear and, yes, exciting sound during the full-on action scene. Again, the maximum level was room filling, but I probably would play things a few decibels louder than that on my system for maximum impact. (But my normal system would set one back more than ten times the price of the LG SJ8 … so I can’t really complain.)

The LG Music Flow SJ8 wireless sound bar is a well designed system suitable for music and movies played at good full levels. Importantly, it looks like a quality bit of kit as well.