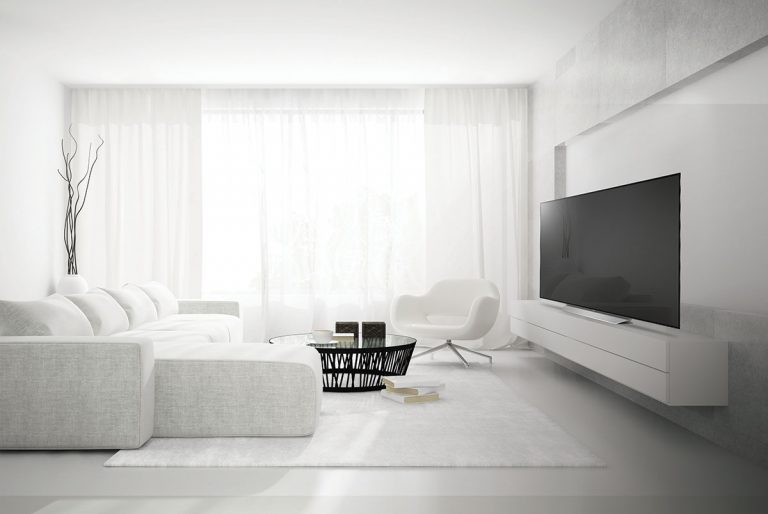 A few weeks ago I related my impressions from the brief time I spent with LG’s second-from-the-top OLED TV, the LG Signature OLED65G7T. That one costs $9099. For a saving of more than $2000, you could instead consider the “entry level” 65 inch OLED, the LG OLED65C7T. Rather than an evening, I’ve been able to spend a few weeks with this one. And, unlike my look at the G7T, I’ve been able to use the C7T with real UltraHD Blu-ray discs playing on real UltraHD Blu-ray players (three different ones, none of them from LG).

The panel of course uses OLED – Organic Light Emitting Diode – display technology. Unlike LCD displays, the cells that create the pixels of the image generate their own light, like plasma TVs of old. That means they aren’t trying to block a backlight at the pixel level, which LCD TVs do with only partial success. The benefit is that each pixel can be set to completely black, independently of every other pixel.

Plasma TVs could not wind down the pixel brightness smoothly to zero, and then back up again smoothly. That made achieving dark levels difficult. OLED technology can. The net result is an effectively infinite contrast ratio. Perfect black levels also allow a particular richness to colour reproduction since there is no leakage of backlight to wash them out in any way.

This is an Ultra High Definition OLED panel, which uses four individual OLEDs – red, green, blue and white – for every pixel. With 3840 by 2160 pixels by four OLEDs per pixel, this has the picture being created by more than thirty three million tiny glowing spots of colour.

Pixels switch on and off extremely quickly with OLED screen technology. LG says less than a millisecond, but in general it’s less than a tenth of that. That makes for higher precision with high frame rate material. It would also make this TV brilliant for use with active 3D technology. Unfortunately, as with most of the other big companies, 3D has been abandoned in this model.

Another thing for the future that this TV offers is Dolby Vision. That’s like High Dynamic Range, but smarter, with a greater range, so that it can adjust dynamically to the material, frame by frame. You can find some movies encoded with Dolby Vision on Netflix and AmazonPrime, and Ultra HD Blu-ray discs are supposed to be appearing this year. Some companies have yet to commit to it.

Running down the model comparison list between this TV and the G7T on LG’s website, we can see that the differences are…what? Almost everything is identical. The same functions – for example, Multi-view (two inputs, or TV and an input, side by side on screen), OLED Gallery (picture slide shows), Time Machine (plug in a hard drive to record or time-shift TV programs), Miracast and WiDi (so you can wirelessly cast your Android phone or Windows notebook screen to the TV), WebOS 3.5 for smart features, Netflix app, Audio Return Channel for feeding sound back to a home theatre system, headphone output, optical digital output, USB inputs, and dual band WiFi. The same broad range of media types can be played back from the network or USB, and the same apps can be run under the same WebOS 3.5. If my impressions are accurate, the speed and responsiveness is the same, suggesting that the same processing engine has been employed (which is a quad core CPU).

That’s quite a list of similarities. So what are the differences? For starters, the G7T gets an additional compact remote control. Its main “Magic Remote” is functionally the same, but looks prettier. It has a much fancier sound system too with 60 watts rather than 40, and eight speakers rather than 4, with a pair of height speakers to project sound upwards for Dolby Atmos playback. It’s a little larger, physically, even though the picture size is the same, and quite a bit heavier.

Other things that set these OLED models apart are the design thinness of the base of the panel. Like the G7T, most of C7T is less than 5mm thick. It’s like a pane of glass. At the bottom it widens to 47mm thick to provide space for the electronics, and the wall mounting points. The G7T has a very different, wider base design, and is certainly made with more metal. Design-wise, while both look fabulous, the G7T is on another level and feels very premium.

The picture produced by this TV was stunning. I watched the new Ang Lee drama Billy Lynn’s Long Halftime Walk with this TV on UltraHD Blu-ray. Again, stunning. That movie is so far unique in being the only movie offered with a “High Frame Rate”. Movies are shot and shown at 24 frames per second. Have been for decades. Billy Lynn was shot and is provided on UltraHD Blu-ray at 60 frames per second. You may not have thought so, but it makes and enormous difference. There’s a fluidity to the motion, and a capture of subtleties that might be lost between 24fps frames, that lifts the experience into something startlingly real.

With this TV, all that was delivered, along with extraordinary picture detail.

More stylised colour palettes were handled superbly as well, such as that in Mad Max: Fury Road on UltraHD Blu-ray. Both of those movies implement High Dynamic Range and the wider colour available in the format: BT.2020. The panel supports 10 bit colour natively, which means each of the primary colours can have over a thousand levels, rather than 256. So in total, more than a billion colours can be displayed.

On Mad Max: Fury Road the deep blacks and orange hues of the desert, contrasted against infinite blues of the clear sky, were intense and breathtaking.

But even on regular Blu-ray – which is limited to 8 bit colour – the results could be impressive. The strange UK conspiracy thriller Utopia uses a fascinating processed colour palette that is positively glows with unexpected colour. This is presented gorgeously on the 65C7T TV, bold and unlimited.

At every stage, the brightness of the TV was excellent.

In short, this the LG OLED65C7T provides picture quality as good as it gets, for the moment.

As to smart TV stuff, I remain a great fan of LG’s WebOS 3.5 and the Magic Remote. I find it far easier to use this remote to simply point and select things on the screen than competing systems of touch pads. It’s fast and accurate and can be mastered in a couple of minutes. The current model has number keys on the remote so that most things one needs are available. Those things that aren’t pop up when needed.

For example, if you want to record live TV (and you have a disk drive plugged in), you press enter and on screen controls will appear for recording.

I was able to “cast” my Surface Pro screen to the TV using WiDi in just seconds, and once connected there was almost no lag at all. Normally, there’s the better part of a second in lag. The Samsung Galaxy S7, though, couldn’t connect, although it could find the TV.

Previously I’ve had a couple of complaints about LG TVs. Specifically, the EPG contents disappearing when you switch the TV off, so you have to go to each station when you switch it back on so that it is “repopulated”. And that LG TVs didn’t support the auto lip sync capability of modern home theatre receivers. That’s the system where the TV tells a home theatre receiver, via the HDMI connection, how much it ought to delay the sound to make sure that it is in sync with the picture. That always had to be dialled in manually.

So I dutifully went to check that these problems remained, fully expecting that to be the case, only to find that they were both fixed. Set lip synch on your home theatre receiver to “Auto” and between it and the TV, it’ll be taken care of. And with the “Quick Start” feature of the TV enabled (that’s the default setting) the EPG is retained, and just refreshed, each channel when you happen to tune into it.

So I’d say that the LG OLED65C7T is presently the best TV on the Australian market, short, perhaps, of the even more expensive LG models.