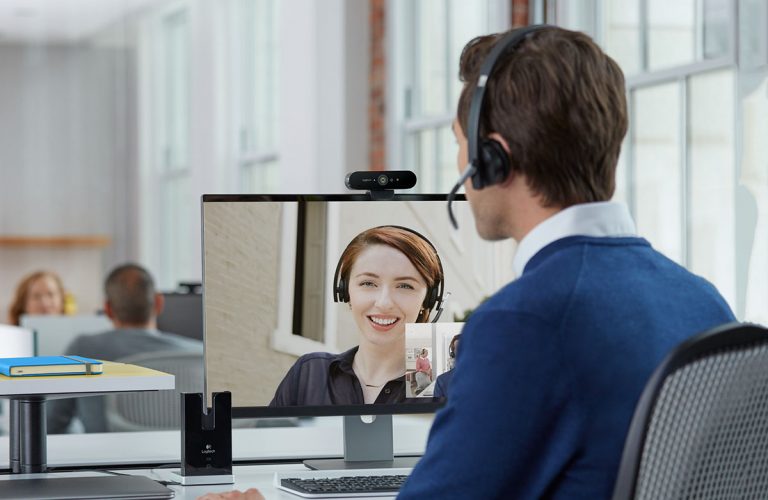 For years I’ve been using a Logitech C910 webcam. It took its place atop my then desktop computer’s then monitor back in 2011, replacing a series of less than satisfactory webcams from single-product companies which have long since disappeared.

I’m thinking I chose right because the Logitech C900 series is still around, fundamentally the same although tweaked somewhat in the software, these six years later. But times move on, so perhaps it’s time to upgrade beyond the full high definition of the C900 series to 4K.

That, and Windows Hello, are two reasons to make the shift to the Logitech BRIO 4K Pro Webcam.

The BRIO is part of Logitech’s business range, although the pricing (now $299.95, down from $379.95 when first launched) isn’t out of range of the home enthusiast.

Amongst the processing features, the camera provides “background replacement”, presumably to hide one’s grotty environment from those with whom one is conversing on Skype.

Two microphones are built in and these provide noise cancellation.

The camera field of view is 90 degrees, which can be brought down via the control software. It supports Windows (7 and later), MacOS 10.10 or later and the Google Chromebook. To use the 4K functionality, your computer will need a USB 3.0 or later port.

The power and comms port on the camera itself is USB Type-C. A 1.5 metre USB-C to USB 3.0 cable is provided with the package.

The camera comes with a bendable rig that allows it to rest fairly securely on top of a monitor. It can be pulled off that and mounted on a tripod using a standard camera mount. It also comes with a little plastic shield that can be attached to the top of the camera. That has a flap on the front that can be folded down to cover the camera lens and the infrared sensor. Just in case you’re worried that your camera might be hijacked in some way, or perhaps you want to pretend that video communications aren’t possible.

Also provided is a soft carry pouch, and a single slip of paper illustrating physical installation. If you want to use Logitech control software, you’ll need to download it.

I didn’t need to start installation with any de-installation. With the most recent computer change I discovered that my old Logitech C910 webcam worked automatically via plug and play as a Windows “Imaging Device”. The driver Windows installed was from Logitech, dated all the way back in 2012. The camera works perfectly well with the Windows Skype app and the Windows Camera app, so I hadn’t gotten around to installing any control software. So all I had to do was unplug.

And then find a USB 3.0 socket. The old camera had been plugged into a USB 2.0 socket on my monitor. Dealing with 4K video, it’s probably best to connect straight to one of the motherboard USB sockets. Mine had a spare USB 3.1, so into that went the plug.

In less than ten seconds the camera was installed. According to Device Manager, it was using a Microsoft driver, dated way back in 2006. Wrong! I looked too soon. Installation hadn’t been completed. A Windows pop up then told me the camera installation was complete, and when I checked Device Manager told me it was now using a Logitech driver from April this year. That made more sense. I’m guessing that in the total of thirty seconds or so it took for the installation Windows had gone away to download the driver from somewhere on the Internet.

Installing hardware is so easy these days!

A quick check revealed that the BRIO’s microphone was properly selected as the “Default Device” for Windows recording and that it was working fine. The camera worked perfectly well too. The only thing I needed to change was the “Flicker Reduction” setting in the camera app. It defaulted to 60 hertz, which made a beat with my room lighting. Setting it to Auto or 50 hertz fixed that, giving a smooth picture on my monitor. (It also fixed it for Skype test video, suggesting that the adjustment works at a more fundamental level than in the app).

But what else can the camera do? For that there were two kinds of software to download: Logitech Camera Settings and Logitech Background Replacement. Together they come to a little more than 200MB.

Ah, software is so big these days!

This software seems to be general to all Logitech webcams. Logitech Camera Settings is where you set the field of view (the default is 90 degrees, with 78 and 65 as options); switch on and off High Dynamic Range, choose that anti flicker setting (so it seems that the Camera app did hook into a deeper setting of the camera) and choose between Standard and Widescreen aspect ratio. There are also settings for things like brightness, colour, contrast, white balance and focus. The last two default to Auto.

If you run Logitech Background Replacement, you can select from eight different backgrounds, or blur the background, or import some of your own pictures to use as a background. The software will then identify your head and superimpose it on the selected background. This software is installed as a modification of the standard Logitech Camera Settings, adding an additional tab and a switch.

I could not get the replacement background to work with Skype or with the Windows Camera app. In any case, the edges around my head were very approximate indeed, so I wouldn’t want to use it in circumstances in which having a good background might be important.

The Windows Hello functionality was spot on. The recognition on my camera was incredibly fast, virtually instantaneous, even in darkness.

Picture quality? Pretty good. For a webcam, amazingly good. It works well in low light conditions too. I was trying to see if the camera would feed something from its infrared sensor to the Camera app in Windows if the light level was too low, but I couldn’t actually get it low enough to trigger that, simply because of light from the screen, even though the room was dark.

Is 4K needed today? Not really. The main advantage of this camera for today is the Windows Hello support. But if you’re buying a webcam today, why not think about tomorrow as well? After all, my old Logitech webcam is still running perfectly after six years. I don’t think it’s unreasonable to think that in six years time 4K video conferences will be expected. The Logitech BRIO 4K Pro Webcam will allow that right now.