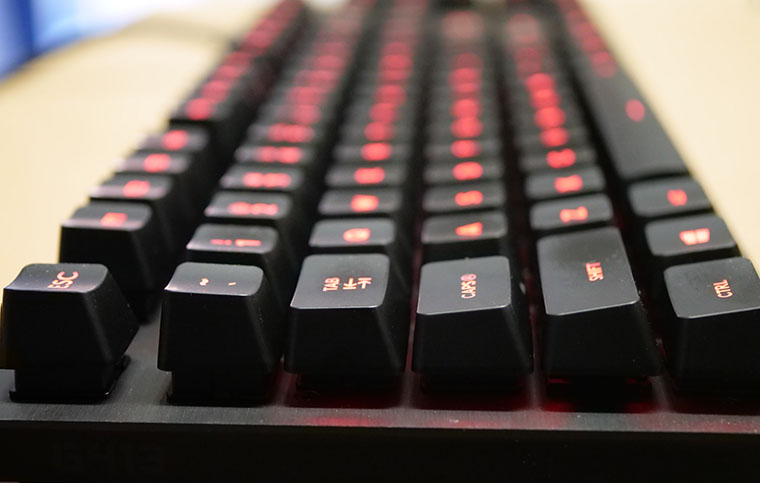 Some months ago I reviewed one of Logitech’s high end gaming keyboards – the Logitech G810 Orion Spectrum – and discovered that, in addition to gaming it made a great typists’ keyboard.

But perhaps around $250 is a bit pricey? Now Logitech has introduced the G413 keyboard with some of the same virtues for a more affordable $149.95. Let’s bash out some words on it to produce a review, shall we?

First, though, surely some features have been shed to achieve the saving. And indeed some have … to be replaced with different, but effective ones.

The core elements remain the same. They are of course the keys. This is a mechanical keyboard, which means a good solid travel distance of 3mm, and it uses the same Romer-G mechanical switches as the more expensive keyboard. These actuate at 1.5mm, halfway through the full travel. They are tested to seventy million presses. I don’t think they’re going to let you down.

But they are not set into the body of the keyboard. Instead they rise above its surface like a hundred little squarish mushrooms. Black mushrooms with colourful highlights.

The top of the body of the keyboard is made of aluminium alloy – 5052 grade, which has 2.5% magnesium and 0.25% chromium in the alloy – although there are two models with very different finishes. The Logitech G413 Silver has a brushed aluminium finish, and the lights within each of the keys are silver/white. The review unit was the G413 Carbon, on which the brushed aluminium is anodised black. The lit keys glow red through the characters on their surface, with a soft underglow around their base.

In both cases the brightness of the backlighting can be set to one of five levels, including completely off.

The keyboard is full, with a standard Windows complement of keys, including the numeric keypad and all the function buttons. Additional media control functions are accessed on some of the function keys and those three almost surplus keys – print screen, scroll lock and pause – using an FN modifier. You can also select a Games mode which disables the Windows, FN and context menu keys, since these just get in the way during games play.

But you can further modify te keyboard by coosing any keys on te keyboard and aving te Games mode stop teir operation. As you may ave noticed, it even works on regular caracters, suc as te letter “”.

You use the Logitech Gaming Software for that. It also allows you to assign macros to function keys and to adjust the brightness of the backlight (this simply replicates the direct control). One cool function, but I guess one of little practical use, is the “Key Press Heat Map” which counts up the number of times each key is pressed and shows you as a kind of infrared-style map which keys you’re working the most.

As a gaming keyboard, it has one extra rather special feature: It comes with replacement key faces for the numbers 1 through 5, and the letters Q, W, E, R, A, S and D, along with a key puller. Why? Those keys are the ones most likely to be used in games and the replacements have a different shape to their faces, with deeper indents in their centres for more secure location of your fingers.

The keyboard is far from wireless. It comes with a cloth wound 1.8 metre cable that splits into two at the end so you can plug it into two USB sockets on your computer. One is for the keyboard itself while the other connects a USB socket on the keyboard as an extension (USB 2.0 supported). That could be quite the convenience. I see that Logitech also has a high-end gaming mouse out which uses a cable. This socket would suit that perfectly.

There are also some channels on the underside of the keyboard to keep the cable of a mouse, or perhaps a headphone rig, tidy.

Which brings up the question: why wired? The obvious answer is that the backlighting of the keys wouldn’t be great for battery life in a wireless keyboard. But I suspect another reason is latency. Wireless connections might add too small a time lag between action and response for us to consciously notice, but a millisecond or even a half can make a difference in the final score of a game.

The base of the keyboard is very solid. In use there was not the slightest feeling of movement of flex. Nor was it creaky like so many inexpensive keyboards. But it is a mechanical keyboard so the keys tend to be a little clackier than some of the most refined conventional models. That’s not something I mind at all. But I did wonder briefly why sometimes there was a hollower, stranger sound. It turned out that when my keyboard-wide wrist pad was pushed up against the edge of the keyboard, this seemed to change the shape of the resonant space under the keyboard, thereby changing the sound. It also varied depending on whether or not I had the rear legs out to cant up the rear of the keyboard.

It felt great to my fingers. I pounded away, sometimes I touched softly away, and regardless it captured my strokes in a way that gave me confidence. I do have bias towards mechanical keyboards. Perhaps it’s to do with learning to type many years ago (25 words a minute, no errors, or find a new job!) on a massive, mechanical Olivetti typewriter. I can punch out the words well enough on the keyboard of a new MacBook Pro, with virtually no travel at all. I just feel better when the keys move a significant distance.

Because the point of actuation is just 1.5mm down, I did have to be a little careful not to rest things, or my fingers, on the keyboard because it was pretty easy to accidentally auto-repeat a character through a few pages if you don’t pay attention.

Initially I thought that having to use a function key to access the media control keys would be a pain, but at least for righties like me it turned out to be easy. That’s because the FN key is on the right between the ALT and context menu keys rather than the usual position on notebook computers, which is to the left. In fact, I couldn’t find it at first because the left side was where I just assumed it would be.

The media control keys – play/pause, stop, skip forwards, skip backwards, mute, volume up and volume down – are the secondary functions of the F9 to F12, Print Screen, Scroll Lock and Pause keys. And they are, of course, the right-most keys at the top of the keyboard. It proved very easy to whack my right thumb on the FN key and reach the first four very easily with my middle finger. The volume and mute keys are a bit more of a stretch, but I don’t use those anyway because I make sure my DAC mostly gets bit perfect digital audio, which means a direct connection bypassing those controls.

Obviously this is not the cheapest keyboard in the world, but it is a great way of getting into the quality and feel of the Logitech G810 Orion, without the price tag. And with things like the game-orientated replacement keys and the useful USB extension port, it strikes me as a bargain.