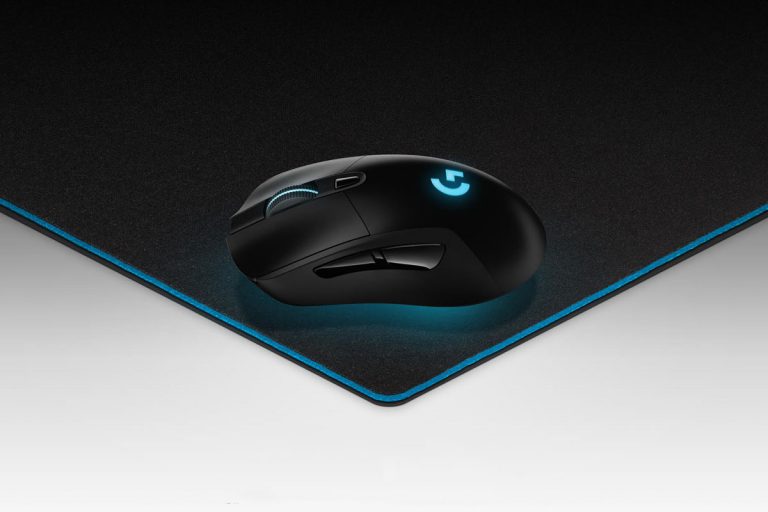 I usually have a Microsoft Bluetooth mouse connected to my Surface Pro 4, and it’s frustrating how much I have to shake it to get it to connect and start things up. Must wireless mouses necessarily be slow? Indeed, not, as demonstrated by the Logitech G703 Lightspeed Wireless Gaming Mouse

Clearly Logitech keeps its gaming devices and productivity devices as entirely separate things, even though the gadgets often perform the same basic function. If you go to Logitech website you’ll search for the G703 in vain if you look under mouses. You’ll have to click on the Logitech G logo at the top left to get to the gaming site, and there you’ll find the fancy gaming keyboards, headsets and, of course, mice.

The G703 is second from the top of the Logitech gaming heap. As the name indicates, it’s wireless. But it’s also wired. That’s because it is powered in a very different way to most wireless mouses. Two very different ways.

Wireless mouses typically just use a regular disposable AA battery for power and often compete on the basis of how long it will last – often more than a year. The G703 uses a modest rechargeable battery. The Logitech Gaming Software app gives an estimation of how long it will last. That depends on the settings, as we’ll see. It is certainly not more than a year, nor a month, nor even a week. But more than enough for a gaming session.

You see, the trick here is that it comes with a detachable cable – it’s a nice, cloth bound one and at 1.83 metres, a decent length. There’s USB at one end and Micro-B USB at the other. The Micro-B end has a kind of stabilising spade around it. When it’s plugged into the mouse, it moves very little.

You can use the mouse like that, plugged into the computer as though it were wired. It’s flexible and fast that way. Or you can use it that way for an hour or two until its charged up, then pull the plug. You leave the computer end plugged in, and plug the Micro-B USB end into the included Micro-B USB adaptor, into the other end of which you’ve plugged the tiny Logitech USB adaptor, which is of course also included.

That adaptor looks like a standard Logitech “Unifying” adaptor, but appears to use different technology in order to ensure the higher speed introduced with Logitech’s G900 Chaos Spectrum mouse. It’s rated at a 1ms report rate. That is, it can track at a thousand times a second.

But back to power. The other way of using it makes it permanently wireless, never having to be plugged in. For that you’ll need to buy the Logitech PowerPlay Wireless Charging System. This is a 321 by 344mm mouse pad which wirelessly charges compatible mice in use on its surface. Only the G703 and the more expensive G903 mice work with it. That’ll cost you $199.95. But it provides both an optimised gaming surface and freedom from ever charging (or putting batteries in) your mouse.

In addition to the standard left and right buttons and scroll wheel (which is also pressable, of course), there’s a small button on top just aft of the scroll wheel and two more on the left side. Apart from the left and right buttons, they can all be assigned to other functions, from a range of mouse functions, keystrokes or even multiple keystrokes via the keystroke recorder. Amongst the mouse functions are the kinds of things you might expect, like scrolling or replicating the standard clicks, things seemingly unrelated but convenient like changing the sound volume or playing and pausing, and very mouse specific things such as shifting the dots per inch resolution of the mouse, or switching between the three sensitivity, report rate and button assignment profiles you can use.

Also, if you aren’t a fan of extra buttons, you can just make the ones you don’t want “Unassigned” so that they do nothing.

All those things, along with the lighting in the scroll bar and Logitech “G” logo (you can choose the colour), the dots per inch sensitivity level and the “report rate” – the number of times per second the mouse reports its status to the computer – are adjusted using the Logitech Gaming Software. That’s the same software that you use for Logitech’s gaming keyboards, Brio webcam and headsets. It brings up relevant control pages for all detected compatible Logitech equipment.

I’ve got to say that this alone provides a fairly strong impetus for going with this one brand for as much as possible. It’s powerful software, fairly consistent across functions, and doesn’t seem to interfere with anything else.

Physically the mouse is nicely sculpted and felt good in my hand. The click pressure was light so it was easy to select things with great precision down to pixel level. The scroll wheel moved smoothly with only a gentle recurring indent. On my normal aluminium gaming mousepad it moved very smoothly. On my glass-covered desk it worked just as well as on the mousepad, unlike many optical mice.

And never, not even once, was there the slightest hesitation in response, whether in wireless or wired mode. I’d come to my computer after an hour away and touch the mouse and the pointer would move.

The mouse weighs 107 grams normally, but for those who like something a little heavier, it comes with 10 gram metal ballast weight that slots into a magnetically secured compartment on the bottom.

According to the Logitech Gaming Software app, at its most economical settings the rechargeable battery will last 37 hours. Putting on the lighting reduces that significantly, to as low as 23 hours. That’s with both the logo and scroll wheel lights on. Having a higher report rate also reduces battery life by as much as four hours, depending on the other settings. Some 22 hours was the lowest estimate. The specifications actually say 24 hours with default lighting, and 32 hours with no lighting. I’d guess that the software knows better.

No, not at all. Depending, I suppose, on usage. I used the G703 on my desktop, which meant a fair bit of use much of the time, such as when preparing photos in Photoshop for this very site. But also lengthy periods where I’d by typing away. And even lengthier periods when I’d be nowhere near the computer. Clearly the mouse manages its connection and uses very little power when it’s not moving. I’d typically get four or five days out of it.

But if you’re in mouse-intensive game play, those hour ratings are probably more realistic.

None of that will matter if you’re using the mouse wired or with the wireless charging system.

There was only one quirk in operation that had me puzzled and googling for a solution. I found it very difficult to drag windows from one screen to another. It turns out that by default Windows puts a small barrier there, a hesitation. If you’re dragging slowly, you can stop there and the window will instantly occupy the relevant half of the current screen.

I hadn’t even known about this feature until I started using this mouse. It’s speed sensitive. Below a certain dragging speed, the pointer stops at the edge of the screen (remember, only when dragging windows). Above that speed, it skates right over.

I found that by concentrating my mind and dragging quickly and surely I could still drag a window from screen to screen. It was the “Report Rate” that was the culprit, if that’s what you want to call it. Remember, the Report Rate is the number of times per second that the mouse reports its position to the computer. The default is a 1000 times, which is what makes it so very, very responsive for gaming. But this seems to interact with that Windows function, making Windows think that you’re dragging slower than you are. You can set the report rate instead to 500, 250 or even 125 times per second.

For me, 250 was a good balance. But of course you can have one profile with a slow report rate for general computer use, and another with full 1000 hertz polling for gaming, and assign a button to switch between them.

And that’s one of the keys to the Logitech G703 gaming mouse: it’s so flexible, and so easily switchable between modes. It exhibits all the mousy goodness one could want.

However, while I’m neither here nor there about whether my mouse is wireless or wired, if you’re keen on being untethered, I’d recommend getting the PowerPlay pad as well.

Overall
Features
Value for money
Performance
Ease of Use
Design
Reader Rating8 Votes
Super customisable, fast, smooth
You’ll be flipping between wired and wireless unless you invest in the PowerPlay wireless charger/pad
4.8