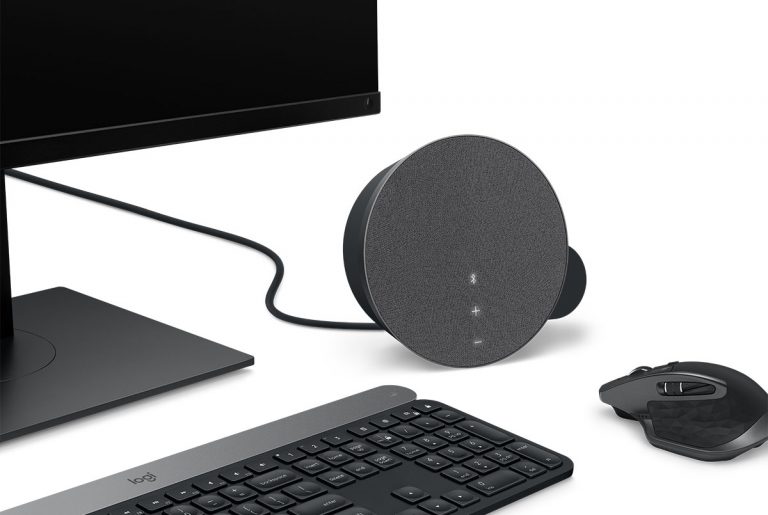 For many years I regarded “computer speakers” with derision. The whippersnappers amongst you readers may not realise it, but the now ubiquitous IBM-compatible personal computer (these days we call them Windows computers) originally didn’t come with audio capabilities, apart from a tiny speaker inside the box which made a few system sounds. Soon a market developed for add on sound cards, which SoundBlaster came to dominate. (And was eased back out of dominance when the audio came to be incorporated on the motherboard.)

And the speakers that went with them? Little beige colour rectangular boxes that sounded astonishingly tinny. If memory serves, I think even Logitech may have contributed some unremarkable models to the genre. But it was soon raising the game with decent sounding speakers, often with two small speakers and a subwoofer. The company’s “Z” range has continued in that tradition, even now.

The Logitech MX Sound Premium Bluetooth Speaker is somewhat of a departure from that though, adding versatility and delivering surprisingly good audio from a compact system. And it recognises that perhaps more than half computer systems now incorporate Bluetooth, and provides support for that feature.

I’m being unfair suggesting that the Logitech MX Sound speakers are “computer speakers”, even though Logitech is best known as a company for making fine computer peripherals such as a keyboards and mouses, and that’s likely the use to which most MX Sound systems will be put. In fact, Logitech says that it “Works with Bluetooth enabled devices and any device with a 3.5mm input” (I think it means “output”) and lists the following devices: Television, Computer, Smartphone, Tablet and Music player.

And that’s right. It actually has three inputs. Bluetooth, of course, and two separate 3.5mm sockets for analogue audio. They’re the ones you’ll use for plugging in TVs, computers and such. Two such devices at a time can be quite the convenience.

The left and right speakers are separate – also quite the departure from most compact Bluetooth speakers – so that you can get a respectable stereo spread. A quite respectable one, since the cable connecting the passive left speaker to the active right one is 1.8 metres in length.

Inside each unit is a speaker driver, of course, about which I know very little since Logitech  doesn’t specify their size. Logitech says that with their “high-end drivers … these speakers deliver balanced audio that accurately reproduces the sound artists intended”. I assume that they use single full range cones. Total power of 24 watts “peak” and 12 watts “RMS” is provided.

The enclosures appear to made of high impact plastic and each presents a grey circle some 159mm in diameter to the listener, canted back from the vertical by ten degrees. They are actually a little wider than that because a small extension on the side of each enclosure (to the right of the right speaker, left of the left speaker) houses a bass reflex port. The connections are on the back of the right speaker. A 3.5mm to 3.5mm analogue cable is included in the package, along with the small plug-pack power supply.

Controls? I’m glad you ask. It doesn’t look like the unit has any, but in fact there’s a proximity detector in the right hand speaker. If your hand gets within a couple of centimetres of it, three lights come on under the grille: “+”, “—” and the Bluetooth logo. You touch the first two adjust the volume, and touch and hold the latter to connect a Bluetooth device.

Finally, also on the back is a 3.5mm headphone connector.

Setting up the system was a matter of moments, largely occupied by clearing space from my desk. The cable lengths were generous so everything reached without problems. There didn’t appear to be any instructions provided with the unit, other than some infographics on the flaps of the carton. These, it turned out, were quite sufficient.

I plugged a source into one of the analogue audio input, got some music playing and was instantly rewarded with sound. As promised, simply putting my hand near the right speaker brought up the controls. The volume controls were responsive. If you are adjusting the level with no music sounding – and sometimes with the music playing – there’s a beep with each change of level, and a different toned beep when you max it out. That way, if no music is playing you’ll still know if you’ve overdone it. Each tap on the volume control adjusts the level by two decibels.

An interesting question with any audio device is: how do you select between inputs? Assuming that it has multiple inputs, which this one does. Remember: two 3.5mm analogue stereo sockets, plus Bluetooth. There was no obvious input selector. To find out how to switch I connected three sources and found that you don’t switch between inputs. Neither does the speaker.

Indeed, as I’m (very, very quickly) typing this sentence, the speakers are playing a total mash of sound, which consists of “Uptown Girl” by Billy Joel, playing from a Surface Pro 4, “Rock Lobster” by the B-52s, playing from an iPod Nano connected via analogue cable, and “Girlfriend” by Alicia Keys, playing from iPhone 8 connected by Bluetooth. Now, quick, to stop two of those. The noise!

Connect three devices, and it doesn’t switch between them. It just mixes all three signals together. You choose which to play by starting and stopping the source devices.

So, how did it sound? I did most of my listening with the MX speaker sitting on my desk, right in front of my usual computer speaker system (which costs more than ten times as much as the MX). Logitech has clearly engineered the sound for a reasonably well balanced sound. There’s no way that the MX could be accused of sounding “tinny”. There was adequate clarity and surprisingly little muddiness introduced by proximity to the desk. Perhaps the ten per cent tilt helped there. By comparison, I have my regular speakers on high quality isolating stands. Overall, the speakers had a restrained, clean sound with the upper midrange and treble back a little in the mix compared to the upper bass.

That ten per cent tilt did not point the speakers up high enough be directed towards my ears, which were some 900mm away from them. Since they do not apparently employ separate tweeters, it’s likely that high frequencies were being “beamed” on their axis. So I propped up the fronts of the speakers (a mid-thickness paperback novel for each did the trick) which raised that “beam” so that it was directed at me. That tightened up the sound and opened it up to a higher level of quality. I’d strongly recommend doing that (perhaps with something more sightly). Anything around 25mm thick should do the trick.

Logitech seems to have engineered the speakers for tight bass down to perhaps a hundred hertz or so. It was fast and delivered impressive kick, if not great depth. There’s no provision for the addition of a subwoofer, so you’ll have to take the bass as it is. I quite liked it.

To be clear, I wouldn’t consider these speakers appropriate for professional audio work, such as mastering or sound mixing. But for everyday music playback and general computer audio, they did a fine job. There are many TVs that would also benefit by having the Logitech MX system wired in to replace their internal speakers.

I found that tight, dynamic music could be delivered surprisingly loudly while remaining clean, with distortion below significant levels. Using the track “Heart of Sunrise” from Yes’ album Fragile, they could peak at 100dB and average around 90dB. I measured the bass response both front and back (near the port). At the front, the output started dropping rapidly at 105 hertz. The bass reflex port seemed to be tuned to achieve maximum effect around 100 hertz, with its output rapidly falling away below 80 hertz. The net result, tight clean upper bass and a hint of mid-bass.

My usual headphones – RRP nearly $600 – sounded good fed by the Logitech system, with tight and controlled bass and balanced treble. There was plenty of power to drive them to ridiculous levels – way more than the computer itself was able to provide – and a total absence of noise produced by the amplifier itself.

The Logitech MX Sound Premium Bluetooth Speakers are a reasonably priced, fine sounding and convenient set of speakers for computers, and other tasks where a compact sound improvement system is needed.