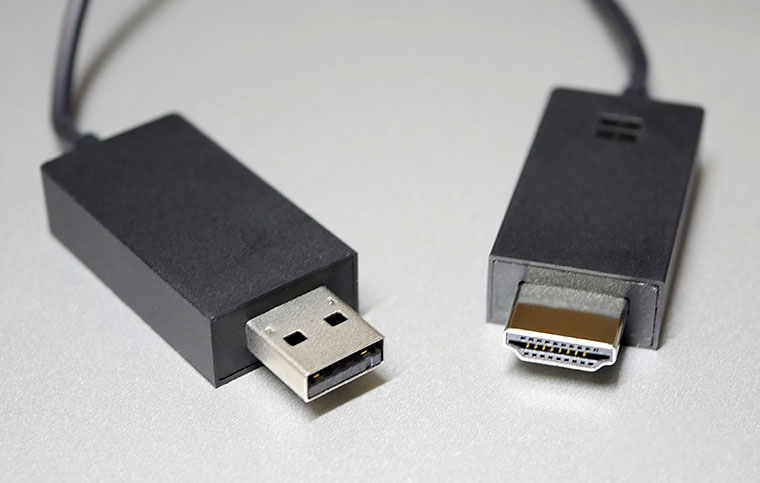 Miracast? WiDi? It’s all one and the same now, and it’s the Windows and Android answer to Apple TV. You can mirror your display and more to a suitable receiver. And what might a suitable receiver be? How about the Microsoft Wireless Display Adaptor v2.

At $99.95 for the Microsoft Wireless Display Adaptor, you might ask, why not go for the much cheaper Chromecast device? Chromecast tends to work best with particular Chromecast enabled apps. You can set your Android phone to mirror as well, but most of what you’ll get from a Windows computer is selected tabs from the Chrome Browser (if that’s what you’re using) and YouTube videos. With Miracast/WiDi, you can mirror everything on your device to TV or display.

You will need Windows 8.1 or Windows 10 for your computer. Intel used to provide a WiDi app for Windows 8 (and I think it worked with Window 7 as well), but now they’ve dropped it.

Both Miracast and WiDi had a lot in common. They used WiFi Direct – the means by which to devices can connect directly to each other via WiFi, rather than through your WiFi router. Miracast was for Android (and sometimes other devices). WiDi was for Windows and came first. But it was tied to particular Intel network chipsets and so could be problematic. Intel added Miracast support to WiDi in 2012, presumably seeing the silliness of having competing standards. Window 8.1 had Miracast support built in (as does Windows 10) and this time last year Intel discontinued WiDi completely.

To some extent Miracast is a wireless replacement for a HDMI cable. It is built into a lot of devices: many smart TVs, for example, and some smart Blu-ray players. So why would you want a separate device for it?

Two reasons I’d suggest: portability and ease of use.

Portability? What if you don’t have a smart TV, or you’re visiting your great Aunt who doesn’t have a smart TV. All you need on her TV is a spare HDMI input and a USB socket for power. At a pinch you can use your iPhone charger for the latter. It needn’t be a TV, by the way. It could equally be a spare HDMI-equipped computer monitor.

Ease of use? In order to use Miracast on many smart TVs need you to navigate via the home screen to an option to switch it on. With a standalone receiver, you just switch to the input it’s plugged into.

Note: the name Miracast is often not used. It might be “AllShare” (which used to be the name Samsung used, but now its phones just say “Quick Connect”). Or something else.

So, back to the Microsoft Wireless Display Adapter. It’s simply a 30cm cable with a USB plug on one end and a HDMI plug on the other. The necessary electronics are packed into one or both of the casings for the plugs. In a nice touch, a short plastic receptacle is provided which allows the plugs to be inserted in either end, keeping things neat for travelling. There’s also an extension cable.

I see that Microsoft still has the first version available at its store as well. This one has a longer body on the HDMI end and a shorter one on the USB end.

I was puzzling over the point of the extension cable. It adds a little less than 15cm to the overall length. It may rescue the user on occasion, but making it thirty or forty centimetres would probably mean rescuing the user in just about all circumstances. And then I realised that perhaps it wasn’t about length but width. Both the HDMI and USB plugs have fairly chunky surrounds. Stylistically, they are in keeping with Microsoft’s hardware products (the Surface Pro Dock, for example), but at perhaps 21.5mm wide and 11mm thick, they may not fit into some sockets, particularly if they’re close spaced or inset. The plastic surround of the USB plug on the extension is less than 15mm wide and 8mm thick, so it should fit into tighter environments (the USB socket on the same cable matches the size of the main USB plug).

As delivered, the Adaptor had firmware V.2.0.8350 installed. You might wonder how you can update the firmware on something with no obvious controls. It turns out that in the Microsoft Store (the one for Windows apps) you can download the Microsoft Wireless Display Adaptor App. This is a Windows only app. I couldn’t find a version in the Android Play Store. So you can use the Adaptor with Android, but to update or control it, you need Windows (Windows phone will apparently do).

Anyway, I installed the app on the Microsoft Surface 4, connected to the adaptor and fired up the app. It told me that there was a new firmware available: V.2.0.8365. The firmware update was around 19MB. Once downloaded you hit “Update” to send the firmware to the adaptor. That only took a couple of minutes, during which time it rebooted.

The app also lets you change the adaptor name, set a PIN code required before connecting to the adaptor, and a password to protect changes being made using the app. The name change I applied didn’t take until I hit the “restart” button to make the adaptor reboot itself.

My Microsoft Surface Pro 4 connected perfectly and dazzlingly quickly on every occasion, delivering a fine 1080p rendition of the screen. The default was to duplicate the main screen image – in other words, to mirror it. Note: 1080p is the highest resolution supported, even when I plugged it into 4K TVs.

But it is like a HDMI cable, because I could choose “Project” in Windows and set the mode to “Extend”, thereby using the TV as a second screen. Latency – the delay between me doing something and it appearing on screen – was quite low. It made fast mouse selection work difficult, but that was about the only drawback. That was using a TV with a little latency itself. Some TVs will be much slower since they can impose a delay of 100 milliseconds (ie. a tenth of a second) or more.

No problems there, so I dragged out my old Toshiba Satellite Z930 ultrabook which I purchased in early 2013, and on which I’d recently performed a clean install of Windows 10 (it came with Windows 8). This computer had always been problematic with WiDi and Miracast. Once when I was attempting to test a Miracast receiver, an engineer in Taiwan spent several hours remotely controlling the Toshiba, trying to make it work. He failed.

Yet the Toshiba connected instantly and reliably to the Microsoft Wireless Display Adaptor. The notebook’s WiFi is limited to the 2.4GHz band, so it was interesting to see that it took a touch longer for the mirrored display to be properly rendered. When it first appeared, rather than flashing up complete, it would for an instant appear in a semi-complete fashion with a kind of bubbly distortion before being finished, at which point it looked fine.

It also worked well with my Samsung Galaxy S6 phone, after a couple of hiccoughs. At first it would connect cleanly and quickly. But then, after I’d disconnected it, the phone would fail to connect again. But after half an hour it got over that and allowed me to reconnect without further problems.

With phones, it auto flips aspect ratio if possible. So normally your Android phone screen will be showing as a narrow column in the centre of the TV screen, but if you play a photo or video that’s wider than tall, it pretends the phone has been tipped to the side so the image or video fills the screen.

For Apple you have Apple TV for screen mirroring, along with other things. For Windows and Android you have Miracast. And the Microsoft Wireless Display Adaptor v2 seems to be very reliable, convenient and compact way to make that happen.