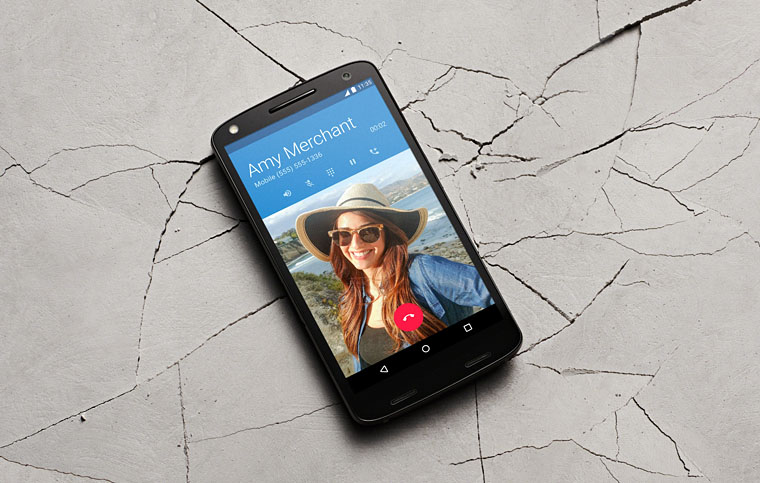 How many people do you know with a nasty crack in the screen of their phone? Motorola’s big push on the Moto X Force mobile phone is that it’s immune to such concerns. It doesn’t mince words on the matter, saying the Moto X Force features “Moto ShatterShield the world’s first shatterproof smartphone display, so it won’t let you down even when it falls!”

I’m going to talk about other features and its performance as well, but I suspect some readers are thinking: “you had me at shatterproof”!

Now I don’t believe anything glass can be shatterproof (unless it bends instead, but let’s not go there). So let’s say the proverbial grand piano falls out of a second floor window onto your phone and ShatterShield’s abilities are exceeded. What happens then?

Why, you just make a warranty claim. As Motorola says, “The display and embedded lens are warranted against shattering and cracking for four (4) years from the original date of purchase”. So either your screen doesn’t crack, or it does and gets replaced for free. Sounds good to me. But do note: “scratches or other damage to the protective lens is not covered by this warranty”. Furthermore, the “phone is not shockproof or designed to withstand all damage from dropping”.

Got all that? When the grand piano falls, you might get a new screen, but if the Qualcomm Snapdragon 2GHz Octa-core CPU or its 3GB of RAM get ground into dust, or the motherboard to which they’re attached fails, then tough.

Still, it’s rare for a dropped phone to break anywhere other than on the screen. So just continue to treat the phone with respect and all should be fine.

So, the other stuff. This is a large Android phone running 6.0.1 and I must say I was surprised by the range of advanced features in a mid-priced ($599) phone. Cutting to the chase: the only obvious omission is fingerprint unlocking.

What you do get is a large 5.4 inch screen in high resolution QuadHD (1440 by 2560 pixels), delivered using AMOLED technology.

I’ve mentioned the processor. There’s also Adreno 430 graphics processing. The phone has 32GB of storage built in, and provision for a microSD card with up to two terabytes more storage to be added. I loaded it up with a 128GB card. It’s nice not to worry about how much music you can fit in, or how many photos or how much video you can shoot.

That’s especially the case since the camera can shoot up to 21 megapixel shots, although it also has a wider 16 megapixel mode. Likewise it can shoot 1080p and UltraHD (aka 4K) at 30 frames per second. That stuff chews through memory.

The camera has a maximum f/2.0 aperture, phase detect auto focus, High Dynamic Range shooting, burst mode and a panorama function. Not RAW though. The twin-LED flash has something called “Colour Correlated Temperature”, which is designed to give more natural lighting than is usual for flashes.

The selfie camera is a five megapixel unit with a wide angle lens and a display flash – that is, the screen shines on you when needed.

There’s an oversized battery storing 3760mAh which Motorola says is good for 48 hours of mixed usage (your and my mileage may, indeed certainly will, vary). You can charge the phone wirelessly (QI and PMA both work). The quick charger can add eight hours worth of charge in fifteen minutes when the battery’s mostly discharged. The battery cannot be removed.

Connectivity is via WiFi, dual band, up to 802.11ac with MIMO. Plugging in is via the usual fiddly Micro-B USB. This supports OTG – On The Go – connections, so you can plug in additional memory, or a real keyboard if you’re sitting in your lonely hotel room trying to write long emails. Don’t knock it! We typers are far more efficient with real keys under finger. The OTG connection also supports additional memory and external audio devices, such as digital to analogue converters for higher quality sound. (I checked, it does.) It also features NFC which is convenient for pairing and so on.

The back of the phone is made of something called “ballistic nylon”. It’s black and has a kind of weave texture which is pleasant to touch and provides for a secure grip.

I used this phone for over a week and found it quite a pleasure to use. It is 9.2mm at its thickest, but the rear is curved so it’s 7.6mm at the edges. That makes it a comfy fit when popped into a pocket, screen side in. All three hardware buttons – power and volume up and down – are on the right side. The headphone socket is on the top. I know it’s silly, but to me having it on the top means that the phone can be the right way up in your pocket while you’re using headphones, which means that the world’s natural geometry seems in order. As I said, silly.

The three main operation buttons are soft, set out across the bottom of the display.

The Moto version of Android goes for simplified icons. The normal quick access bar which you normally produce by swiping down from the top requires a second swipe, with only notifications shown on the first swipe. There’s no option I could find to display battery percentage, but it is shown on the second swipe. I prefer to see it at a glance.

Likewise, I couldn’t find a Sound/Vibrate/Silent option to cycle through. You have to choose “Do Not Disturb” instead which kind of works.

When you first start it up and restore your Google setup, all the apps end up in an apps folder ready to be dragged out onto the screens in the order that you like. Restoring everything worked well, aside from the usual pain of having to log onto everything again. My standard setup includes using OneDrive for syncing certain working files and for automatically backing up photos and videos, and this worked reliably.

The computing-style performance of the phone was first class. Everything ran very quickly and movement of graphics on the screen was perfectly smooth. That last in itself is pretty impressive because the size, resolution and brightness of the display would make it very easy to see delays in frame refreshes or any other stuttering.

The screen display is gorgeous, with a very similar colour balance and effective contrast and brightness as my regular Samsung Galaxy S6, but that slightly larger display size tipped the balance in favour of the Motorola. When you pick up the phone, it displays notifications and the time on the black background – something more easily achieved at low power usage than with LCD displays.

Despite the big battery, the life of the Moto X Force seemed similar to the Samsung’s. With heavy use it won’t last a full day. With my regular use, including a fair bit of photo taking, it’d be down to 50% when I went to bed. So, nothing remarkable either way on that front.

The camera was rather good, if quite different in the way you operate it. It has relatively few adjustable features, but the main features it has going is a panorama mode, automatic or manual HDR, a timer, and the ability to set the picture format to normal with 21 megapixels, or 16:9 at 16.1 megapixels. Operation is a bit unusual. There is no shutter button. You just touch the screen anywhere and a photo will be taken. For a bit more control you can drag a kind of target symbol to where you want focus and exposure sensing to be assessed, and there you can lock it in or tweak the exposure.

The picture quality was almost as good as that of the Samsung Galaxy S6 in normal conditions. I’m ambivalent about its low light performance. It stretched the contrast nicely, giving a deeper, richer picture when viewed on the phones screen. But viewed more closely it seemed to apply a bit too much noise reduction, and that actually reduced the clarity of detail.

I could not work out how to get rid of the target symbol once I’d invoked it, so I couldn’t get it back to full automatic mode. And I found that burst mode very frustrating! I so wished I could switch it off. I went to inspect the four or five pictures I took out of the window of a plane, and found a series of sixty odd pictures of where the seat is bolted to the floor. Apparently I’d held the phone in the wrong place. You can start the camera app – even when the phone is asleep – by giving it a quick double twist at your wrist. When I went to take a photo, I found five had already been taken because I’d been touching the screen.

Not too important, I suppose, except that then they’d start syncing with OneDrive, bogging down my data connection.

Practice makes perfect. Over time I’d learn, I expect, to handle the phone without causing unintentional bursts. The fact is, if you want an excellent screen, very good overall performance, a good quality camera, expandable memory and only have $599 to hand, the Moto X Force will deliver it. Oh, along with an screen that won’t shatter or crack (or be freely replaced if it does).