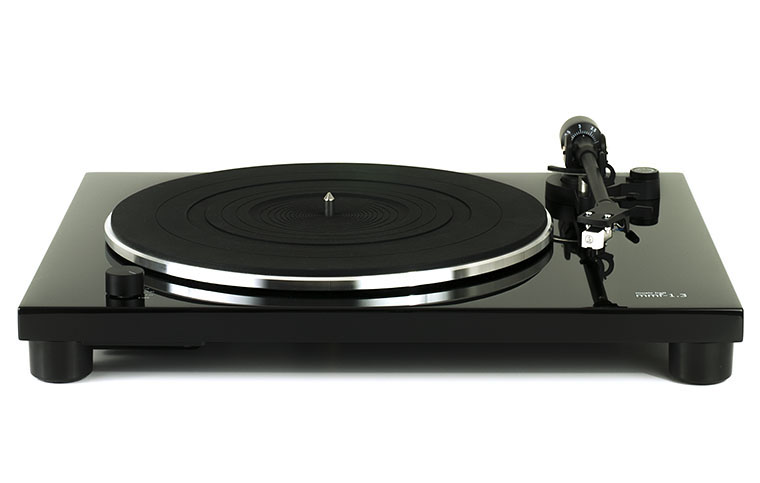 Want to get back into vinyl? Or start for the first time? There are a number of quite significant challenges in doing that, and your choice of turntable can help you overcome some of them. It’s with this that the Music Hall MMF-1.3 turntable excels.

The first challenge is equipment: you need more than just a turntable. A standard high fidelity turntable won’t work with most audio equipment made in the last couple of decades. Their output levels are exceptionally low, and furthermore the signal needs massive amounts of correction to sound right – the so-called RIAA equalisation. Thirty years ago respectable audio gear routinely had “phono” inputs that catered for this, but after the CD gained dominance, these were dropped.

Nowadays with the re-popularising of vinyl, some gear includes a phono pre-amp. But if your system doesn’t, the Music Hall MMF-1.3 can help because it has two output modes, from which you select using a switch on the back. The “Phono” mode is for those special inputs while the “Line” mode runs the signal through a built-in phono preamplifier and so can be used with any audio system with a regular analogue input, including active loudspeakers.

Which raises the question: what’s the point of retaining the phono mode? In the world of audio gear, perhaps the most critical amplifier component is the phono pre-amp. Enthusiasts can be very particular about them and may have preferred models. So having the phono level output provides for all kinds of listeners.

The turntable has a solid, weighty plinth (that’s the body) on four soft feet. A perspex lid keeps out the dust (and reduces any acoustic feedback). The aluminium platter is belt driven.

The tone arm has a removable headshell for the cartridge. The cartridge is pre-attached to the headshell, so there’s no need for things like alignment protractors. Tracking weight is set using a conventional counter weight and there’s a dial-it-in anti-skating mechanism. The arm is fully manual, of course, as any additional mechanisms could interfere with its free movement. That means, for those unfamiliar with these things, that you have to raise the arm when the record finishes playing. The arm lift is damped and lowers the arm at a good speed, gently, but not so slowly as to make one impatient.

The recommended tracking force for the included Audio Technica AT3600L cartridge is a rather high three grams. I come from the days when the preference was for one gram, or even less for certain very expensive cartridge models. These days two grams is closer to the norm. You’d expect a cartridge with a fifty per cent higher tracking force to impose more wear on the grooves.

But if you’re building a collection from second hand records, this high tracking can be a boon, providing greater stability with old and worn records. If you’re planning on building a collection of new and pristine recordings, then I’d suggest considering replacing the supplied cartridge with a higher quality one.

(Note: never use a lower stylus pressure/tracking force than specified for the cartridge and stylus. That’s more likely to increase rather than reduce wear because it will leave the stylus rattling around uncertainly in the groove, particularly in high modulation sections of the track.)

One highly unusual feature is the inclusion of a 78rpm speed (in addition to the 33 1/3 speed for LPs, and 45rpm for singles). That’s what was used for several decades back in olden days (where the material was more likely to be shellac rather than vinyl). You can see those records in antique shops. They’re usually ten inches in diameter instead of twelve, and are thicker and less flexible, and have a maximum playing time of three minutes per side. (And now you know how the tradition of the three minute pop song was established.)

Plus their labels are yellowed by time. The last 78 made in the US was released 58 years ago, and world wide production had completely ceased by 47 years ago. Unlike vinyl, 78s never made a comeback.

There are thousands of hours of treasures on those old records but the 78 speed available on this turntable is alone not enough to play 78s. You also need the appropriate stylus. When the 33 1/3 rpm records were introduced, they also introduced something called “microgroove”. As the name suggests, the grooves holding the music were much thinner than those which had been used in the old format. A typical modern elliptical cartridge has a stylus some 18 micrometres wide. Something closer to 65 is needed for 78s.

The use of a removable head on this turntable to hold the cartridge raised the intriguing possibility of playing actual 78rpm records. The manufacturer tells me that replacement headshells are not  yet available due to supply constraints, but when they are you could purchase one and switch simply to a 78rpm cartridge (something like the Ortofon 2M 78 – 115 Euro) when you want to play 78s.

Changing headshells is easy: place and twist the sleeve.

From those who value vinyl above all other forms of music reproduction we sometimes hear that one of its joys is the sheer tactile pleasure of managing the records, of having to carefully place the stylus into the groove, of caring for the records themselves. With this turntable (and, indeed, most others) that special pleasure starts from the moment you open the box, because it comes in parts. The plinth has the feet, motor and tone arm attached, along with the centre spindle. Separate is the aluminium platter. Separate again is the heavy rubber mat for the platter. As is the perspex lid. And the counterweight for the tone arm. And the removable head with the cartridge. And the hinges for the lid. And of course the power supply.

I’m feeling daunted, right now as I’m listening, about the prospect of packing all this up and finding the right places for them to go in the box so the turntable can back to the distributor.

Anyway, all you need do for assembly is to follow the instructions methodically. One nice touch: the turntable belt is already on the underside of the platter and a short length of red ribbon is threaded under it, allowing you to lift it up without sharp instruments or greasy fingers to place it over the motor pulley. But do be a bit more careful than I was. Once I started it up the first time, there was a repetitive brushing sound. Investigation revealed I’d managed to twist the belt. Once I’d put it aright, all was quiet.

It was clear that the engineering of this turntable was such that I wouldn’t hesitate to consider upgrading the cartridge to something with lower tracking weight, just to provide better care for my records. But my records, old though most of them are, have been maintained in very good condition. If you’re starting a collection with second hand records, sticking with the standard cartridge might be best.

As to performance, I mostly listened using the built-in pre-amp and the line outputs. It worked fine with the phono level output, but I figure most purchasers will use the inbuilt facility.

It did precisely what it ought to. There was no discernible wow and flutter (slow and fast speed variations) and noise was about as one would expect: very high compared to modern digital sources. But it was pretty much all due to the surface noise of the LPs themselves. There was no audible noise from the turntable itself. I could detect no transmission of motor or bearing vibrations coming through the speakers, nor any rumble even though I was using a subwoofer.

There was plenty of bite, a good attack on musical transients, but no undue emphasis on the treble.

I took the opportunity to listen to a number of old albums I haven’t played for years. The 1981 synthesizer album Audion from Synergy delivered plenty of powerful bass, cleanly and nicely extended. I’d forgotten about Ultravox for years, but my eye fell upon Vienna while flipping through my record collection, and the album turned out to be in good nick. The rhythm and power on “New Europeans” delivered via this turntable gave me a new appreciation of an album of which I’d previously been dismissive.

The turntable had no trouble coping with Glenn Gould’s piano doing Liszt doing Beethoven’s Fifth Symphony, and did an equally good job with the acoustic elements of Laura Marling’s recent Short Movie album.

As far as I’m concerned the Music Hall MMF-13 turntable is an ideal unit for anyone wanting to get back into vinyl, or is just starting out and expects to be collecting plenty of second-hand discs. And especially for anyone who wants to get into 78rpm records.