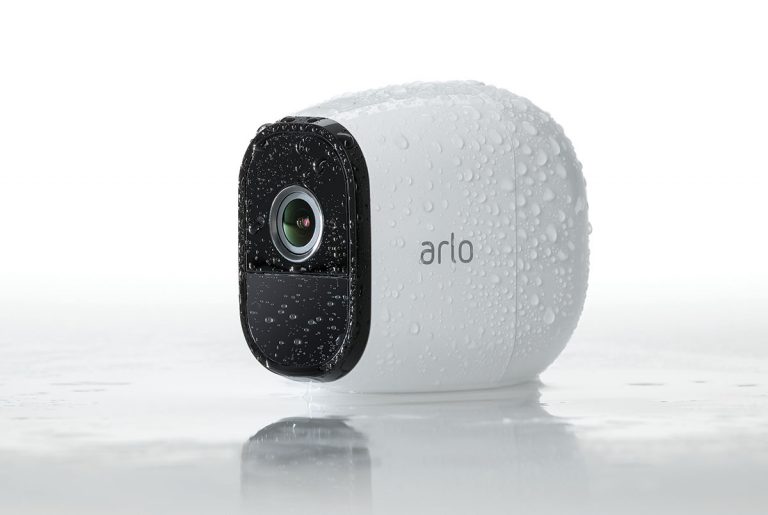 Netgear’s Arlo Pro Smart Security System is an out of the box, do it yourself, true wireless home security system. “True” wireless? Indeed. Not only do the cameras communicate wirelessly, they run on rechargeable batteries.

The essence of the system is a base station connected to your network (by cable), and one more more cameras connected wirelessly to the base station. The cameras record automatically when motion is detected, or can be triggered to record or take photographs remotely. They don’t record to memory card. They record to the cloud. (Which is to say, remote storage maintained by Netgear.)

You can also monitor remotely. You can hear what the cameras hear. You can talk through the speaker in the cameras. And you can remotely have the base station scream out a nasty, ear-piercing siren if you wish.

The prices depend on how many cameras you want. The basic kit comes with the base station and a single camera ($499). The review unit with two cameras is $799. Then there are three and four camera versions ($1099 and $1399). You can add single cameras ($349 each) to an existing system.

The basic cloud service is free. This supports the use of up to five cameras, one gigabyte of storage and seven days retention of recordings. You can upgrade the Premier level (30 days, ten gigabytes, ten cameras) for a $129 per year subscription, or to Elite (60 days, 100GB, 14 cameras) for $189 annually.

As you can see from the pictures herewith, the cameras are neat little things, not at all intimidating in appearance. Mounting them is very easy because each has a hemispherical depression in the back with a strong magnet around it. With each camera is supplied a 55mm wide plate with a matching half-sphere on it. The plate is easily mountable to a wall, and the camera then just snaps on, held in place magnetically. They can be pointed in just about any direction from that mount.

There are limits to battery life, of course. Each camera has a Micro-B USB port on the back under a rubber cover which keeps out the water. You can power each continuously using a standard USB adaptor – one is provided along with a two metre USB cable. There are also two USB connectors on the base station, so one of those could be used if a camera is nearby.

The camera resolution is 1280 by 720 pixels and they work in colour, but they also have infrared LEDs so they can work in the dark – and the presented picture then is of course in black and white. The IR is rated to work at up to eight metres. The camera have a field of view of 130 degrees and have a fixed focus which covers from 60cm to infinity.

As far as I could work out, even though WiFi conventions are used (2.4GHz, 802.11n), the wireless connection between the cameras and the bases station does not use the home network. Apart from anything else, there is no logging on. Instead they talk only to the base station. The range is specified as “300+ feet line of sight”. There is no provision for making a wired connection to the cameras.

Each camera only weighs 136 grams, and is 80mm long. They are rated to work from a temperature of -20 to 45 degrees Celsius.

There is a very wide range of accessories, including skins and hoods for the camera, a solar panel for charging, spare batteries and a charging station.

Setting up was straight forward and hassle free. The base station must be plugged in to the router. It only takes a couple of minutes to fire up properly. The cameras are not pre-paired – “synced” is the terminology the system uses. You have to do that yourself, one by one. But that also is easy. Press a button on the base station for a couple of seconds, then a button on one of the cameras. When that’s completed, after a minute or so, do the next one.

The cameras come out of the box pre-charged, so you can do that first thing before putting them into place.

The you install the Arlo app. I used the Android version, although I gather the iOS version is the same. Once started, the app connects to the base station and tells you its status. Which, as it turned out, was that both it and the two cameras needed firmware updates. Applying those was just a matter of tapping relevant button in the app and waiting. The various devices had complicated names with letters and numbers, but you can rename them through the app to something easily understandable.

The first thing I simply had to do – I couldn’t resist the urge – was to give the siren a go. Even though there was a warning and a claim of 100dB of loudness. They weren’t kidding It is a nasty piece of work, which is precisely what it ought to be. I was stabbing the button to switch it off instantly. Any intruders near to the base station are going to get a well-deserved start, and it’s loud enough so that if it goes off inside a house, anyone nearby will hear it well enough to know that an alarm has been tripped.

The range is also going to depend on your local conditions. For what it’s worth, I put the base station on the desk in my office in a standalone building at the back of my home – it has foil insulation, which reduces the range of radio signals – and the camera still worked when at the front of the house, some twenty metres away, with almost all the house in the signal path. A few metres in front of the house, it would no longer work.

It seems likely that no matter where you are – even if, as I am right now – sitting thirty centimetres away from the base station, when you access a camera feed using the app, you’re getting it from the cloud. That is, the video feed is digitised, sent to the cloud, and then sent back to you. That makes for a quite a delay. I typically measured values in the 15 to 20 second range. You’re not going to see what’s happening at home quite in real time.

The automatically triggered video recordings were ten seconds in length.

None of the video was in super high quality. The automatic and manually triggered video recordings used a screen resolution of 640 by 352 pixels. You can adjust the balance between “battery life” and video quality – the default setting, and the one I used, was about half way between the extremes. While it no doubt impacts on battery life, higher resolution is also difficult for reasons of communications speed. My home upload speed tops out at under 0.8Mbps on a good day. That’s not really suitable for high resolution video feeds.

Even though you can hear the noises from the cameras when they’re selected to feed video, and even though you can talk back through the camera, it’s no good for two way conversations. Too much lag on the camera-to-you end of communications, along with a much shorter lag the other way.

I put one of the cameras in my equipment cupboard to see how it went in total darkness. It went perfectly well, its LEDs thoroughly illuminating the cupboard with invisible IR so that it was able to capture a usable image.

Battery life? Netgear doesn’t give a specification, correctly pointing out that it all depends on a host of factors, including how often video recording is triggered, how far away the cameras are from the base station and so on. For what it’s worth, both cameras are sitting on 97% charge according to the app, and that’s after about seven hours of use. Power management seems to be very effective. Remember, video isn’t feeding the whole time, just when you tell the app to connect, or when the motion sensor triggers it.

Despite this, in permanent installations you are going to want to provide permanent power.

Is the battery functionality a waste then? No. You might want to place the cameras temporarily for some event. Also, it’s great when you want to work out where to put the camera. There’s even a low latency camera position setup section of the app which shows you what the camera is seeing with a significantly reduced delay so that you can try different angles and positions relatively easily.

The Netgear Arlo Pro Wireless Security Camera System is a clever, neat and easy to set up solution to one’s home security needs. And the good thing is, you can monitor remotely from anywhere in the world, so long as you have an Internet connection.

Arlo Go 2 4G is a mobile security camera for anywhere

Arlo Pro 4 camera kits cash back in November and December