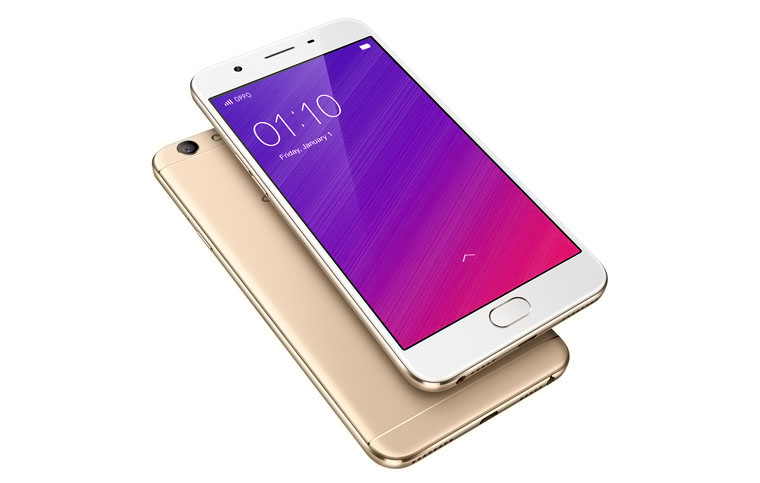 It was only six months ago that we featured a review of the mid-priced Oppo F1 smart phone. Now there’s a new version, the Oppo F1s. Looks like it’s taking a leaf from Apple’s book of naming conventions. There are a number of quite significant changes that come with the addition of that little “s”.

The first change is the price increase: up from $299 to $348 for outright purchase. Does that make it poor value for money? I don’t think so. There was a fair bit of eye-widening going on when I held it up to iPhone-toting friends and relatives and announced the price.

Another change is the processor. Gone is the Qualcomm Snapdragon 616 CPU, replaced by the MediaTek MT6750, an eight x 1.5GHz processor that on paper should offer about 25% greater speed. There is 3GB of RAM installed. Also improved: 32GB of storage built in, up from 16GB. Add to that the microSD card slot with support for up to 128GB cards, and you’ve got a lot of space for photos, video and music.

In Australia we are getting the variant with support for a single Nano SIM, not dual SIMs.

The screen remains the same resolution: 720 by 1280 pixels for its 5.5 inches. That comes to 267dpi, which is more than adequate under most circumstances, but a long way short of the eye dazzling 500-ish dpis of premium phones. The screen is made of Corning Gorilla Glass 4 with the 2.5D rating, which means that the edges are rounded off. Youtube videos feature people scraping away at this phone’s surface with assorted tools and tapping quite firmly with small hammers without leaving any marks.

The phone comes with a transparent plastic, or perhaps silicon, case so the non-glass sides can be protected without extra cost.

And here’s a premium feature: a fingerprint scanner in the home button so you don’t need to enter a pin to unlock.

For a long time I’ve been ambivalent about fingerprint scanners. The one on my Samsung Galaxy S6 Edge up and died a few of weeks after purchase. The one in my Samsung Galaxy S6 works first time about two thirds of the time. This phone might make me a convert: it worked instantly (Oppo says two tenths of a second) at least 98% of the time by my estimation. Fast and reliable.

The sides and rear of the phone are really quite attractively finished in soft, gold-tinted anodised aluminium. It’s only 7.4mm thick and weighs 160 grams. The Oppo F1s looks very much like an expensive phone.

Of course it runs a form of Android, Oppo’s ColorOS now up to version 3.0. This is based on Android 5.1 Lollipop, but with its own slight variations.

It can be confusing because of those differences, and because there isn’t the wealth of “how do I do it” material on the Web, at least by comparison with the big name phone brands. Nor is the manual of much use. It says on one of its two English-language pages: “This guide will show you how to use the phone and its important functions”, but only shows a diagram of the phone and some specification information. There was no manual I could find on the Web.

So when I wanted to install a widget on the main screen to show my data usage, I was lost. The usual press-and-hold on a blank area didn’t work. None of the information on Youtube videos and help websites worked. I even asked on a mailing list of experienced tech journos to no avail. And then I discovered in the “Settings” an “Instructions” section which had fifteen slides showing how to do various things, including adding widgets. Hah! (For the record, you pinch on the home screen with thumb and forefinger to bring up the widget editor.)

There were some other somewhat different things. The notifications appear in the usual way when you drag down from the top of the screen, but there’s no quick settings bar. A side swipe brings up a panel of a dozen quick launch icons which do not appear to be editable. There’s no mobile hotspot icon, for example. Since I use that function on a regular basis (and it works well with this phone), it was a pain having to navigate to the Settings then Additional Settings menu, followed by a scroll down, each time.

Likewise, there’s apparently no way of resizing the apps grid or icons, so it’s four across whether you like it or not.

Oppo has put a lot of emphasis on photos with this phone, especially selfies. In fact, the front facing camera is higher spec than the rear one. For photographing yourself you get 16 megapixels and an f/2.0 aperture. For shooting the rest of the world you get 13 megapixels and f/2.2. Both camera will work at 720p and 1080p for video.

For both, there’s a rather good camera app called, not surprisingly, “Camera”. Why good? Well, it does the usual respectable job in “Normal” mode, but it also offers a bunch of other modes. There’s an auto Panorama mode, for example, which takes the second and third photos automatically as you swing the camera and stitches them together. There’s a beautification setting for those selfies (front camera only) that can brush away some of the imperfections in one’s visage. (I shall spare the reader the inexplicably poor results the process managed in applying it to my own face.) There’s an UltraHD mode which takes a few photos and meshes them together, and a double exposure mode for your trick in-camera photography.

And an Expert mode (rear camera only), in which you can adjust shutter speed, white balance, ISO, focus and offset exposure. Plus a “RAW” mode, which captures the output of the camera module at full resolution without any processing by the image engine.

In “Normal” mode the results were decent, with a fairly fast and reliable autofocus, along with the ready ability to choose the sample point for focus and exposure. Quality dropped off rapidly with zoom. The image engine tended to be fairly light, steering clear of excessive edge sharpening and the like. For normal use in good light the results were impressive. In lower light things deteriorated, with focus harder to achieve.

I had quite a bit of trouble with Expert mode. I left all its settings on Auto, but used it so I could grab the “RAW” pictures. The autofocus seemed a lot more hit and miss, and selecting points on the screen to concentrate on was less reliable. Photos I thought were clear turned out to be quite soft when I brought them onto my computer. Comparing the “RAW” with the standard “JPG” shots (it takes both in “RAW” mode) showed that the processing is fairly light, mostly colour caste corrections and a little noise reduction.

Remember when you used a phone to make phone calls? Turns out the Oppo F1s can do this too. All kidding aside, its signal strength indicator showed more bars when I was sitting at the reception dead spot that is my desk than is usual for phones. When I disconnected WiFi (802.11 b/g/n dual band supported) and ran the data connection speed test sitting in my dead spot, the phone managed a 10.6Mbps download speed and 1.5Mbps upload. Wandering around at various times of day in the area, that was close to worst case. The best was nearly 93Mbps download and 5.7Mbps upload. On another occasion it managed “only” 25.1Mbps download, but 32Mbps upload!

All those figures will depend on location and current network demands. The important thing to know is that the phone can run at NBN speeds if network resources are available. All the usual stuff worked fine, whether connected via WiFi or network. Google maps downloaded satellite imagery quickly enough to be satisfying in use.

In practice? There were no lags in anything. The interface was snappy. The video tests during the benchmark showed smooth scrolling and vector graphics generation. With a relatively modest screen resolution, the Adreno 405 graphics processor provided plenty of on-screen performance.

The phone supports On-the-Go connections via its Micro-B USB socket, although it makes it hard to use. It switches itself off after ten minutes of no use, and requires digging down into the Setup menu to switch it back on. When on, I could use OTG flash memory or an external audio DAC for high quality sound.

Finally, battery life. The phone packs a battery rated at slightly more than 3000mAh. Using it for a couple of weeks in the same way that I use my usual Samsung Galaxy S6, I’d say the battery lasts a good 50% longer. As always, life will vary according to myriad factors, many of which are out of your control such as network traffic conditions and distance from cell towers.

Well, I’m impressed. The Oppo F1s costs less than a third the price of the leading brand premium phones, looks a lot like one itself, and has respectable performance and features in most areas. It’s surely going to sell a lot of these.

* These figures are merely an index for comparison with between devices.