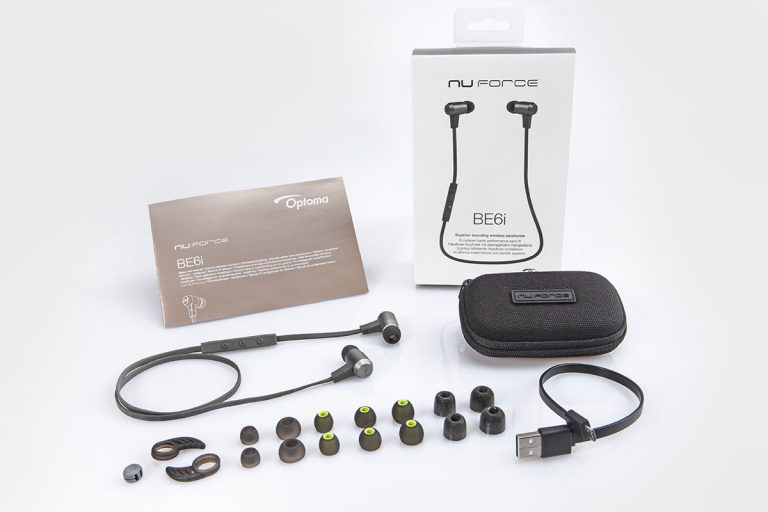 These look nice: the Optoma NuForce BE6i Bluetooth earphones have aluminium earpieces and two little sets of letters that ought to be the norm for all Bluetooth audio devices, but rarely are.

Those little sets of letters are AAC and aptX. Bluetooth has for years supported acceptable stereo music quality using the SBC codec, but AAC and aptX are higher bitrate, higher quality standards. AAC is typically used by Apple devices, while aptX appears on a lot of higher end Android phones.

Those are the two “sets of letters” that are far too rarely supported by headphones and earphones. The Optoma NuForce BE6i earphones, though, do indeed support them.

The ear pieces are made of aluminium. They are available in a darker metallic grey and a golden bronze colour. They are powered by an 80mAh battery. Charging is via a Micro-B USB socket on the control and microphone pod which is, itself, set towards the right hand ear piece on the connecting cable.

They come with no less than seven sets of soft tips for the ear pieces. There are three sizes of the regular ones, two sizes on ones designed to go with supplied wings which can sometimes provide greater security in one’s ears, and two made of memory foam which should provide excellent conformance to earhole shape. There’s also a charge cable and a zip pouch for holding the earphones.

The earphones are IPx5 certified, so they’re perfectly rain proof. And sweat proof. They offer an eight hour battery life. Their rated frequency response is 20 to 20,000 hertz. The drivers are 10mm units. In total they weigh 16 grams.

I do like clear indications of what’s going on with a device. When you hold down the multifunction button for three seconds on this one it switches on or off. When it comes on, there are four ascending notes. Off and there are four descending notes. When on, the blue LED flashes once every five seconds. If it’s not connected with a device, it’s a double flash every five seconds.

Hold down the button for six seconds and it goes into pairing mode, with a double beep and the LED flashing blue and red continually. All very intuitive, easy to use, and fine for keeping you informed.

That said, it did take me a little while to get use to the LED flashing blue every five seconds when in use. When walking the dog after dark – it is winter, after all, and the sun disappears early – I kept catching the reflected flash out of the corner of my eye. But, of course, I got used to it after a while.

Physically, the already-attached ear tips were a touch too small for me, making it difficult to achieve a good seal. A good seal is important both for making sure the ear pieces stay put, and also to ensure the delivery of good bass. I found the next size up sorted that out. Actually getting them on took quite the effort because the hole at the centre is rather small, requiring quite the literal stretch to get them over the metal mounts.

That made it hard, but I applaud the design anyway. On several occasions I’ve lost the silicon tips from earpieces while travelling because they’ve caught on something and simply slipped off. A couple of minutes struggle now to avoid being stuck on a plane with unusable earphones is a good trade-off.

In use the control/microphone panel adds a little weight to the right hand side of the assembly, so the neck cable tended to slide to the right, requiring occasional readjustment. I was about to write that that was the only usage problem, when I remembered that also in the box was a tiny clamp through which you can thread a loop of the connecting band, shortening it to your preferred length. I did that, and all was fixed.

The sound was amongst the best I’ve heard using earbuds. As seems to be inevitable with anything you actually poke into your ears, it leaned a little towards brightness, but was restrained and controlled in that brightness. The cymbals in the track “Falling Down” on Muse’s debut album Showbiz were delicate, tight and very, very sweet. Matt Bellamy’s falsetto stayed entirely clean, unmarred by any sibilance.

Likewise for a track that often invokes a nasty sibilant bite: Laura Marling’s “Take the Night Off” from Once I Was an Eagle. The restrained acoustic drumming on that album had a nice solid heft in the bass, without excessive emphasis. Indeed, the bass itself may have been just a bit restrained. My judgement on that wavered, depending on the track and music. For example, I have some Bach pipe organ works playing right now as I’m typing this – from a Telarc recording, so you know the bass is going to be impressive – and I was thinking that the pedal wasn’t quite as strong as I would have liked. But then the climax came and I had to change my mind, for the throbbing power was quite evident.

One other characteristic of these earphones was their high gain. That meant that even material recorded at a low average level – that pipe organ, for example – could be played back at satisfying, even excessive, volumes. That was particularly useful with classical music, which often suffers from being unable to be turned up enough, and podcasts, which are sometimes recorded too quietly.

This puts responsibility onto the user, though. With regular tracks one can easily turn the level up to damaging levels. Damaging to the listener, that is, not the earphones. They remained clean and controlled up to the levels I was prepared to tolerate.

Incidentally, there are no noises produced by the earphones when you adjust the level, except for a double beep when you hit maximum or minimum. I’d estimate that each tap of a level button produced a three decibel shift.

The volume controls double as skip keys. Hold one down for two seconds to jump tracks. The centre button does the usual play/pause thing, power, Bluetooth, and answers calls. One press mutes a call, a two second hold hangs up.

The range was excellent. Worst case was nearly twenty metres away from my iPod Nano, with the weakest reception when my back was turned to it. Best case, close enough to thirty metres, facing the Nano. It didn’t matter which pocket the iPod Nano was in, nor whether I had it been entirely encased by my hand, there were never any breakups or dropped signals. When I did walk far enough away to entirely lose the signal, to reconnect on getting back in range just took a tap on the centre button, and a moment later two beeps indicated reconnection.

The Optoma NuForce BE6i Bluetooth earphones are amongst the best I’ve reviewed. Excellent sound, plenty of volume, easy and positive in use, and with a good solid connection. That’s all stuff I like.