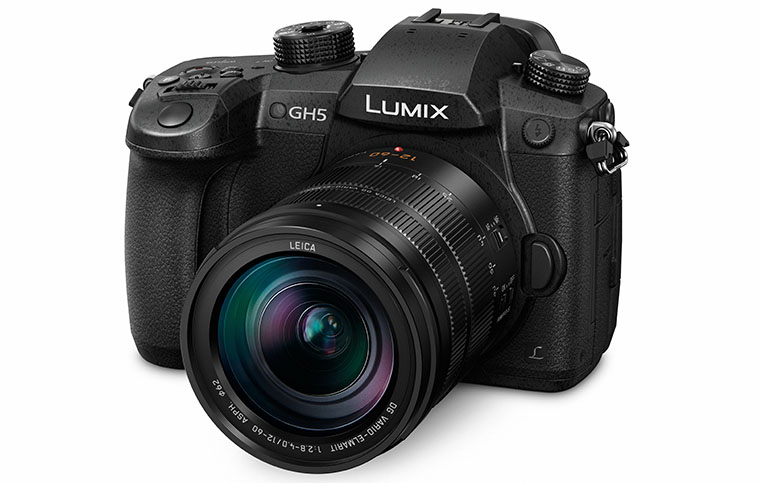 For the past couple of years my own personal and work camera has been a Panasonic Lumix DMC-GH4 mirrorless camera. Easy to use, but with a great deal of power; my experience with it is necessarily going to partly inform this review of its successor at the top of the Panasonic digital camera heap: the Panasonic Lumix DC-GH5.

(And, yes, while previously the model prefixes were “DMC”, they’re now “DC”.)

What hasn’t changed is that this is a mirrorless camera, not a DSLR (for Digital Single Lens Reflex). SLRs, digital or otherwise, have a mirror in front of film or sensor which reflects light upwards into the view finder so that you, the photographer, can see more or less what the camera sees, and thus the picture it will take. When you press the shutter button, the mirror swings up out of the way, the shutter opens (briefly) and the picture is taken.

But the GH5 is mirrorless. You see what the sensor is seeing not optically, but with the picture being relayed electronically from the sensor itself to a tiny display inside the viewfinder. Take a picture and a shutter swings into action but there’s no mirror to move.

That can allow a smaller body, and means less camera shake when the shot is taken.

So let’s look at Panasonic’s latest premium model with that background.

The DC-GH5 has a 20.3 megapixel sensor and uses the Micro Four Thirds mount (shared with Olympus). There are already quite a number of lenses out for this mount since Panasonic and Olympus have been using it for a few years, and while compatible with the older lenses, there are advantages in new lenses.

Previously Panasonic had implemented its optical image stabilisation (OIS) mechanisms in its lenses. With the GH5 it has added this to the camera body. That means it can take better advantage of compatible Olympus lenses (which don’t incorporate OIS), and for that matter a number of fourth party lenses, such as low cost mirror telephoto lenses and so on. New Panasonic lenses have been upgraded so that the OIS in the lenses works in conjunction with that in the body to provide even higher levels of stabilisation.

The DC-GH5 feels like a heftier camera than the GH4, but that aside, anyone familiar with the DMC-GH4 will have little trouble adapting. The major change is the drive mode dial has lost exposure bracketing. Instead it has gained ready access to a new 6K photo mode and to a post focusing feature.

I guess this makes sense. There are so many bracketing options now – exposure, aperture, focus and white balance – that having just one of them on the drive mode dial seems an undue privilege. That said, I’d be inclined to assign exposure bracketing to one of the quick access buttons because it’s something I use frequently.

The GH4 had a 4K photo mode. Essentially this used the 4K video capabilities to take a series of frames, allowing you to do things like choose the point of focus, or capture frames both sides of the moment when you actually press the shutter button. The problem with this was, well, 4K. The 8.3 megapixels was just over half of the 16 megapixels of which the camera was capable. The 6K mode on this camera allows the same things, but at 18.7 megapixels it’s pretty close to the full sensor resolution.

Panasonic has dropped the built in flash with this camera, expecting those needing a flash to add one to the shoe, or to use one of Panasonic’s own wireless models.

A similar extremely flexible swing-out, touch sensitive display screen is used as that in the GH4. Basically just about any way you can hold the camera you can have the screen visible, making photography from odd angles. It offers 1.6 megapixels of resolution. The electronic viewfinder uses an OLED display panel with 3.6 megapixels. The camera can be set to either or have it switch automatically between the two.

A great deal of Panasonic’s attention has been on video with this camera. A great deal indeed. It can record 4K video with 4:2:2, 10 bit colour resolution at up to 30 frames per second. That nomenclature is complicated, but in essence it means higher colour quality. Furthermore, it can record 4K video with 4:2:0, 8 bits, at up to 60 frames per second. As it stands now it can use bitrates of 150Mbps in the various 4K modes, and a firmware upgrade will be released this year which bumps that up to 400Mbps.

If you know what all that stuff means, good. If not, it just means that quality is up and pushing into the realm of extremely expensive professional video equipment.

There are way too many features to even list them all here. Some of the other highlights are contrast auto focus with “Depth from Defocus” modelling for extremely fast operation, a choice of focus points from 225 down to a pinpoint, the full range of automatic and manual exposure modes.

There’s Bluetooth and 802.11ac WiFi built in. The camera can be remotely controlled via app, and can have photos uploaded wirelessly.

There are two SDXC card slots with provision for seamless switchover between the two, whether taking photos or video.

Panasonic says that the camera is splash, dust and freeze proof. Down to -10 degrees in the latter case, it says. It uses a magnesium alloy diecast frame for ruggedness.

I had hands-on with this camera twice. Secondly, for the most recent couple of weeks here in my office, but also for a few days a couple of months ago as a guest of Panasonic for the camera’s launch in Queenstown, New Zealand.

The unit provided for use in both cases was the DC-GH5LEICA variant which bundled in a Leica DC Vario-Elmarit zoom lens. This had a 12mm to 60mm (24mm to 120mm in 35mm equivalent terms) focal length with an aperture of f/2.8 to f/4.0. I have to say that this is an extremely fine lens, and if limited to a single lens with this camera this would be very near the top of my short list. It was very low in distortion, and consistently permitted a pin-sharp image. It incorporates optical image stabilisation that works in conjunction with the camera’s own.

I also used the camera with a couple of my own lenses (which I purchased for use with the GH4). Specifically a 100 to 300mm zoom (200 to 600mm equivalent) zoom telephoto and a fixed 30mm (60mm equivalent) with macro capabilities.

The SD card was one provided by Panasonic; a 128GB SDXC card with a UHS-I bus, Class 10 and UHS Class 3 speed, and 95MB/s read and 90MB/s write speed. That was sufficient for all the 4K recording and of course any bursts I felt like taking.

In use except for the loss of the readily dialled-in exposure bracketing, the camera was like coming home to something familiar. With, in general, some improvements. For example, there’s now this little joystick, hardly noticeable, to the right of the viewfinder. This replicates the use of the arrow key cluster, but is easier to use since your right thumb goes on one thing, pushing it this way and that, without having to dance your thumb over five separate buttons without looking.

One small change I’d hoped for from the GH4 was a move of the “Display” button from the right hand rear of the body – right where the base of my thumb consistently presses it, causing unwanted changes to the display mode – to somewhere, anywhere, else. Sadly, it’s still there. Fortunately, the display key doesn’t do anything dire if accidentally pressed.

But another control placement problem on the GH4 has been fixed. The video record button was on the back right next to the focus mode selection switch. I don’t know how many times I flicked to manual focus with the GH4 and on returning my eye to the viewfinder, found I was accidentally videoing something. This has been relocated to a more prominent position on the top of the camera, and the action of the focus selection lever has been reversed so that it now operates more easily.

The camera was a delight to use. The auto focus was fast and the manual focus on the Leica lens smooth and sure. Focus peaking (showing a blue outline on the item which is in focus) and automatic magnification of the focus area in the viewfinder and rear screen made a sharp focus easily achievable.

The New Zealand foray provided by Panasonic allowed some testing of the kind in which I wouldn’t normally indulge. On arrival we press creatures were stuck in a number of jet boats and taken for a far from leisurely tour of parts of Lake Wakatipu. It turns out that a jet boat which rotates frequently and rapidly in a counter clockwise direction tends to dump the most water on the person in the back, right-most seat. Which, as it happens, was where I was sitting.

The cleaning cloth for the lens was soon soaked from wiping it off, but neither the camera nor the lens seemed to mind.

On another occasion we had the opportunity to try out the 6K mode with some well-practiced and fearless BMX cyclists. Given my slow reflexes, the ability to capture a second’s worth of shots at 30 frames per second meant that I actually captured some useful ones. That said, I had been intending to extract some specific frames but Adobe Lightroom doesn’t yet appear to support this 6K mode, although it works fine with regular 4K video shot on the camera. I’d guess that will be solved in the future.

I generally transferred photos from the card to my computer using a fast Lexar SD card reader. Reading from a fast card within the camera, it ran at a little under 30MB/s. Fast to be sure, but only a third of what the SD card could have provided. One especially nice feature: USB connectivity is now via USB Type-C instead of the weird plug used on the GH4. If you’re travelling and forget to bring your cable with you, you ought to be able to buy a new one most places.

I fear I’ve kind of skipped over a particular strength of the Panasonic Lumix DC-GH5 camera: video. I’m not a great videographer. Present at the NZ launch, though, were a couple. Some presentations of material one had shot on the camera were, well, indistinguishable from what you’d expect from a Hollywood crew with a few tens of millions of dollars in the budget.

We’ve reached a point where for $2999, plus the cost of lenses, stabilisation rigs and so on, an enthusiast can replicate the quality of the best documentarians. If he or she has the talent. The Panasonic Lumix DC-GH5 provides the quality, and makes things as easy as technology can. But it’s up to the user to wield that power to achieve the best results.

Overall
Features
Value for money
Performance
Ease of Use
Design
Reader Rating0 Votes
First class video and photo performance, fast and accurate focus, twin cards, excellent glass on tested model, highly flexible view screen
Quite the price increase since the DMC-GH4, still got the “Display” button in an place where it gets tripped accidentally
4.6