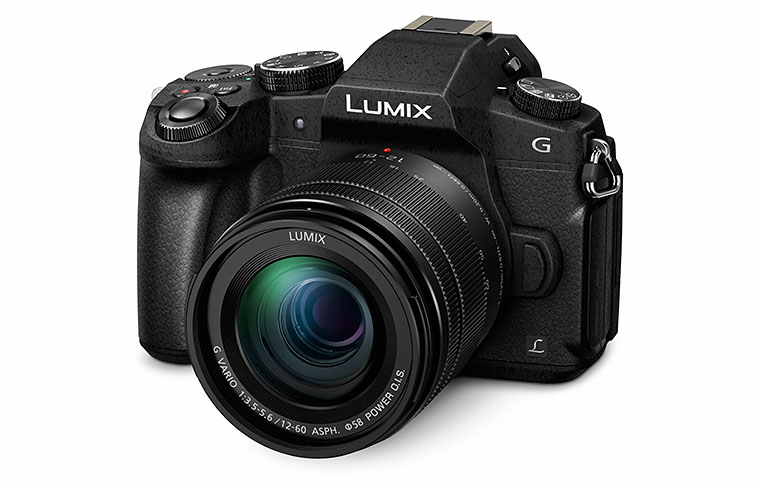 This year sees the launch of Panasonic’s latest line-up of Lumix branded cameras. The first one I’ve gotten my hands on is the new Panasonic Lumix DMC-G85, an interchangable lens model one step down from the flagship Lumix DMC-GH5. It came with a weather-sealed 12 to 60mm, f/3.5 to f/5.6 zoom lens, recommended retail price $1699.

Panasonic’s interchangabe lens cameras all use the Micro Four Thirds system it co-developed with Olympus a few years ago. This features a sensor around a quarter of the size of a 35mm frame in a 4:3 aspect ratio, somewhat squarer than most formats, and which is smaller than most DSLR or indeed mirrorless formats. That allows for more compact camera bodies. The DMC-G85 body is in fact quite compact. With battery and SD card, the camera body weighs 505 grams. The included lens brings it up to 715 grams.

It is a solidly built, thanks in part to the magnesium alloy frame. Designed to be “weather-sealed”, Panasonic doesn’t mention any IP ratings but says that “the camera’s weather-sealed splash and dustproof design protects all joints, dials and buttons against extreme conditions.” So I guess that you could be confident when it comes to a brief rain showers. Of course, weather-sealing the camera doesn’t automatically confer similar protection to the lens, so you should keep which lens you’re using in mind if rainy conditions threaten.

Most Micro Four Thirds (MFT) system cameras use a 16 megapixel sensor, as does the DMC-G85. It is compatible with all MFT lenses, including those from Olympus. Arguably more so than in the past. For some reason, Panasonic adopted the practice of building its optical image stabilisation into its lenses, while Olympus built it into its bodies. So Olympus lenses typically lack OIS, meaning that you’ve needed a steadier hand to use them with a Panasonic. No more. The Panasonic Lumix DMC-G85 has a five axis OIS system built into the body. The supplied lens also has optical image stabilisation.

MFT is also a mirrorless system. Instead of a mirror reflecting the image from the lens up to the viewfinder, the image sensor sends what it’s about to capture as an image to a tiny 2.3 megapixel OLED display in the viewfinder. Dioptre adjustment is provided so that you can focus clearly on the displayed image.

Likewise, it is displayed on the rear monitor, a one megapixel TFT LCD touch sensitive display. This can swing out from the camera body, hinged at the left, and rotate through about 240 degrees so that you can use it as a viewfinder while sitting in front of the camera, while holding over your head, or looking down on it from above.

The advantage of mirrorless is quieter and smoother photo taking, since there’s no need to flip a mirror out of the way. The shutter itself is much quieter than that of the Panasonic Lumix DMC -GH4 which I normally use, and the GH4 is pretty normal in level. You can also switch to silent mode – which means no shutter at all, just capturing the image from the sensor for a specific period. The physical shutter can also work in “Bulb” mode for up to two minutes (ie. you can hold it open for low-light effects).

If you still think in 35mm film terms as I do, the Micro Four Thirds system makes mental conversion of focal lengths easy: you just double the number to get the 35mm equivalent. So the supplied lens can zoom from a decently wide-angle 24mm to a decent telephoto 120mm, a nice practical 5x range.

This camera is seriously chock-a-block with features. For example, there’s built in WiFi so you can use Panasonic’s control app – available for iOS and Android, of course – to view what the camera’s seeing from a distance and remotely trigger it. Or upload photos wirelessly. 802.11b/g/n is supported, along with direct connections with portable devices.

As for photography-focused features, there are all the normal things that you’d expect, including support for RAW image capture (ie. unprocessed by the camera’s “Venus” processor), exposure compensation, exposure bracketing, autofocus, manual focus, adjustable ISO (up to 25,600). And basically everything you’d expect.

Plus a bunch of stuff that’s new or advanced. Take ISO again (ISO traditionally was a measure of the speed of the film). Obviously the default mode is auto, and this adjusted within a reasonable range to give a good balance for quality without excessive noise. But if you’re distrustful, you can set a limit to how far it will be adjusted.

Also, take bracketing. I’m jealous. My GH4 has highly effective and adjustable exposure bracketing. The DMC-G85 has that, plus aperture bracketing, plus white balance bracketing, plus focus bracketing, also known as focus stacking! It can take up to 999 continuous shots with the focus adjusted slightly across a range. Perfect for creating composite photos with virtually infinite depth of field with Photoshop or other software.

Perhaps you’re not sure what depth of field you actually want. Aperture bracketing allow up to five shots to be taken at different apertures.

Want to get more creative? There’s also stop motion and time lapse modes which turn series of images into video. Quality? Up to Ultra High Definition if you like!

The camera has a microphone input in case you’d like to use an external rig to enhance the quality of the sound in video recording.

Panasonic gives several purchase options for the camera. Rather than with the weather sealed lens, you can purchase the camera body alone for $1399 (for example, if you’re just upgrading from a previous Micro Four Thirds camera, Panasonic or otherwise). Another version includes a 14 to 42mm lens (3x zoom, 28 to 84mm equivalent) for $1499, while a fourth option includes Panasonic’s 14 to 140mm (10x zoom, 28 to 280mm equivalent) for $1999.

In the box in addition to the camera and lens, you get a plastic caps for both ends of the lens and the camera, a battery, charger, power cord, shoulder strap and the Basic Owners’s Manual. You’ll have to follow a link in that manual to download the full 338 page Owner’s Manual.

This camera is about as easy to use or as hard to use as you’re comfortable with. It’s a good camera for bumping up your skill level.

For the learner, all you need to is set the mode dial to iA+, which lets the camera make all the decisions for you. Then just switch it on, frame your shot and press the shutter button. For videos, just press the record button. Press it again to stop recording. That’s it! It was ready and focused from switch-on more quickly than I could complete framing the shot. Certainly less than a second.

Then you can learn bit by bit. A handy button selects exposure compensation and thumb wheels (both front and back) adjust it. Soon you’ll be overcoming lighting problems. The Auto Exposure/Auto Focus button might attract your attention and you’ll discover that you can set either or both for one part of the image and hold it while you reframe for a better composition. Then you’ll wonder what the switch is around that button, and find it selects between auto focus modes plus manual focus. And so on.

The early days of mirrorless cameras sometimes made manually focusing less precise than optical systems, but with this camera it proved simple. In part that’s because of the smooth operation of the focus ring on the supplied lens (the zoom ring was equally smooth), but also because of the “peaking” provided in the display. When you’re focusing, the centre part of the picture doubles in size and parts that are in focus are highlighted in cyan.

But you can also use “Post Focus” mode, for which there’s a setting on the drive mode dial. (This mode was added by a firmware update to the GH4, but it’s buried in the menu system.) This nifty feature shoots a brief 4K photo, with each frame focused on a different part of the image. You can then choose which frame or frames you want to save, either in camera or in suitable software (Adobe Lightroom does the job nicely). As the name implies, you get to choose which area of focus you want later. Since it’s using 4K video mode, the resulting pictures are only 8MP instead of 16. Nonetheless, for a lot of work this suffices.

The auto stabilisation feature worked well, reducing the effect of my natural wobbliness to a minimum. The button layout on the right rear is fairly dense. There are useful shortcuts and some buttons that you can switch to other functions that are useful to you. I found some of them a bit too susceptible to being accidentally pushed by the heel of my hand, but less so than my GH4. The record button is now on the top rather than under the focus select lever, which is nice (just yesterday I accidentally started recording video while trying to select manual mode on the GH4).

The autofocus was fast and very accurate when a clear subject was in view. If using the display screen rather than the eye piece, a touch on the area of interest gave that point priority for lighting and focus.

The supplied lens with its 5x range should be a good all rounder for travelling. I tried the camera also with my 30mm Panasonic Macro/prime for great results on some close ups.

The Venus processing engine produced JPEGs that were just about flawless, with file sizes for well lit full frame pictures ranging from around 6MB to 8.5MB per picture.

Finally, how well does the weather sealing work? Sorry, I view such things like I do a seatbelt. It’s a safety factor that’s nice to have, but not something I put to the test.

I enjoyed using the Panasonic Lumix DMC-G85 a great deal. It will work as point and shoot, and will reward the enthusiast who wants to accumulate some lenses and learn the full capabilities of a very powerful camera, as described in that 338 page manual.