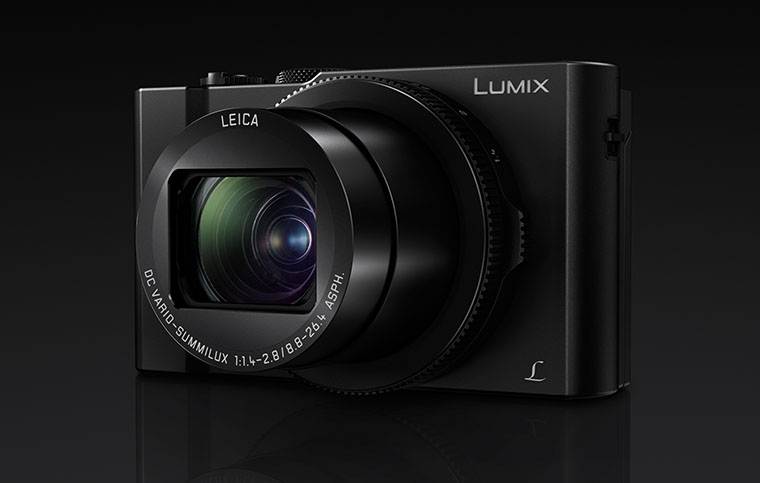 I love interchangeable lens cameras, but let’s face it, they’re bulky. What if you want most of their features, barring only the choice of lens, in a compact package? Panasonic’s here to help with the Lumix DMC-LX10 compact camera. No cheapie this one, it offers an exceptional range of features, not the least of which is a Leica DC Vario-Summilux lens.

Aside from the fixed lens, the only other major sacrifice one makes is the lack of viewfinder. It’s the rear display panel only when it comes to framing your shots.

Other than that, it’s hard to see what’s missing. The camera will take 4K video (at up to 30fps) as well as lower resolutions. It has a 20.1 megapixel, 25.4mm MOS sensor yielding pictures up to 5472 by 3648 pixels in a 3:2 aspect. An assortment of lower resolutions are available.

Pictures are recorded to an SD, SDHC or SDXC cards, the last with capacities up to 128GB supported. There are two levels of JPEG quality available along with RAW. (RAW format skips all the JPEG compression and usually some of the picture processing, allowing you to do all processing in software in your computer.

It offers a similar range of picture modes as a full blown SLR, from “iA” – Panasonic’s “Intelligent Auto”, through program, Aperture and Shutter priority to full Manual. Aperture priority is made easy thanks to the ring around the base of the lens to adjust it. Well, easier. It was sometimes difficult to avoid nudging the multipurpose ring while adjusting aperture.

And speaking of aperture, this one goes wide. With the widest angle lens setting, it’ll open up to f/1.4. At maximum telephoto it’s limited to f/2.8. The zoom range is from 8.8mm to 26.4mm (which is 24mm to 72mm in 35mm equivalent speak*). That’s a 3x range. There’s also a 4x digital zoom, but that kind of thing is usually best avoided. That’s relatively limited given that some cameras these days offer 30x or more, but that’s the price you pay for Leica glass and that f/1.4 speed. The lens is constructed of eleven elements in nine groups.

Panasonic has included quite the range of photographer friendly functions in this camera. Of course, there’s manual exposure compensation, but there’s also bracketing, not just for exposure, but for focus (up to 999 shots!) and white balance.

There’s also a 4K picture mode. Why, given this is only 8 megapixels rather than 20? Well, it uses the 4K video function to provide some nifty functions. One is 4K burst mode. Since there’s a real full resolution burst mode as well, the main advantage of this is speed (30 frames per second) and the pre-burst setting, which captures a full second before you press the shutter plus a second after. The resolution might not be as high, but you’re less likely to miss the money moment.

Also available in video mode: time lapse, which takes a video frame at preset intervals so when played back you can see flowers open and so on; stop motion, which is much the same except that the frames are captured when you press the shutter button (so you can make animations); and slow motion (with a maximum resolution of full high definition).

Audio is recorded, and there’s a tiny speaker on the bottom to output the sound if you want to preview your videos. There’s also a HDMI output.

The 680mAh Lithium Ion battery is charged in place, not in a separate charger. You’ll need to plug the power cable into a USB power adaptor (one is included) or a computer. Panasonic rates it as good for 260 shots, and I’d be surprised if it fell far short of that. If you plug it into a computer, then you can transfer photos and videos to it. The camera pops up as flash memory, so you can just navigate to the DCIM folder and drag in photos.

You could also use the WiFi function to transfer photos to a computer or smart phone, or send them via DLNA to a TV or a suitable printer, or to social media sites via Panasonic’s own cloud service (called “Lumix Club”). In addition, you can use the WiFi connection to remotely control the camera using your smart phone (Android or iOS), complete with picture preview. That’s probably the most convenient function.

While it’s not obvious from the photos, there is a built in flash. It pops up from under an inconspicuous panel on the top of the camera when you slide its control lever.

The camera is only 106mm wide, 60mm tall and 42mm deep and weighs 310 grams, while switched off but ready to go. Extending the lens full in telephoto mode adds about 45mm to the depth. The rear display screen is 75mm on the diagonal, is touch sensitive, has 1040 pixels and can be tilted – being hinged at the top – by up to 180 degrees.

The lens has a built in shutter to protect it when the camera is off. It goes into its protective standby mode after a few minutes of non-use, but can be woken up almost instantly with a touch of the shutter button.

The camera switches on fast and focuses fast. It took me about two seconds to grab a shot (wide angle – the lens always opens that way) from the camera being switched off. For point and shoot work, just leaving it in Intelligent Auto mode, and manipulating the zoom with the ring around the lens produced very respectable shots. There was virtually no noticeable lens distortion across the zoom range, while Panasonic’s processing engine and sensor captured colour and brightness graduations very effectively.

The auto focus was nicely accurate, and with the macro setting could focus on objects down to 30mm from the lens (in wide angle mode). The shutter release uses the standard two level model: a gentle press for focus, and then a harder press to complete the shot. In program and more manual modes an area for focus can be chosen by touching the appropriate area on the screen.

Now a manual focus mode might seem rather pointless in a camera that is both very compact, and lacks a conventional viewfinder. But in fact it is implemented extremely effectively. First, the focus ring (the one that works as zoom in auto focus mode) is smooth and nicely balanced between providing fine graduations for precise adjustment, and quickly getting from one extreme of focus to the other.

Making things easier with the manual focus is that the centre of focus zooms in on the display for improved clarity, and by default “peaking” is added to areas that are in focus, making it very easy to get things spot on. Remember, you’re typically not using manual focus to improve on the camera’s autofocus, but to select a different thing to focus on than what the camera would prefer. A bird, for example, through the bare branches of a tree. Cameras will often focus on the twigs, not the more distant bird.

One potential issue with the lack of a viewfinder is the clarity of the view from the display screen outdoors. No problems here. I checked outside in 35 C heat and framed a few pictures with the sun beating fully onto the display screen. Initially this highlighted my fingerprints, but a quick wipe fixed that and the view was quite clear enough for accurate aiming and zooming.

The swing-up display screen proved extremely useful in getting shots from unusual angles, especially from down near the ground. The touch function was nicely sensitive and supported multi-finger touch for things like zooming a picture during playback.

If there is one real problem with this camera, it’s only that there is a lot of functionality – and, of course, controls for that functionality – spread out over quite a small surface. Sometimes those of us who might be termed “fat-fingered Australians” might have trouble holding the camera and manipulating certain controls without accidentally making other adjustments. Likewise, fairly sharp close vision is needed to properly discern the markings on some of the control buttons, although that problem would ease considerably with familiarity.

I found the WiFi functionality kind of variable in usability. I simply could not get it to find my PC to send photos wirelessly. However the Panasonic remote software worked well from an iPhone, and it was reasonably usable sending photos for display via DLNA. For photo transfer I either popped out the SD card, or used a cable. The transfer speed was slowish via cable, around 10Mbps. The UHS Speed Class 3 card can support writing speeds more than twenty times that, so I’d be surprised if it couldn’t be read a great deal faster.

In general the picture processing is pretty good, but I found the in-camera focus stacking routines produced variable results. You can grab individual frames for the specific focus you want from the 4K photo recording. You can merge all the frames in the 4K sequence to automatically optimise focus. Or you can specify a range (by picking points of focus you want included). The individual frame grabs as what they are. The full merge tended to focus, so to speak, on areas of the picture I didn’t necessarily agree upon. The third tended to give best results. The Rodin statue example on this page demonstrates that.

So what we have here is an incredibly feature-packed and powerful camera in a tiny little package, small enough to go into a pocket or handbag. Why bother when everyone has a camera in their phone? None of those will deliver the flexibility or quality available from the Panasonic Lumix DMC-LX10.

* Technically, the 35mm equivalent focal length actual varies according to picture mode. The 4K photo mote, for example, uses a smaller frame in the centre of the MOS sensor panel, and so is 36 to 108mm equivalent. But that’s pretty much the case with all cameras that offer different resolutions.