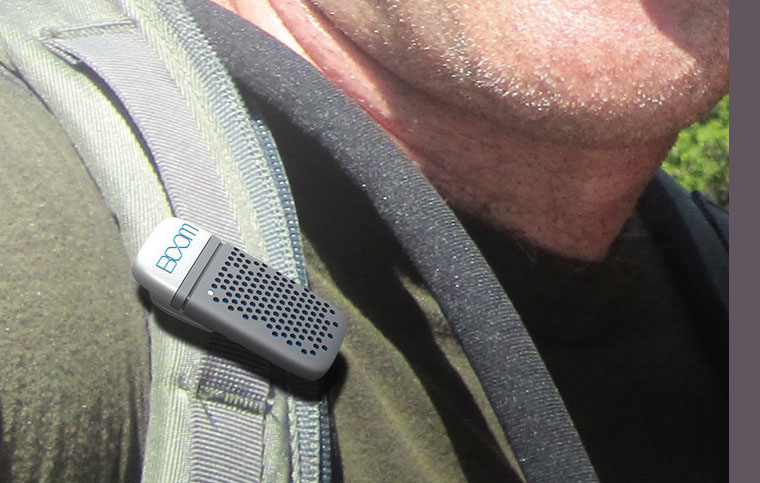 Personal audio normally goes with silence. You plug your earphones into your ears and you can take your music everywhere you go, usually without sharing it with others. But the Polk Boom Bit is quite different. It’s very much portable – “wearable”, Polk calls it – but it’s a speaker, not headphones.

Now itty bitty Bluetooth speakers are far from new. I’ve got one on my shelf that’s a six centimetre flattened sphere. But this one’s even smaller. It’s 72mm long, but only 36mm wide and 22mm deep at the deepest point. That last one’s deceptive because that includes the pen-style clip. If you ignore that, the body of the speaker is only 15mm deep. The whole thing weighs 34 grams. The picture with the iPod Nano gives a good sense of the scale.

It’s available in five different colours. The review unit was blue and, with the black one, was probably the most conservative in colour. Also available: red, yellow and pale grey with aquamarine highlights.

Inside that is what Polk calls a 25mm full range transducer, driven by a little 1.5 watt amplifier. Bluetooth 4.1 is used. There’s no mention of a specific audio codec, so we can assume that it’s the basic SBC stereo audio system. With a speaker of this size, no matter how well engineered, I doubt that adding AAC or aptX would make much of a difference.

The whole thing is rubberised and quite robust, and was formerly waterproof. The brochure said that it was rated to IPX7 waterproof rating. That stands for “Ingress Protection”. The “X” means that it wasn’t tested for dust. The “7” means up to half an hour in up to a metre of water.

However I’m informed that this waterproof claim is no longer in force. My guess is that the waterproofing is fine, if one is careful with the end cap. But it’s too easy not to be sufficiently careful.

It is charged by means of the full size USB plug hidden under the rubber end cap. No need to carry a charging cable, so long as there’s enough space on a computer or power adaptor to plug it in. Charge time is one to two hours. Playback time is up to three hours.

Polk is better known as a hifi speaker maker, and the hifi culture persists. So it quotes a frequency response for the speaker: 325 to 20,000 hertz.

Don’t expect too much and you won’t be disappointed. This is a tiny little speaker, but it goes reasonably loud. Not loud enough to avoid being drowned out by environmental noise such as passing motorbikes. Plug-in earphones are going to work better in those circumstances. Nor are you going to get party levels. Nor any bass. At all.

Indeed, the first track I played was “Blue Turk” from Alice Cooper’s album School’s Out and the opening bass notes sounded almost monotonal, presumably because all I was hearing were the third and higher harmonics of the bass notes, not the fundamentals or even the second harmonics, making it hard for the imagination and memory to fill in the missing stuff.

But it would be ridiculous to expect any real bass from such a small thing.

Playing some jazz, it was clear that the piano was being driven into very hard clipping when I had the volume up at the highest level (and what other level would one want to employ, anyway?) resulting in some crackling.

So, of course, when you try to drive a tiny gadget like this as though it were an expensive full range system, the results aren’t going to quite measure up.

In practice, though, it was quite boppy, with a rather good sense of dynamics as though there was little to no dynamic range compression, and clearly well extended treble. The midrange and treble were quite well balanced.

The only really odd thing was that in the opening section of “Pavane for a Dead Princess” on Deodato’s Preludes and Rhapsodies there appeared to be some gating in effect, so as the opening notes swelled and then were supposed to wane, they actually disappeared completely.

There are only two control keys: for volume plus and minus. Other operations are managed by holding them both, or pressing them both. Since they’re fairly stiff this kind of manipulation can be a slightly uncertain affair. I needed to focus and mentally rehearse to get it right, but I expect if I used the unit regularly for a while it would become second nature.

The three hour battery life seems about right. Shorter, though, if you’re running the volume at levels high enough to cause that jazz piano to crackle.

The Polk Boom Bit is kind of fun, and I can see a use for it, even though I doubt one would want to rely on it as a primary sound producer. Polk has some other outdoorsy, poolside devices in its Boom range that are no doubt equally as much fun.