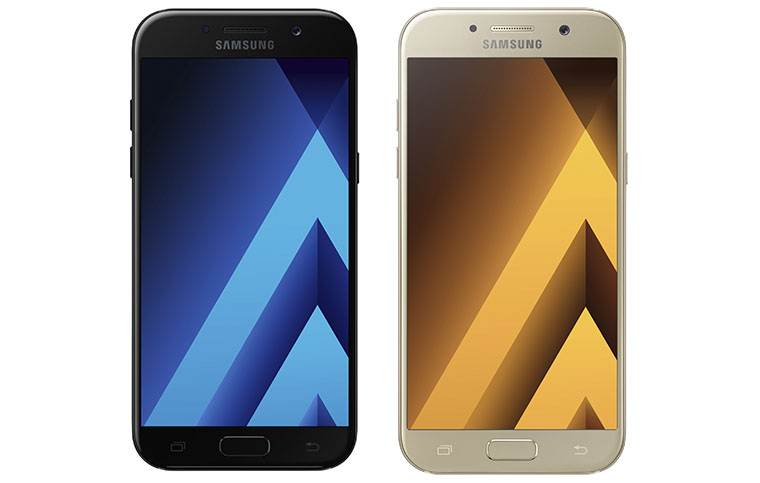 This was emphasised by the visual similarity between the A5 and S7.

The phone is available in colours that Samsung calls “Black Sky” and “Gold Sand”. The review unit was “Gold Sand”. Someone’s going to have to have particularly sharp eyes to see that it isn’t actually a Galaxy S7. The colour is the same as the golden S7 version. It’s a couple of millimetres wider and several millimetres taller, although they are close enough to the same thickness. The A5 has a very slightly larger screen: 5.2 inches rather than 5.1 inches. Some of the holes are slightly different and there’s no camera bump, but I for one before taking delivery would have assumed on seeing it that it was an S7.

The screen, although nearly the same size isn’t really the same. The A5’s screen is full HD, 1080 by 1920 pixels. So it’s lower resolution, although seeing the difference between the two in sharpness is going to be even more challenging. Especially as with the Android Nougat update, the S7 defaults also to 1080 by 1920 pixel resolution. What’s the same is the Super AMOLED screen technology for deep blacks, rich colours, and an always-on screen to show a clock or a calendar and notifications.

The specifications page at Samsung Australia doesn’t indicate the processor in use (although it indicates that its speed is 1.9GHz), and Samsung does tend to use different processors in different parts of the world within the same model of phone, so I ran the CPU-Z app. It simply said that it was an ARM Cortex-A53 processor, and reports that there were eight ARM Cortex-A53 cores running at 1.87GHz. Make of that what you will. It also noted that the processor has 2812MB (close enough to 3GB) of working RAM and 23.58GB of user storage.

However the phone supports the addition of a microSD card of up to 256GB in capacity. Rather than a single tray for both Nano SIM and microSD card, the phone has two separate trays in different parts of its body. The control keys on the A5 are in the same places as the S7, and the home button incorporates a fingerprint sensor.

I figured the phone wouldn’t have the water resistance of the S7. Wrong, it is also IP68 rated, which means it can be submerged in more than a metre of water (not more than a metre and a half, says Samsung) for half an hour.

Speaking of similar features, the phone supports NFC – Near Field Communications – and Samsung Pay. It will communicate with 4G LTE networks, including the 700MHz band. It has GPS and all the usual sensors. The WiFi includes dual band 802.11ac. A regular headphone connection is included. The charge and communications port is USB Type-C. A fast charger is included so it can be filled up very quickly. The battery is rated at 3000mAh.

But there is no wireless charging. So, yes, you don’t get quite everything in the S7.

I was just a little surprised to see that the phone runs Android Marshmallow 6.0.1 rather than Nougat, but it is being generally reported that an update will be appearing soon.

Both front and rear cameras are 16 megapixel, f/1.9 units. Maximum video recording resolution is 1080p30, not the 4K available from the S7. A double tap on the home button will get the camera going even if the phone’s locked (of course, you can switch that off if you prefer).

(To be clear, the formal model number of this phone is SM-A520F.)

Since I was already using a Samsung Galaxy S6 phone, and since the Galaxy A5 implements NFC (Near Field Communications) and a full service automatic update, setting it up was super easy. I unlocked the S6, touched the backs of both cameras for an instant, touched the permission button on the S6 and that was pretty much it. The new phone could have downloaded all my apps, but said that because there were more than a hundred, it was offering a chance to choose. So I picked the forty-odd I’d most need in the next few days and released it to do its thing. After some Samsung account stuff, the phone started with my regular wallpaper already in place and my apps downloading. It was about as pain free as it can get.

Will that work with your old phone? That’ll depend very much on your old phone, but this shows that the Galaxy A5 is capable of handling its end of the exchange.

The screen was gorgeous. I simply didn’t miss the higher 1440 by 2560 resolution of the Galaxy S6 or S7. Only with a magnifying glass and careful examination of specifically chosen items, might one be able to tell the difference.

The phone felt good in the hand. It seemed solid and sturdy. Samsung doesn’t say what kind of glass is used, but Corning isn’t so backwards, saying that it’s Gorilla Glass 4. The body seems to be aluminium or some alloy thereof, covered in glass.

But I’d note that this is a slippery phone. Both front and back are super smooth. Sliding fingers over the screen seems to be a smoother process than most phones. The screen seemed more resistant to fingerprints than most. Because it’s so slippery, you’ll need to be careful, and to get a case.

The processor wasn’t particularly fast. According to the Quadrant performance test, it ran at 93% of the speed of an S7, but do remember that the S7 is somewhat slower than quite a few lower cost phones. The Oppo R9s Plus, for example, is only $50 more than the A5, and the A5 runs at only 72% of its speed. But the Samsung Galaxy S7 has much faster memory than either of those phones. Indeed, it’s slightly more than twice as fast as the memory in the A5.

Regardless of all that, the phone worked well and very rarely with any delay. I am not much of a gamer, though, so if you are, you should probably look to a higher performance phone. It might work fine with today’s games, but next year’s?

All the software worked properly. Notifications interacted properly with their associated apps. The whole thing was just smooth in operation. The fingerprint scanner worked about as effectively as in the S7, which means pretty well, but not as well as in some other phone models.

Perhaps the biggest step down from the Samsung Galaxy S6 or S7 was the camera. It has the same resolution as the former, but it generally didn’t focus as quickly or as well in low light, and the colours of greenery tended to be a touch darker, less glowing. That said, it was rather better than that in most low and mid-cost phones.

The always on screen worked well, as always, and had very little impact on battery life. Chances are it will improve life if you use your phone as a watch to tell you the time because it removes on reason to switch the phone on. The full range of notifications are shown, too, unlike the S7 on first launch (it was later updated with fuller notifications), but the choice of clock and calendar styles is very limited: just two for the clock (there are fourteen for the S7), one for calendar (two for the S7). One of the clock faces can show up to four time zones.

The USB Type-C connection supports OTG – On the Go – connections, so you can use things like external DACs and mouses and keyboards with the phone. I just used the Belkin USB-C to USB-A Adaptor ($29.95). In fact, as I write this paragraph I’m listening to high resolution (192kHz, 24 bit) music on the phone being decoded by an external Digital to Analogue Converter.

I set the camera to send its photos to the microSD card I’d put inside the phone and took quite a few photos that way, but eventually switched it back. It was simply taking too long to save the photos – a second or so – leading to me missing some shots. I’m going to have to experiment with faster microSD memory.

Overall
Features
Value for money
Performance
Ease of Use
Design
Reader Rating0 Votes
Like a much more expensive Samsung phone, all the parts just kind of work together, water resistant, USB Type-C
Gamers after fastest processor may not be satisfied
4.5