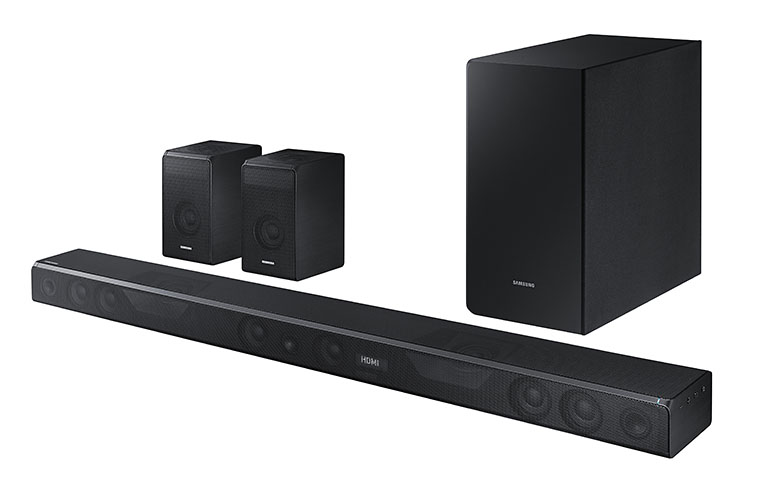 Last week Samsung put me up overnight in a very fancy hotel room with a very fancy (and very big!) TV, and a very fancy soundbar: the Samsung HW-K950. Here’s what I thought about Samsung’s Dolby Atmos-capable flagship. Do remember, being on Samsung-provided premises and far from my usual equipment there were limitations to what I could test.

The Samsung HW-K950 is actually rather more than a soundbar. While there have been many attempts at “surround” soundbars, the results have rarely been particularly impressive and most have given up on trying to create a surround effect from the front. But this one comes with two wirelessly connected surround speakers, designed to be placed to the sides and slightly behind the listeners. In other words, it’s a real surround system.

Another thing soundbars are not very good at is bass, so this soundbar also comes with a wirelessly connected subwoofer.

And, of course, the whole thing is Dolby Atmos enabled. Dolby Atmos does two main things. First, it supports sound “objects”, in which bundles of sound can be steered independently in three-dimensional space. That’s something of considerable use to the sound engineers making sound tracks, but not to we consumers. For our purposes, it is the addition of “height” into the signal that can make a real difference. The ideal Dolby Atmos system will have loudspeakers installed in the ceiling.

But Dolby recognised that might not be possible for many, so it came up with a surprisingly effective workaround: Dolby Enabled speakers. These are normal speakers designed for a surround system: front left and right, surround left and right. But each has an additional speaker driver built into the top, firing upwards at a slight angle towards the ceiling. The Atmos decoder applies special processing to help it seem like the sound from these speakers is actually coming from the ceiling.

And they are indeed built into the soundbar and the two surround speakers.

Samsung isn’t very forthcoming on the traditional points of interest in its specifications. It says that the subwoofer driver is eight inches, and says that the total system power is 500 watts, and that’s about all it has to say about the main workings of the system. I should mention also that there are two HDMI inputs and one output, plus an optical input, plus an analogue audio input, plus Bluetooth. The HDMI inputs can pass through full strength 4K video.

Peering through the grille I could see a bit of what was in there. The soundbar has three groups of three drivers across its front, each comprising of what looked like a 25mm dome tweeter and two 62mm midrange drivers. On top were two larger drivers – perhaps 75mm – firing slightly forwards of directly up in the approved Dolby Atmos Enabled speaker manner.

The wireless surrounds looked to have dropped the tweeters, each employing a single 62mm driver firing forwards and functioning, presumably, as a full range driver. Again, each had a larger driver on top, angled slightly from firing directly upwards. I’m not sure that skipping the tweeter on the surrounds is such a good idea because with larger drivers the treble is far more directional, something you don’t really want in traditional surround speakers. The Atmos drivers are a different matter – you do want them to beam the treble at the ceiling where it can be reflected and dispersed.

The surround bar was frustrating for three reasons. The first was that I didn’t get to set it up. The second was that it took me ages to work out how to control it. The third was that the hotel room in which it was installed was impressive in attempting to conjure up a bygone era, even to the point of having ceilings quite a bit higher than would be the case in a typical home.

As presented to me, the unit produced a fairly good surround field, even overhead, with Dolby Atmos sound tracks. But do remember that the sound gets special processing for Atmos Enabled speakers. I’ve quizzed Dolby Laboratories about this before, but they’re pretty tight lipped about what actually goes into their processing recipe. However, there must be certain assumptions built in, including about the ceiling height. If you’re designing for the masses, you’re designing for a ceiling about 2.4 metres tall, not three or more. I think the hotel room reduced the effectiveness of the overhead stuff in Dolby Atmos. The sound “ceiling” seemed a fair bit lower than it usually does in my office (note: there I have proper ceiling speakers). I’d guess that in a normal home you’d be hearing even better overhead sound.

But it didn’t reduce the general surround sound. There were some vital audio cues in The Fifth Wave, which I watched on UltraHD Blu-ray. They came startlingly from left rear in a highly effective manner. On the Atmos test disc there was a clip in which I heard a dog barking in the distance to my left. Despite being in a boutique hotel room in the middle of Sydney, I could not stop myself from rewinding a little to repeat the section to ensure it was actually on the disc, so realistic did it sound.

The sound quality was actually quite good, with excellent clarity on movies, and a nice listenable sound on music. Listenable, but not entirely accurate. There was a kind of English mellowness to the sound. That tended to sand off the harsh edges on some music, such as some of the excessiveness of the synth drum in Eminem’s track “Stan”. That said, the sound was well extended into the treble and bass.

Bass? For a while there was way too much of it. That’s to do with me not having set the system up and being unable to properly control it (no manual was provided). I felt like quite the goose when I finally worked out how to adjust the volume and subwoofer level. The button labelled “VOL” only seemed to mute and unmute the sound bar. But it turns out you are supposed to push the volume and woofer buttons forwards and backwards to increase and reduce their levels. Talk about feeling silly. In my defence, it has been several years since I’ve played with much Samsung gear.

Anyway, properly adjusted, the sub seemed to extend a little deeper into the bass than expected, causing some palpable room vibrations at times, and it went quite loud, occasionally sounding a touch stressed when I let things go too far. Samsung seems to have opted for letting the subwoofer go as loudly and deeply as possible within physical design constraints, rather than wrapping it in the cotton wool of limiters and filters. That’s fine. As a consumer you should just exercise a little care, and be prepared to back things off if they become too energetic.

Look, I’m the kind of guy who likes more than a hundred watts per channel to his main speakers – including the four ceiling ones – and a several hundred watt subwoofer. So when I say that I thought the Samsung HW-K950 did a quite respectable job, and much better than I’d expected, you can take it that it’s really quite impressive.

And I don’t think you’re going to be able to assemble a full 5.1.4 (Surround.Sub.Atmos) system for anywhere near $1999 anyway. Have a listen.