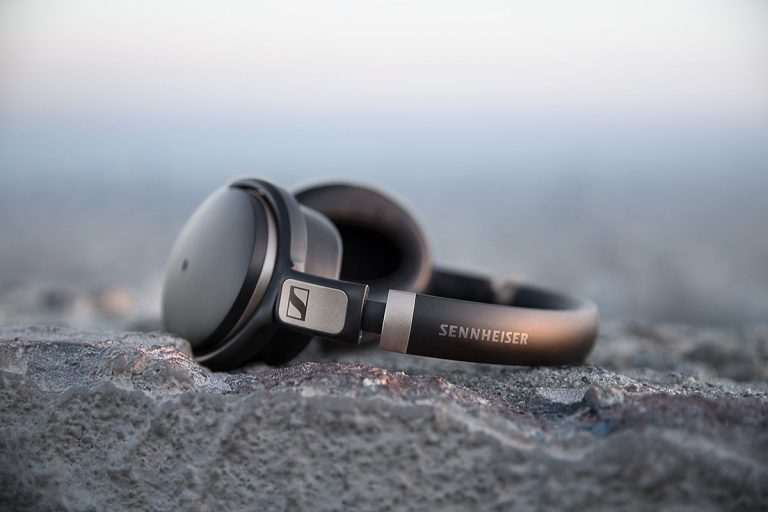 Looking back on our coverage of Sennheiser over the years, I’m reminded of how wireless headphones used to work. Our review of the Sennheiser RS160 headphones opened by discussing the “digital wireless technology from Kleer”. Bluetooth? What was that?

Seven years ago when we published that review, the iPhone was around and would work with Bluetooth, but the iPod (both Classic and Nano) were Bluetooth-less. Wireless headphone connections were for convenience in the home, not for portable devices.

All that has changed now, of course. So we return to Sennheiser and wireless headphone technology as we look at the Sennheiser HD 4.50BTNC Wireless Active Noise Cancelling headphones.

Yes, wireless and active noise cancelling (Sennheiser calls its system “NoiseGard”). Along with their ability to fold up into a relatively compact form and the provision of a soft carry pouch, that makes these ideal for travel, especially on aircraft. However, no two-pin plug adaptor is provided, so you ought to pick up one in an airport newsagency to carry, just in case. On long flights you may not want to use a Bluetooth connection to your music device, but plug into the plane’s entertainment system. If such is still available, rather than relying on your smart device, and if it still uses a two pin plug. These things are changing all the time.

These headphones are powered by Lithium Ion batteries and are rated to run for up to 25 hours on one charge with a Bluetooth connection. That reduces to 19 hours if you’re also running the NoiseGard active noise reduction. Charge time is two hours. Should the battery run down, they can run passively using the supplied cable. This has a 3.5mm plug on one end and connects to the headphone with a 2.5mm four contact plug, so replacement cables may not be readily available from third party sources. But Sennheiser seems to have a pretty good spare parts policy so you should be covered for some years. The earpads are also replaceable, so same deal there.

The Bluetooth version used is version 4.0 and the headphones support NFC pairing, if available on your device, and the higher quality aptX audio codec. They will work fine with Apple devices – indeed, I mostly used them with my iPod Nano – but those two features suggest a slight bias towards Android phones. Remember, though, not all Android phones support aptX. You should check the specs of your phone to see. With Apple devices or non-aptX Android phones, the lower quality but still respectable SBC codec will be used.

The headphones will also do the usual hands-free thing with phones.

All connections and controls are on the right hand earpiece, at bottom rear. The charge port is Micro-B USB while the headphone socket is 2.5mm, as mentioned. For controls there is a power/pair button, a volume rocker, and a multifunction switch. This last can be pressed to play or pause, reconnect to a device, or answer or hang up a call. It can also be slid forwards or backwards to skip tracks, and held in either direction for fast forward or rewind.

Sennheiser says that the impedance of the headphones (when used with their cable) is 18 ohms, that they have a frequency response of 18 to 22,000 hertz, can reach an output level of 113 decibels, and produce less than 0.5% distortion (measured at 1000 hertz at 100 decibels output).

There is a Sennheiser app called CapTune available for iOS and Android which serves up music, and allows tuning of the EQ of the headphones.

As the “active” suggests, something more than mere noise insulation is being provided. That said, the noise insulation is also important. The better that outside sounds are blocked, the less work the active processing has to do. So the best noise reducing headphones are characterised by having closed backs and ear cups that surround the ears (“circumaural”), not just pressed against them.

Sennheiser was famous for popularising and developing “open” headphones, where the rear of the driver in each earpiece was open (acoustically – there’s be a protective grille or grate of some kind) to the outside world. Function forces these headphones depart from that Sennheiser preference.

They also surround the ears. For me it was a reasonably tight fit – they aren’t as generously sized as my old Sennheiser HD 535 headphones – but nonetheless comfortable.

Conceptually, active noise reduction in headphones is pretty easy. It works by using microphones to capture the sound around each earcup, processing it so that it closely matches how it would sound after making its way through the earcups to the listener’s ears, then inverting – turning upside down – the waveform and feeding it into the audio signal at precisely the same level. All going well, that will cancel out the noise.

Clever, huh? Of course, it’s harder than that in practice, not least because all the processing has to happen in the briefest instant of time that it takes for the sound to pass through the earphones. It’s really pretty amazing that it works at all.

I spent several dozen hours wearing these headphones and I’m pleased to report that they were very comfortable, yet remained securely in place. The headphones were fairly easy to operate. I found the buttons a touch spongy, and it was too easy to accidentally skip a track when I was trying to fast forward, but that’s likely as much due to my chunky fingers as anything else.

The Bluetooth connection was usually very reliable. At one point after many hours of use the connection with the iPod Nano started to get flaky, with the headphones announcing by female voice from time to time “Connection Lost”. I’m not sure quite what happened there, but it may have had something to do with the headphones also being paired to an Android phone which was only intermittently within range. But first a reboot of the Nano, then a switch off and on of the headphones, fixed all that.

The character of the sound depended quite significantly on whether the noise reduction was on or off … even in quiet environments. Of course, in either case there wasn’t the open spaciousness of my old HD 535 headphones. That comes with closed-back territory. Nonetheless, with a closer feel the sound was very good. In both modes the treble was clear and delivered with a delightful subtlety, and good restraint. There was none of the harshness often produced by headphones. The bass was strong and extended in both modes as well. But with the noise reduction off the upper bass was more prominent, with NoiseGard off, it was more restrained.

I actually quite liked both, but I used preferred to leave NoiseGard off unless there was significant noise to combat. There were several reasons for that. One was you get a longer battery life without it. Another was my general preference for less processing rather than more. But the main one was that with it on, it produced unwanted noise of its own when I was walking (in my usual clunky, stiff-legged manner). Indeed, at first I thought that the headphones were damaged. If I shook my head just so, or strode a bit too stiffly while on my walk, there would be this small clunk within the earpieces – the right one more than the left – which felt and sounded like some component had come loose within them. When I eventually worked out how to switch off the noise reduction, however, it went away.

It soon became evident that this noise was shock-related. When sitting or standing or moving smoothly, there wasn’t the slightest noise and, as I said, it was only with noise reduction on.

Since that was my preference, it suited me perfectly. I’d be using the noise reduction while sitting (basically, locked in!) on an airplane, and have NoiseGard off when walking the dog.

Used with the cable, NoiseGard is still available and made a similar slight change to the character of the sound.

There was not a great deal of volume headroom when used with a Bluetooth connection. I could easily tolerate the highest level setting even with fairly loud stuff like Eminem’s The Marshall Mathers LP. It was loud enough, but I would have liked a touch more gain available because some tracks are recorded at a lower level.

The headphone drivers themselves could take it. When I drove them from a high quality headphone amplifier by cable, they could go cleanly way louder, and produced fine sound with great authority.

The passive noise reduction was somewhat effective, knocking the edge off my test aircraft noise (I didn’t happen to fly while testing the headphones). I had it running at an average level of 90dB SPL (C-Weighted). But when I switched on the NoiseGard active noise reduction, the level went way down … especially in the lower midrange. I played some podcasts and the voices were clear at a much lower level with the NoiseGard running. Which made both for a far more relaxing listen, and would no doubt be much better for my hearing after a few hours on a plane.

Sometimes there was a slight sensation of pressure in my ears when using NoiseGard (because, I think, the cancelling isn’t always perfect). This seems to be common to the breed when a fairly aggressive approach has been taken to noise reduction. Another reason not to use noise reduction when it’s not necessary. But it’s great having it there, just a press-and-hold-for-a-second away for when you need it.

The Sennheiser HD 4.50BTNC Wireless Active Noise Cancelling headphones turned out to be comfortable, effective and fine sounding. At $299.95 the price is pretty reasonable too. Certainly worth checking out.