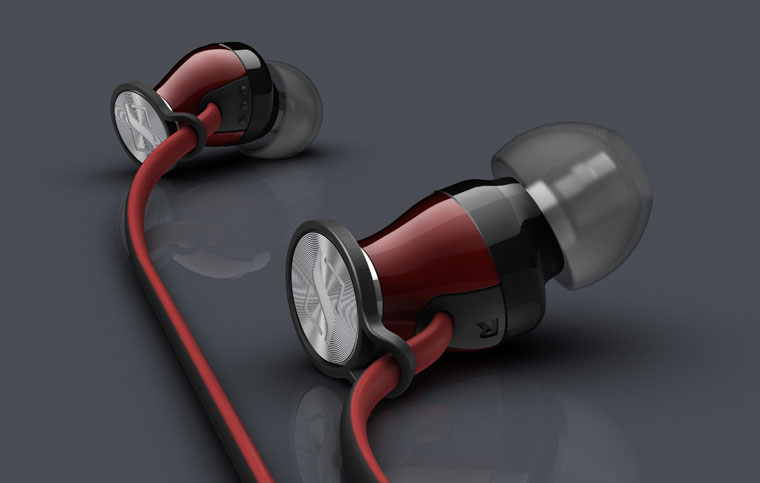 Earbuds are for many of us – well, me at least – an essential part of life. I prefer headphones, but I feel too much like a goose wearing them outdoors, and now that summer’s coming, wearing them can get awfully hot. Sennheiser is one of the kings of headphones, so let’s see what it can offer in the way of earphones.

The Australian distributor chose the Sennheiser Momentum In-Ear earphones (model number M2 IEG) for me to review. As you can see from the number on the little “price” box on this page, these are not cheap. But, heh, Sennheiser!

They certainly don’t look cheap. They’re available in two colours: grey/black and red. It was the red ones that were supplied. This is a deep, metallic red that looks pretty classy. The cables are red on one side, black on the other. At the earphone end the cables receive some support by means of a loop of plastic on the earphone bodies. The right one is labelled “R”, but that’s very hard to read. The left one has three raised dots instead of a label so you can identify it by touch. But since the controls and microphone (yes, it works for hands free calls) are on the right side, that strikes me as the simplest way of getting them the correct way around.

Speaking of which, there are volume controls as well as play/pause on the Sennheiser Momentum In-Ear earphones. There are two models: one for Apple devices and one for all the rest (principally Android phones). The play/pause button works the same on both models, but the volume controls for Apple are different to those for Android. I reviewed the Android model, but aside from volume control they worked nicely with an iPod Nano.

The cable is one metre in length from the right-angled, gold-plated 3.5mm plug to the point where the cable splits into left and right. Those left and right sections are a further 400mm long. A small sleeve can be slid up the separate left and right cables to bring the split closer to the listener’s chin, if desired.

A neat cloth-covered, hard pouch is provided to house them. This is large enough to also accommodate an iPod Nano.

It took me about three days to even notice one of the excellent things about the Sennheiser Momentum In-Ear earphones: they were highly resistant to tangling. On one occasion I managed to tie them up in a knot, but a simple one, easily undone. Otherwise a flick of the wrist has easily shaken out a tangle. I don’t know if it was Sennheiser’s intention, but it’s like, I don’t know, they tried leaving out the nooks and crags on which cables can catch, and made the exterior of the cable itself smooth and moderately slippery, so it doesn’t catch on itself. Furthermore, I discover on reading the website (and the back of the box), the cross section of the cable is elliptical rather than circular. Consequently a slight twist on one section of cable where it touches another is likely to release any snagging.

That relatively tangle-free operation really does improve the experience. The several seconds it takes to untangle earphone cables are weirdly infuriating.

On the subject of cables, they turned out to be nicely quiet. Quiet cables you query? Well, you’ve got these knobs plugged into your ears with cables attached. Any friction or other mechanical action on those cables can be transmitted acoustically along their length, right into your ears, just like along the string of a child’s tin-can “walkie-talkie”. With some earphones over the years I’ve had to hold the cable away from my body while walking in order to enjoy interference-free sound.

These cables transmitted no sound from sliding on clothing – which earphone cables inevitably do – and only a little deep bass when tapped or thumped.

They were comfortable to wear. There are four sizes of silicon pads to wear so the correct fit for just about everyone’s ears ought to be assured.

I don’t use the earphones that come with phones. They sound horrible, or they both sound horrible and are horrible hard little hard things don’t seal properly in my ears and have to be continually reseated (I’m looking at you Apple).

I normally use earbuds costing around $50 because they break so often and I use them mostly for podcasts, where audio quality doesn’t matter. Music typically sounds much better with this level of earphone than those packed with most phones, but that doesn’t make them very good.

It didn’t really matter what type of music. Right now as I’m typing I’m listening to the excellent modern Jazz album “Mercury” by the Alister Spence Trio (co-incidentally, the track playing is called “Momentum”). The Trio is piano, bass and drums, and I have to say the drums are gorgeously realised, ringing out with all their character presented as a coherent whole, rather than being split up into different frequency bands.

Laura Marling’s close-miked voice on “Once I Was An Eagle” was almost a peculiar experience, being delivered directly into my brain with an astonishing “right there” presence unlike just about any other singer. While listening to the track “Little Love Caster” I was distracted by an extremely low level mechanical noise to my right, which sounded like some kind of hand-operated crank at work. I whipped the right earpiece out to find out what was going on, and the sound went away.

Yes, it turned out to be part of the recording and despite having listened to this album a dozen or more times, was a part which I’d never before noticed, despite listening on some pretty high quality equipment.

For a change of pace I went back to Santana’s self-titled debut album from 1969. This has a certain raw quality to the recording the speaks of the lack of processing that was used in those days, along with the limitations of the microphones and recording equipment. And every nuance of that was conveyed, along with a very solid, very extended bass line, and drums that sounded a great deal more up to date than you’d expect from a 47 year old recording. The natural brightness of these earphones sweetened the sound a little, modernising it. When it came to the climax of “Waiting” the earphones handled the peaks with perfect confidence.

It’s a bit hard to compared the sensitivity of Sennheiser headphones with others, because the others tend to talk about output in decibels for one milliwatt of input, but Sennheiser talks about output in decibels for one volt of input (118dBSPL it says). Apple devices can typically deliver up to around one volt cleanly into headphones like this, while Android phones typically someone between a third and two thirds of that. With any of those, the headphones are going to be plenty loud enough.

I used an iPod Nano, a Windows computer, and a separate high quality portable DAC/headphone amplifier for my listening, mostly the last of those. All had plenty of grunt to make the music as intimidatingly loud as you like. And as I turned them up to as loud as I could tolerate, they took it cleanly and without distortion.

For what it’s worth, Sennheiser specifies the frequency response of the earphones as 15 to 22,000 hertz, and their impedance as 18 ohms.

It’s pretty simple: the Sennheiser Momentum In-Ear earphones are very fine sound headphones, and very practical. Do have a listen if you can swing it.

Overall
Features
Value for money
Performance
Ease of Use
Reader Rating0 Votes
Excellent sound, resistant to tangling
None. They are excellent.
4.5