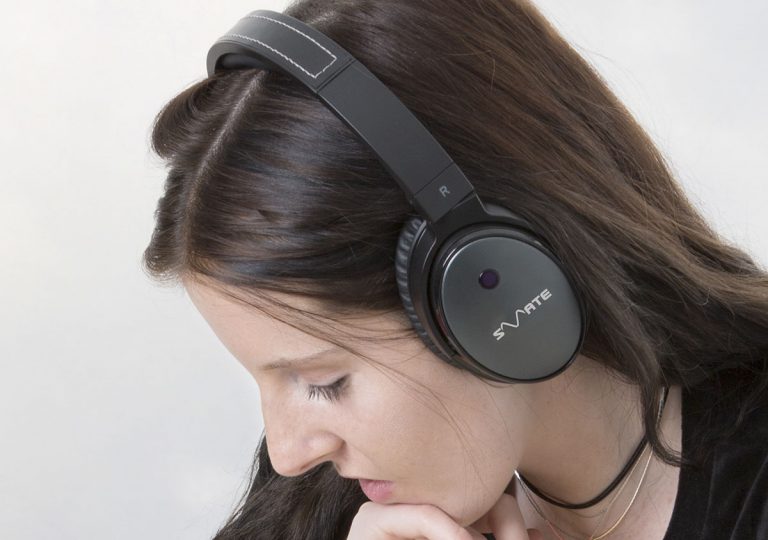 SMATE is a new online outfit supplying Australian designed consumer electronic products. So far, these include headphones, soundbars and a TV with more, we imagine, to come. We sampled the SMATE Pure Series Active Noise Cancelling Wireless headphones (model: SMPSHPNC1).

The headphones are certainly fine looking, with a black finish, soft leatherette cushions on the ear cups, a spring metal headband and deep metallic-black highlights.

They use Bluetooth and offer the convenience of NFC pairing. And, as the name suggests, they provide active noise cancellation.

Active noise cancellation works by using microphones to capture the ambient sound – or noise. They process it so that it matches the sound that will make it through the headphone ear cups, and feed it back into the actual sound produced by the headphones, but with the wave form flipped so that it cancels out that ambient sound.

In addition to that function, the SMATE headphones include Bongiovi Acoustics DPS Techology. This is a new one on me. The company Bongiovi Acoustics is based in Florida and DPS – Digital Power Station – appears to be a well developed system developed for use initially in computer systems, but since expanded to a range of audio systems. The processing algorithm employs “120 calibration points that optimizes any audio signal in real time. DPS adds depth, clarity, definition, presence and incredible stereo field imaging”.

Switching that on or off is controlled by a button on the right earcup, with it glowing blue when on and a less bright green when it’s off. Around the edge of that earcup are the volume and skip buttons, along with a “Monitor” button. This one mutes the sound and switches in the microphones (presumably the ones used for noise cancellation) so that you can hear someone speaking to you.

The volume keys are easy enough to use, and if held down for a couple of seconds they also act to skip tracks. The play/pause/phone answering/phone hanging up button is between them. It took me a bit of practice before I could confidently hit this key first time. It wasn’t well defined under my thumb.

Around the edge of the left earcup is the Micro-B USB socket for charging, a slide switch for on and off, and a 3.5mm socket for the wired connection. You can use the headphones when the battery runs down.

Speaking of which, the battery has a specified 700mAh capacity. According to the manual, that’s good for a maximum of twelve hours of operation. According to the SMATE website, it’s good for sixty hours. I’d plump for something closer to the former, but of course it’s going to depend on how you use the headphones. Bluetooth uses more than wired. I imagine the Bongiovi stuff uses some power too.

The headphones come in a nice, leather-look protective case, finished in black with grey trim around the zipper. They swivel and fold down flat, so the case is only 54mm thick, allowing it to slip into your luggage or a brief case fairly easily.

I had a nifty new Google Pixel 2 phone to get into – review coming next week – and unmetered Spotify via Optus on the SIM in that phone, so I decided to make that my music player. Pairing was a bit of a challenge to begin with because I decided to use the NFC facility.

The sensitive spot for NFC was clearly marked on the headphones. It’s on the right ear cup, slightly forward of the bottom. But how about the phone? As seems to be the practice these days, the Pixel 2 has NFC, but no clear indication of where it is within the body of the phone. But a little sliding around of the back against the headphones brought the NFC spot into alignment – it turned out to be pretty much dead centre of the phone. The phone asked for permission to connect and that was it. Fast and effective.

The headphones were comfortable to wear and had plenty of adjustment flexibility. I don’t have much hair up top, but the cushioning kept the pressure from my scalp. Importantly, the over-ear cups accommodated my ears without scrunching them up, so they remained comfortable as well.

Noise reduction can be a tricky thing to get right. SMATE gets it right. Having no flights during the review period, I fell back on the recording I took in the back seat of a modest city-to-city turbo-prop aircraft. Turning it up to an average of 100 decibels SPL, C-weighted – pretty much what you experience on this flight, in this seat, and more that you generally experience on a jet plane – the noise reduction was substantial and it made listening to music and spoken word recordings at moderate levels feasible and enjoyable.

That said, the amount of noise cancellation was less than that provided by the Bose QuietComfort 35 II headphones we checked out a few weeks ago, even at their intermediate setting.

Stopping the music, there was again that slightly eerie sensation of hearing the voices of others on the plane, now revealed from underneath the blanketing noise, without being able to quite make out what was being said.

But there was one clear problem to do with the noise reduction. Something to do with the location of the microphone, I’d guess, in the left earpiece resulted in a squeal of good old fashioned feedback when a surface was placed a few centimetres away from the cup. It was really quite loud and, figuratively, ear piercing. Unfortunately the side of my head constitutes a surface, so it would usually be triggered whenever I’d put the headphones on, until I taught myself an angle of approach that avoided that. Alternatively, you can leave them switched off until after they are on.

The sound quality was quite interesting. There were three different sound qualities. Wired and switched off, you’re just getting the native sound from the 40mm drivers in the ear cup. This was unremarkable, but quite decent. The only problem I had with it was that it would not go very loud, at least with my computer driving it.

Comparing the two active states – with and without the Bongiovi DPS engaged – was a little difficult because it was much louder with DPS working. Having it on provided an interesting openness in the sound, with bold but not excessive treble, and a slightly more forceful bass presentation. It was certainly listenable and interesting. In the end, I think I preferred having DPS off, though, because the sound was ultimately more accurate, closer to what I experience with my highest quality high fidelity headphones, and with a lively dynamic feel.

The SMATE Pure Series Active Noise Cancelling Wireless headphones are really very effective, comfortable to wear, and with the ability to be charged even while in use, are extremely practical. That feedback issue can be worked around with just a little practice, and perhaps may even be specific to the review sample.

The headphones are available direction from SMATE at its website. The normal price is $437, but they are presently on special for $349.