Review: The Smoking Gun by Breville 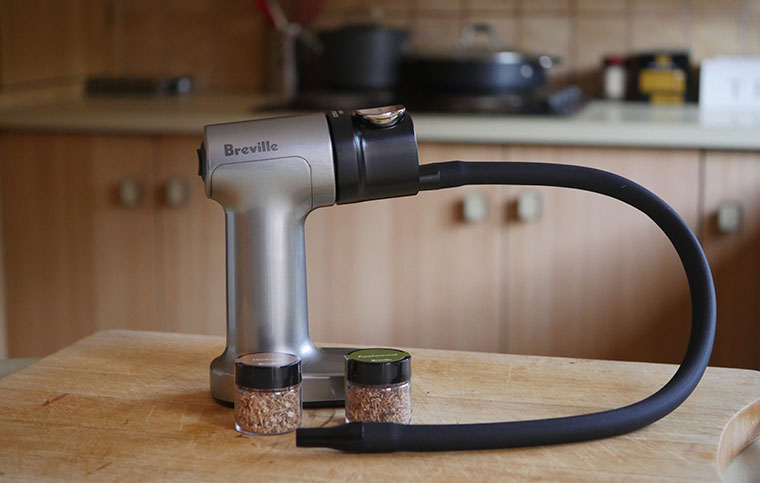 It’s time once again to deploy my mediocre cooking skills and see if some device can produce better results than I can manage. So here I present The Smoking Gun by Breville.

The Smoking Gun by Breville is neither conclusive proof of the commission of a crime, nor even a firearm of any kind. Instead it is a kitchen appliance – vaguely gun-shaped – designed to add aromatic smoke flavours into foods.

You light some woodchips in a combustion pan. They glow and the air above them is drawn down through the embers, bringing the smoke they produce with it. That’s mixed with air drawn from a bypass and then propelled down a flexible pipe. You place the nozzle of this pipe where you want the smoke to be delivered.

It comes with four “Industrial” Panasonic branded alkaline batteries in the box. Their only job is to power the motor which draws the air and smoke through the device. The separate combustion pan is metal and relatively heavy (it weighs 38 grams). It has a removable grille across the bottom to hold the wood chips and their ashes as air is drawn through them by the motor. This sort of clips into a diecast metal case that’s smoothly finished in black.

The injection pipe feels and looks like black rubber, but is silicone so it also ought to be long lasting. The pipe’s walls are fairly thin so it can bend and even fold over quite freely. It has sturdy plastic fittings at either end and is 500mm in length.

The whole thing – gun, combustion pan, rubber hose and batteries – weighs 473 grams. Take away the hose and the gun section weighs 436 grams. That weight along with the large, flat base allows it stand quite stably while you’re poking your food with the nozzle of the hose.

The switch has three positions: off, high and low. High is for drawing the air more forcefully through the combustion pan to assist ignition, while low is intended for pumping the resulting smoke into foodstuffs.

Two small jars of wood chips – the pieces are larger than saw dust, but rarely more than a millimetre in any dimension – were included, one of Hickory and the other of Applewood. You only use a pinch at a time. What’s supplied is sufficient for dozens of meals.

Nine recipe cards are provided to get you started, ranging from Smoked Maple Pecan Tart with Ricotta Cream, through the cognac and Cointreau-based cocktail Smoking in the Sidecar, to Smoked Pork Ribs with Coleslaw.

There’s not a whole lot to report, other that The Smoking Gun did its job. It was easy to use, easy to light, and copious amounts of smoke were emitted from the end of the pipe. The fact that the switches remained switched on and I didn’t need to hold the body of the device while working made it even easier.

Lighting was also easy, even with a regular lighter. The suction with the fan in the high position drew the lighter flame down into the combustion pan, instantly lighting the wood material. The main trick was remembering to quickly switch the fan to low, and drop the lighter. And to have the foodstuff to which the smoke was to be administered sitting right there ready.

Because, wow, that thing could pump out the smoke!

I applied my cooking skills to one of the recipes provided – Smoked Roasted Garlic Aioli – and thereby proved my incompetence. The mixture failed to thicken and I was left with a garlicy, oily fluid to which there was no point trying to add a smoky flavour. So instead I applied the smoke to a small bowl of mayonnaise, filling the space above it with Hickory smoke, sealing it in with Glad Wrap and then refrigerating it for a couple of hours. The result when my wife and I tasted it was a pleasant additional flavour from the smoke infusion.

One practical note: do be careful with the fine grate that goes at the bottom of the combustion pan. This is small, light, and very easy to wash down the sink. The one on the review unit came that close to disappearing into the plumbing.

Another practical note: given the extent to which I was pouring smoke into the kitchen at various points, I was expecting the kitchen smoke detector to go off. Somehow it didn’t. Perhaps there’s something in the character of the smoke that doesn’t trigger alarm detectors.

Obviously this is a highly specialised appliance. But unlike most highly specialised appliances, it is compact and will take up little cupboard space. Whether it suits you depends on whether you want to try adding more exotic flavours to your meals. While only two types of natural combustibles are provided, one could experiment with dried herbs of various kinds, along with other dried woods of different varieties.

All that is really up to the user’s imagination. The product itself does precisely what it’s supposed to do, efficiently and well.