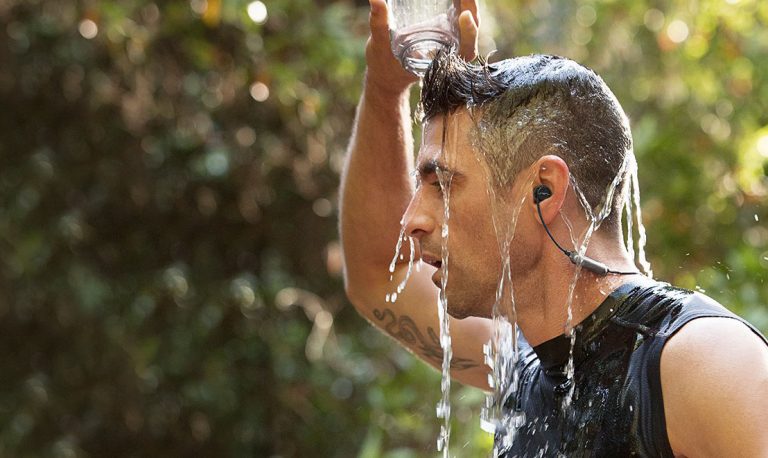 The quest continues. Will I find the magical combination of great sound, solid connectivity and convenience that I want in wireless earphones? Let’s have a go with the Sol Republic Relays Sport Wireless Bluetooth earphones

These earphones conform to the common arrangements: two earbuds connected with a bit of wire and pod or pods on the wire for controls and batteries. This model has two pods, each a few centimetres from the ear piece. The one on the right has the controls. Both, I assume, contain batteries.

Speaking of which: they are charged via a Micro-B USB socket (also on the right hand pod) and have a quick charge feature wherein ten minutes will give them an hour’s worth of playback. Fully charged, they are good for eight hours.

The earpieces themselves are very small. They have these kind of halos, or wheels-and-spokes, around their bodies, made of silicon. This apparently is supposed to help make the earphones “feel virtually weightless”. I think what makes them feel virtually weightless is that while the earphones as a whole weigh 15 grams, as near as I could tell each earpiece weighs only a gram or two.

The control pod has a multifunction button for answering and hanging up calls and pausing and playing music. In theory you can also double-tap it to fast forward. But the buttons are very heavily sprung and I was unable to make that work. It also has a separate power button.

Four sets of silicon tips are provided. None are pre-attached, but they proved easy to put on and take off. The smaller sizes I’d normally use didn’t work as well as I’d hoped because the body of the earpieces – especially that little halo – prevented them from being pushed in far enough for a solid seating. However the largest size worked well, providing a good seal and good security against become dislodged.

The Sol Republic Relays Sport Wireless earphones are available in Australia in Lemon-Lime, Grey and Mint. The review ones were the Grey models. The charge port has a plug to protect it from the elements and the earphones are rated at IPX4, which means they are immune to splashes of water, and in particular the sweat of the user.

An adjustable nubbin on the neck band allows it to be tightened. The even balance due to battery pods on both sides made it comfortable to wear, without pulling to one side or the other.

No performance specifications are provided, nor is there any mention of Bluetooth codecs so I think it’s safe to assume that neither AAC nor aptX are supported.

Talk about connection reliability, these earphones were first class. Any pocket? No problems. Not a single dropout. A cold winter’s day which leads to my hand clutching the iPod Nano? No worries. I walked around for a while with the Nano clutched between the palms of both my hands, ensuring that the 2.4GHz Bluetooth signal was weakened by passage through my flesh, and in particular the fifty percent or more water content. No problems.

I put the Nano on that special spot I use in my front yard, walked a full ten metres away and the connection remained one hundred percent reliable from every direction. I kept going. After around fifteen metres it would drop out if I turned my head so that the Nano was to my left rear. As I went further, the connection became increasingly dicky for all directions except straight ahead. I got very close to fifty metres away before that also started dropping out.

In short, the Bluetooth connectivity with the Relays Sport Wireless earphones is as good as it gets.

The earphones keep you informed of what’s going on with a male voice announcing things like power on and off.

The sound was very pushy, with a prominent upper midrange and lower treble. Used with a podcast, there was a sense of not normally present sibilance injected into the talking voices.

There are actually two modes for playback. One is apparently for outdoor use and the other is for indoors. You switch between the two by pressing the volume up and multifunction button at the same time. Which took some careful planning and concentration because the buttons are quite stiff and the shape of the shape of the pod with the controls leant it to flipping over if not perfectly balanced. I usually used my left hand to hold it steady.

It wasn’t clear which mode is for which. But when I switched from the start up mode to the alternative one, the treble prominence was reigned in noticeably (and the whole thing got louder as well). It was still very bright, but less than previously.

In fact, with some music it lifted the performance. The opening strains of Deep Purple’s “Smoke on the Water” were more open and airy and pleasing than usual. But once the snare drum kicked in – the boost seemed to really push that – the sense of excessive brightness returned and I had to turn the level down a notch to avoid my ears being overloaded by the drum.

That said, at that slightly lower level, the punchiness of the whole drum kit – especially on “Space Trucking’” – was impressive and brought out aspects of it I hadn’t previously noticed. Nonetheless, because of the prominent treble, the bass seemed somewhat recessed.

With 1980s music – for example, The Motels – the tonal balance of the time was towards brightness and the emphasis of the treble with these earphones was a touch unfortunate.

Now I’ve been doing this for a long time so I’m pretty confident about my judgements on this. Yet everywhere I look I’m reading reviews of the Sol Republic Relays Sport Wireless earphones which don’t note the same things at all. Not just customer reviews, but reviews from people who do the same work I do. So, is it me? I had a similar problem with the tone of the Sol Republic Amps Air wireless earbuds. Maybe I’m particularly sensitive to that frequency range.

I’d suggest having a listen for yourself, except that’s difficult with in-ear devices.

The earphones certain went very loud, so there were no real limitations on that front.

If you’re not super particular about how things sound, but do like earphones that provide a supremely reliable Bluetooth connection, give these ones a go.