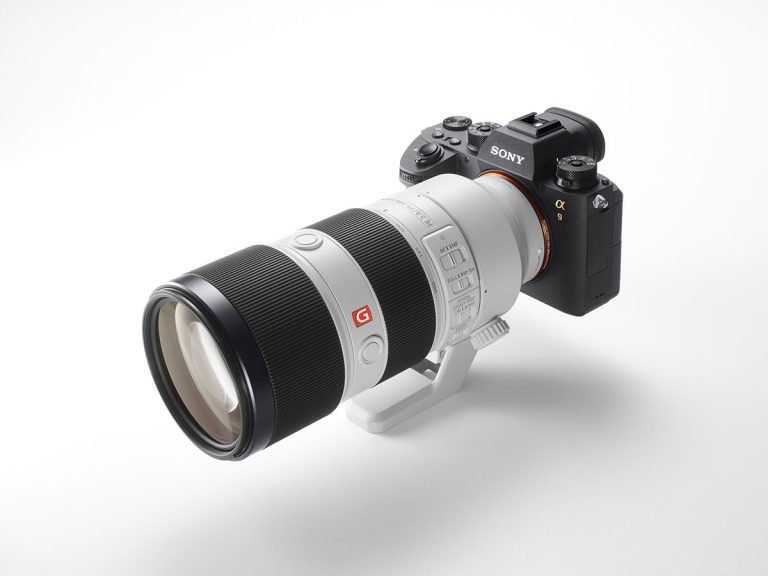 When I was offered the opportunity to review the Sony α9 Full Frame Mirrorless Camera, I of course jumped at it. But, I said, I don’t have a Sony-compatible lens. Please make sure you put one of those in.

They did. It was not quite the lens I expected. But, oh, wow!

Let’s get one thing clear first. When I reviewed the Epson SureColor P5070 printer a while back, I noted that “If you’re the kind of person who’ll spend $5000 on a camera, $3000 on a printer doesn’t sound unreasonable.”

That’s what you pay for quality. Enormous quality.

Let’s look at a some terms in those product names. “Full Frame”. That means that the 24.2 megapixel stacked CMOS sensor is roughly the same size as a 35mm film frame. No need to convert any lens specifications to “35mm equivalency”. They already are. So the 70-200mm of the lens is a range that long-term photographers will intuitively grasp. Not super telephoto, but a good range.

What is super is the maximum aperture. The lens is astonishingly fast, at f/2.8 across its entire range. With my own camera the fastest, regular focal length prime lenses tend to be f/2.8 and the telephotos range from f/4.5 to f/5.6 across their range. Might not seem like much of a difference, but all else being equal, an f/2.8 aperture lets in four times as much light as an f/5.6 aperture.

With the excellent optical image stabilisation of the system, I ended up taking most of my photos hand held, using the tripod only for some night shots of the moon.

At the heart of the Sony α9 is the 24.2 megapixel stack CMOS sensor. The idea here is that the sensing panel has all the electronics bonded directly to it for extremely fast reads. There’s DRAM bonded to the back of all that to hold the data, rather than it having to be piped off elsewhere in the camera.

For such a large sensor, the camera itself is surprisingly small. It sat very nicely in my hand, and would have sat even more nicely with a shorter, lighter lens. With the battery in place it weighs only 673 grams. The lens weighs a touch over 1.5 kilograms.

It measures only 96mm tall, 127mm wide and 63mm deep (without a lens, obviously). It uses the Sony E-mount for lenses, but with an adaptor A-mount lenses can also be used, with auto focus and auto exposure support.

The viewfinder at the eyepiece uses OLED. The 1.44 megapixel rear display – it folds out to allow above and below viewing – can also be used for framing. There’s five axis image stabilisation. Sony reckons it’s good for up to five stops of slower shutter speed in its effect.

The battery is sufficient, says Sony, for up to 480 stills on a charge. (There’s an optional grip to increase that further.) Two memory card slots are provided, for SDXC or Memory Stick. One of them supports UHS-II cards for super fast file transfers.

Video up to UltraHD at 30 frames per second and 100Mbps is supported, and up to 120fps is possible at full HD for slow motion recording. But I have the slight sense that the video side of things is in this camera simply because they could. It’s really about shooting stills. The standard image is in 3:2 aspect – 6000 by 4000 pixels. A range of lesser resolutions are available, including some in 16:9 aspect. In addition to different levels of JPEG compression, you can choose up to 14 bit RAW for the saving format. That ought to give Photoshop every possible skerrick of data in the image.

All the normal features of a camera are of course built in. There’s a dedicated ±3EV dial for exposure compensation. The mechanical shutter runs from 30 seconds to 1/8000th of a second. And of course, there’s also a Bulb setting. The electronic shutter can go up to 1/32,000th of a second.

Continuous shooting of up to 20 frames per second is possible with the electronic shutter, and 5 frames per second with the mechanical one. The drive dial has three preset frame rates for low, medium and high, so you can rapidly choose how fast you want it to go. A 693 point phase detection auto focus system is used. Manual focus is assisted by a viewfinder zoom and peak focus highlighting.

I sometimes suffer lens envy. The glass in my camera’s lenses is generally very nice, but certainly the telephoto one looks kind of plasticky. Anyone wielding this camera with the Sony FE 70-200mm F2.8 GM OSS zoom telephoto lens affixed will be able to hold up their head with pride, even amongst other pros. To start with, it’s very solid, as the 1.5 kilogram weight attests. The chunk of glass at the objective end is huge. It takes a 77mm filter.

The lens is fixed length – all the moving of parts happens internally. The iris has eleven blades for super smooth bokeh. There are convenient and easy to operate switches on the side for auto/manual focus and optical image stabilisation, along with two separate OIS modes.

It comes with a tripod mount, easily removable, with two mounting points to allow for different camera weights. It also comes with a hood.

And, of course, and very importantly, it is light grey, so it looks the part.

Initially I thought that having only this lens would be limiting. And I guess it is. You can’t get closer than a metre. And it is very heavy.

But I accepted the limitations and looked for opportunities instead. The first thing to note is that, like a quality music instrument, this camera and lens are easier to use than a cheap one. Oh, don’t get me wrong. If you want to you can dive into the rabbit burrow of settings upon settings to tweak things just the way you like them. But the defaults are pretty reasonable. And taking photos can in many cases be as simple as pointing and shooting.

The auto focus was fast, and very accurate. But the ease of switching to manual focus, thanks to the switch on the barrel of the lens, was so inviting. Those damned birds had the habit of sitting in trees with twigs between me and them. Often the camera would focus on the main game, but when it wouldn’t, the smooth focus ring allowed rapid acquisition.

With that shot I want to point out something: I have cropped this down to a small portion of the frame. Yet the resolving power of the lens and camera lets this bird look as sharp and detailed as if it were occupying the full frame. And with the manual focus, the camera was able to get past that inconvenient twig.

The f/2.8 lens meant that as evening was threatening on a winter Canberra evening, I could still catch a Kanga in the semi-wild space between suburbs.

There is no macro function on a lens like this. But who needs it? Just wind the lens up to 200mm and stay at least a metre away, and the effect is close enough.

Some more birds. The colourful varieties seem particularly common this year. Again, heavily cropped. This is the resolving power of the lens and camera at work, despite being hand held.

Finally, I had to pull out the tripod to get the moon. I switched the white balance from auto to sunlight in order to get a sense of the colour the moon was presenting that evening. The exposure was manual because no exposure compensation dial goes far enough for this kind of shot. I had to wind exposure way, way down.

Overall
Features
Value for money
Performance
Ease of Use
Design
Reader Rating0 Votes
Glorious photos, easy to use
Quite the price
4.7