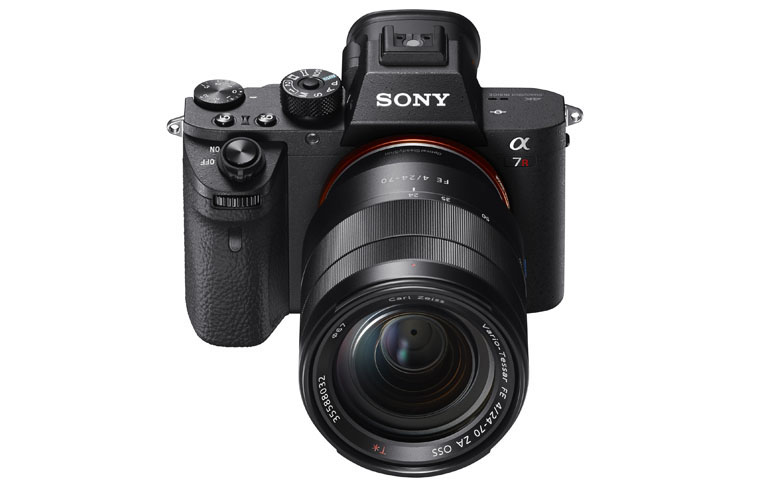 Well, this camera is really called the Sony α7R II, but just in case the α (“alpha” symbol) doesn’t render well with some browsers, we’ll stick with Sony Alpha 7R II. This is a fascinating camera, combining high end features into a form rarely seen.

In summary, I’d call the Sony Alpha 7R II a compact form, mirrorless, full frame, interchangeable lens, digital camera. Some of those characteristics are unusual when combined with the others. In particular: “full frame” doesn’t normally go with “compact”.

Full frame means that the sensor, the electronic film if you like, is the same size as the frame of film used in an old 35mm single lens reflex film camera. That makes it 35.9mm wide by 24mm tall. A big frame means a lot of real estate to populate with pixels. Sony has plastered an effective 42.4 million pixels on this one. For those who’d prefer to think linearly, that makes for maximum size shots of 7952 by 5304 pixels.

Sony uses CMOS sensors, branded “Exmor” and in this camera it uses what it says is “the world’s first 35mm full-frame CMOS image sensor with back-illuminated structure”.

Back illuminated? Sounds like they’ve put a little LED back there behind the sensor to glow on it. Which of course makes no sense.

In fact, “back illuminated” in this context means that the active element of the sensor has been flipped front to back, so that the “photocathode” layer is at the front, just behind the colour filters. So the “back” of the sensor is “illuminated” by the light from the lens because it is now at the front. That allows the wiring that connects all those pixels, plus the other silicon that supports the operation of the sensor, to be behind the sensitive layer with respect to the lens, instead of in front of it. Most of the light could still get through all that stuff, particularly when the pixels were large (as they tended to be in full frame digital cameras). But more can get through with the new arrangement.

The kind of figures bandied around – not necessarily by Sony – are an increase from 60% to 90% effective.

Um, why? Or, rather, why now and not fifteen years ago?

Because pixel size mattered for the efficiency of light transmission, it wasn’t a problem with the large pixels on full frame cameras. But when you pack over forty million of them in there, the pixels are starting to get quite small, so the back illumination becomes more important.

One of the startling things about this camera is how very close the sensor is to the E-mount for the lens. Of course, being mirrorless there’s nothing standing in the way so some care is required. I’d guess that the body of the camera is about as small and light as can be managed with a full size sensor. The body is 127 mm wide, 96mm tall and a hair over 60 mm deep. With battery, it weighs
625 grams. It is solidly built with a magnesium alloy frame.

But how big and heavy it will be in practice depends on the lens you use. Sony provided an interesting f/4 24 to 70mm Carl Zeiss Vario-Tessar zoom lens to help with the review. Just as well, since I don’t happen to have a collection of E-mount lenses to hand. With this camera a 24 to 70mm zoom is equivalent to, in 35mm film camera terms, a 24 to 70mm zoom. No mental conversions required when you’re using a full frame camera. That’s just a bit short of a 3x zoom (2.92x to be more precise). This lens costs $1599, so all together the cost of the camera as tested was $6098.

The camera has “five axis” image stabilisation (that is, x, y and z dimension shake, plus two axes of rotation). It has a silent (ie. electronic shutter) mode in addition to the traditional mechanical shutter. Options from automatic everything through to manual everything are readily available. The manual focus includes auto zoom during the focus operation (along with image stabilisation which holds the things you’re trying to focus on relatively steady in the viewfinder) and zebra patterns to highlight focus if you wish. A lens ring is used for focus.

There’s auto exposure bracketing with options for the number and size of steps. Exposure compensation is managed via a manual dial on the top of the camera (which was perhaps a touch too easy to inadvertently nudge). Dials for adjusting shutter speed and aperture are well placed for thumb and forefinger. The shooting mode dial has a button in the middle to release a lock. As far as I could work out, it was always locked except when held down, and I found it irritating in use. There is no built in flash. If you want to get full super manual, the latest firmware allows 14 bit RAW photos, for an unimaginable number of colours (mathematically: 44 trillion).

The 75mm LCD screen was on a hinged bracket that allowed it to be swung out to a horizontal position for viewing from above, or tilted downwards at close to 45 degrees to facilitate taking shots from up high with outstretched arms. But it won’t swing around to selfie angles, nor was it a touch screen so you cannot perform touch-to-focus manoeuvres.

The rechargeable battery is rated to provide sufficient power for 290 pictures when the viewfinder is used for framing, or 340 pictures when using the LCD display. From which I can deduce that somehow the viewfinder – which uses OLED technology in XGA (1024 by 768 pixels) – consumes more power than the rear display.

Finally, as you’d expect in modern premium camera, a network function is implemented so that you can control the camera from a distance with a smart phone and wirelessly transfer photos to other devices.

This camera was a real pleasure to use. The electronic viewfinder was at least as clear as an optical one, and with the focus assist facilities was very effective when going fully manual. The viewfinder was capable of going bright, but perhaps a little surprisingly there wasn’t an ‘Auto’ brightness mode available to boost its brightness when outdoors.

But all the good stuff wasn’t good so much as great. The autofocus was fast. A helicopter flew overhead and even though the lens didn’t offer much zoom, the camera focused about as quickly as I could press the shutter. In fact, I’m so used to pausing at half press to allow a half-second for focus, I was kicking myself on the first shot because I pressed too hard and went straight through to completion. But that shot turned out at least as good as the more measured next shot. By the third shot, the copter was gone behind some bushes. Speed counts

Indoors and out the fully auto shots were judicious in their tonal and colour balance, and again were fast. Low light images in auto mode pushed the ISO to 6400, but still the dark areas of the picture were clean and noise free. There’s an auto HDR mode which grabbed three or four (it sounded like the latter) frames and merged them in camera. This was effective in extreme cases for pulling down the brightness of the sky to allow it to be blue above a regularly coloured subject. Tripod needed of course. The camera seemed to take about five seconds to do the processing.

I guess I didn’t enjoy the sense of compactness available from the camera in large part because the lens made for a pretty hefty, chunky bit of glass. And, indeed, while Sony can manage a smaller body, a larger sensor does make for longer lenses to achieve the same 35mm-equivalent telephoto as that needed for cameras with smaller sensors.

Dragging the photos into a computer via a direct connection to the camera’s MicroUSB port moved them at around 20 to 22 megabytes per second. I was using a UHS Class 3 card, so that wasn’t the bottleneck. For a 226 file photo dump, that took just under two minutes. Not too bad. However it was worth popping out the card and using a Lexar SR2 Professional SD card reader. That allowed the files to transfer at better than 75 megabytes per second for a 36 second transfer.

(The card I was using was a UHS-I SDXC card. With a nice new Lexar Professional 2000x UHS-II card, the speed was around 150MB/s and less than twenty seconds for the 226 photo transfer. Get a quality high speed card and reader!)

As always, there’s a trade-off between the different virtues of one camera versus another, and while the body of the Sony Alpha 7R II camera may be compact, its lenses won’t be. So consider this the camera to buy not so much if you want compact, but if you want extremely high quality, combined with excellent ease of use.