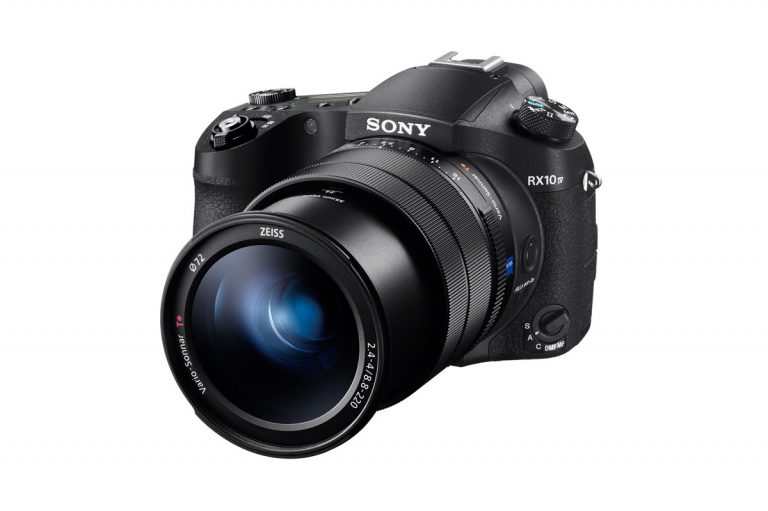 There are many things to weigh up in purchasing a camera. Price is a biggie, of course. But there’s also compactness, picture quality, versatility, and convenience. If you want the best quality and to heck with the rest, then you’ll be choosing a DSLR along with a bunch of lenses. But what if quality and convenience and versatility are your priorities, and you’re not so concerned about the rest?

Then you’ll likely want a fixed lens camera, but one with quite a zoom. A compact camera? No, quality suffers, and the lens is probably slow. Which brings us to the Sony CyberShot RX10 IV camera (model number DSC-RX10M4). This is the fourth version of the RX10, as the Roman numerals suggest, and it seems to be targeted very much at someone who wants a quality picture, with control and versatility, but without the hassle of lens changes.

The RX10 IV is fairly large, challenging the size of many a changeable lens mirrorless camera. Indeed, with its substantial fixed lens, it isn’t the kind of camera to hang flat against your side when suspended from your shoulder with its strap. It weighs nearly 1.1 kilograms and, switched off (so that the lens is retracted) measures 144mm front to back, 142mm side to side and 96mm top to bottom.

But what you get is a wide range of zoom from a fast lens, a high quality 20.1 megapixel Exmor RS CMOS-stacked sensor, Sony’s BIONZ X image processing, and a stack of manual controls to supplement the highly developed auto features.

First the lens. It has a 25x zoom range, from 8.8 to 220mm. That works out to be 24 to 600mm, 35mm equivalent. That’s not too unusual these days, except that the lens – a ZEISS Vario-Sonnar T – has a maximum aperture of between f/2.4 and f/4.0. Combine that with Sony’s “Optical SteadyShot” – its version of optical image stabilisation – which Sony says is good for around 4.5 stops of “shutter speed improvement”, and you’ll find it possible to use this camera hand held for long shots that could not be managed with most super telephoto compact models.

The lens has the focal length – in 35mm equivalent terms – marked on its barrel so you have a quick visual indication from the outside. It accepts 72mm optical filters.

Sony says that the auto focus has a 0.03 second response time and that it uses 315 focal-plane phase-detection points. Continuous shooting with auto focus can proceed at 24 frames per second. The camera will also do up to 4K video at bitrates of up to 100Mbps. And slow motion with high frame rate shooting.

The rear display is not touch sensitive. It has 1.44 megapixels and a 75mm diagonal. It can fold out so you can use it from above and below, but it doesn’t swing side to side, nor all the way around to allow you to frame selfies. The electronic optical viewfinder has nearly 2.4 megapixels and dioptre adjustment so those of us with imperfect vision can use it. The screen was fairly visible under most lighting conditions, but having the viewfinder both makes sure that even under the brightest light you’ll be able to frame things properly. Furthermore, I always find that pushing the camera into your eye makes for a more stable hold when taking telephoto shots.

There is a tripod mounting point on the bottom, but I didn’t actually use it during the test. I do like OIS and fast lenses. On top there’s a pop up flash, but also a proper flash (and accessories) mounting shoe. A top-mounted LCD display shows a few basic settings, the number of shots remaining on your card and the battery status. The movie button is distinct from everything else and able to be reached by the right thumb for activation even while you’re framing through the viewfinder.

The camera works with SD cards and Memory Stick Duo media. If you’re going for that 100Mbps video recording, you’ll need SDHC or SDXC with a speed rating of U3. Apparently Memory Sticks aren’t fast enough.

There’s a microphone input and headphone output, along with a “multi” output for use with HDMI. The battery is charged in situ via a Micro-B USB socket. A 1.5 amp, 5 volt adaptor is provided with the camera. This will not run the camera from power. For that you need a separate adaptor that goes into the battery compartment.

In addition the camera has 802.11b/g/n WiFi, running in the 2.4GHz band, along with Bluetooth and NFC for easy pairing. You can use an app for extracting photos from the camera to your phone for easy sharing on the fly. It will also allow GPS and time data to be taken from your phone and included in the photo metadata on the camera.

As I’ve indicated, the focus (ahem) of the Sony RX10 IV is on convenience and performance, not size and compactness. So I did tend to find it a bit lumpy carrying around. But that’s about the only significant drawback. And it was far less lumpy than my usual camera, and far more responsive than that camera, given the need for changes between my three main lenses.

In many circumstances you’re going to get ideal results just from pointing and shooting. In general it would take a second or so from switch on to being ready to take a photo, starting up in wide angle mode. Getting it out to the full 600mm equivalent would generally take a couple more seconds.

Amongst the other convenient controls for those who want to go beyond auto everything was the good sized exposure compensation dial, which is calibrated to plus or minus three f stops. Getting shots of a dark bird on a power line against a bright blue sky was just a matter of turning this dial a few clicks with my thumb to reveal the bird’s near-side detail. Just as useful was a focus switch, located on the front left of the camera body. This has several settings to control auto focus mode, but the important ones were at opposite ends of its travel: full auto focus and full manual focus. It took little effort to spin this around to manual to get those shots where auto focus inevitably fails.

What, auto focus isn’t perfect? Of course not. A bird lurking in the tree branches is always a challenge. The auto focus is as likely, or even more likely, to latch onto the branches rather than the bird.

Despite the zoom ring around the lens, it isn’t manual. Indeed, if you spin the ring quickly the zoom changes faster. I soon settled on a highly effective way of zooming. I used the lever around the shutter release to get near the framing I wanted, and then slowly turned the lens ring to make fine adjustments.

I spent a bit of time with the camera in full AUTO mode. That is, not only was focus and exposure automatic, but the camera would make decisions about the kind of scene it was looking at and use that to inform the settings. In the end I abandoned it over just one incident. There was a piece of rubbish discarded over the fork in a tree. It looked rather like an artificial snake and was surprisingly photogenic, so I pointed and tried to shoot, but the picture went blurry as I half-pressed the shutter release. That was weird. I pointed the camera at the base of the tree and it focused perfectly. I moved the point of aim back to the subject … and it went blurry. Repeatedly. I was about to switch to manual focus when it occurred to me that I ought to change the shooting mode. I clicked over to “P” (Program) instead of “AUTO” and the auto focus was suddenly sure, capturing a sharp image. “AUTO”, though, is good for things it can identify, like faces and buildings and such.

That quirk aside, the camera was a delight to use. There were few things that it didn’t capture well. I think I would have liked a real macro mode, but that no doubt would have compromised other aspects of performance. As it is, to kind of fake macro you just go as close as you can at maximum zoom (around 0.92 metres). This works if you’re steady enough. But being steady enough is quite the ask with this level of magnification. I’d strongly recommend a tripod if possible. I managed a couple of reasonable shots hand held under full sunlight.

I’d suggest trying the camera on your shoulder, and if you’re happy with the bulk, and the rather high price, then you’ll be ready to buy an otherwise first class travel camera. The Sony CyberShot RX-10 IV is wide enough to grab photos of buildings, yet zoom in on far details.