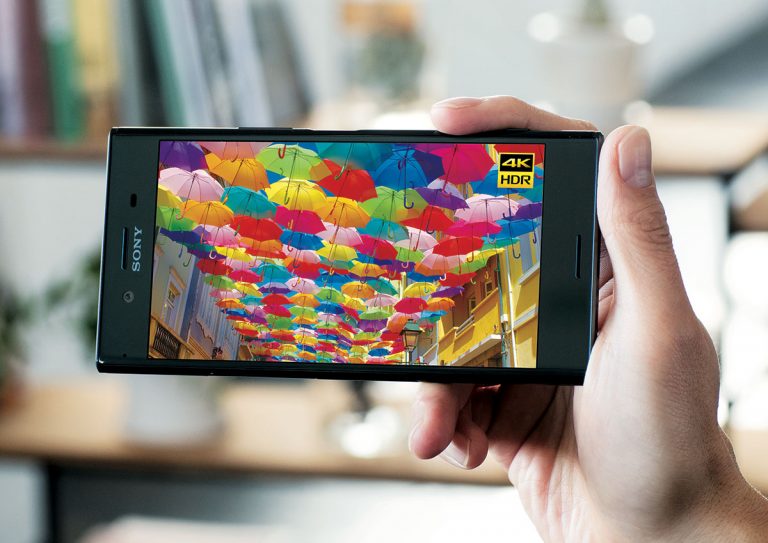 Sometimes discussions about great mobile phones devolve the Samsung vs Apple battle. Which is kind of unfair in light of other brands which offer models just about as good, often at lower prices. I have a real soft spot for the Sony Xperia range, largely because I love the bold styling. And as I discovered some months ago, its $999 premium model, the Sony Xperia XZ, was pretty much a match for the others.

But that phone is no longer the premium model. The new premium model is the Sony Xperia XZ Premium. No mistaking its position in the lineup then.

The first thing that makes the phone stand out as a premium model is the display. This is 5.5 inches and with a frankly astonishing resolution of 4K. More specifically, 2160 by 3840 pixels, which is technically Ultra High Definition rather than 4K. Either way, that’s a big step up in resolution. Peering carefully though my reading glasses and a big magnifying glass, black text on white still continued to look like super smooth high resolution print on paper. Only by using a jeweller’s loupe could I (barely) make out the pixels.

It doesn’t matter in the slightest, but the pixel density of this phone is 801ppi, compared to 570ppi for the new Samsung Galaxy S8 and 401ppi for the iPhone 7 Plus.

The display also supports high dynamic range images and uses some of Sony’s TV picture processing to improve the colours and so forth.

Covering the display – and the rear of the phone as well – is Corning Gorilla Glass 5. The phone is IP65/68 rated, which means dust proof and safe against water jets and immersion into water more than a metre deep. All that is, of course, for safety and security in case things go wrong, not an invitation to take it swimming. As Sony says in its web page footnote, “You should not put the device completely underwater; or expose it to seawater, salt water, chlorinated water or liquids such as drinks.” That’s good advice for all phones.

The Sony Xperia XZ phone keeps with the uncompromisingly rectangular lines of many of Sony’s recent models. Its left and right edges are rounded, allowing it to be picked up easily (and in any case, it’ll likely end up in a case, as most phones are). I guess whether you like the styling is all a matter of taste. I glanced at another review where they clearly hated it. I really like the simplicity. Each to their own.

Inside it runs a Qualcomm Snapdragon 835, which is about as fast as things get. It has eight cores, four running at up to 2.45GHz and the other four 1.9GHz. It supports Cat 16 LTD downloads of up to one gigabit per second and Cat 13 uploads of up to 150Mbps.

As always, those figures depend on the phone actually implementing the full functionality, there being locations where the cell towers also support that functionality, and the load on them. This phone has these features implemented. Telstra – you can get the phone from Telstra on a plan – has Gigabit LTE available in a small areas in the centre of Sydney, Melbourne and Brisbane. Sony says that “Typical speeds for Gigabit capable devices are in the range of 5 to 300 Mbps in 4GX areas”.

The processor has 4GB of working RAM, while the phone packs 64GB of storage (using the new high speed Universal Flash Storage specification).

The camera backs off on the resolution a little from the non-premium XZ, down to 19 megapixels maximum (although it starts in a 17MP 16:9 mode). A 1/2.3 inch Exmor RS sensor is used. Amongst the features are five axis image stabilisation, Sony’s f/2.0 G lens, predictive hybrid autofocus, 4K video and a super slow motion video mode with 960 frames per second shooting. There’s also a dedicated camera button which starts the camera from standby, and acts as the shutter button. When the phone is held in landscape position, the button is located in the place where you’d find the shutter release on a camera.

The front camera is a 13MP f/2.0 unit, also with optical image stabilisation.

Connectivity and charging is via a USB Type-C port, which supports USB 3.1. The WiFi is dual band 802.11ac. Miracast and Google Cast is available. The Bluetooth is version 5.0 and there’s near field communications. Sony has included support for LDAC, its high quality audio codec for Bluetooth, but of course you’ll need a Sony speaker or device which also supports it for playback.

The battery has a capacity of 3230mAh and supports Qualcomm Quick Charge 3.0 for fast charging.

I’ve become so used to the standard card tray for SIMs and memory cards that I donned my reading glasses and rotated the phone three times before realising that there was no pin-hole into which to insert a tray popper. Instead, the memory card tray was removed simply by putting a thumbnail into a depression under what I thought was the volume rocker. It turns out to be a cover for the card slots. Out slid the tray, but where to put the SIM? There was another tray under the cover, which had to be pulled out using the careful application of fingernails. I guess that’s how it is supposed to go. It seemed like sloppy design, but in the end it worked, so I can’t complain too much.

The phone came pre-used, booting straight into Android, unlocked. I did a factory reset to ensure I was getting the out-of-the-box experience. That started the usual “Get Started” process which invited me to first choose a WiFi access point and then choose unlocking method (I went fingerprint and PIN). The fingerprint scanner is on the power button on the right.

To transfer from a Samsung phone then just took a moment pressing the back of the Samsung against the Sony, which was instantly acknowledged, “Okaying” and “Yes-ing” my way through a few items, and the letting the phone be while it started downloading and installing my usual apps. That took a little while since at the same time it was downloading a 134MB system update.

The Android Nougat 7.1 implementation is not going to offer surprises to anyone. There are slight differences to plain Android, but only around the edges.

This phone is fast. Fast in everything according the Basemark OS II bench test. The overall result was 3540 (compare: Huawei P10, 2679; HTC U11, 3212; Samsung Galaxy S7, 2816). Running the gaming Basemark X test, the graphics were silky smooth as they scrolled and floated around the screen, which is quite the feat given that this phone is shuffling eight million pixels around. It scored 44518, very slightly under the HTC U11’s 44721.

In practice, it was as fast as those numbers suggest. There was never any hesitation with any app.  Indeed, everything in my standard collection of apps worked as it should.

The camera picture quality was generally very good indeed, with lovely colour and good, but not excessive sharpness when viewed at normal sizes. Zooming in on the resulting pictures revealed, even on a bright day, more noise than I would have expected, and not too much artificial sharpening. But in some shots there seemed to be noticeable JPEG compression noise around sharp, high contrast edges. Night shots still managed a good focus but were fairly noisy, and what looked to be that compression noise was quite extensive in these shots.

The camera app was bit of a strange beast. Things like Panorama, and 4K and slow motion video were kind of bolted on, like plug ins. When I went to take a Panorama shot – good news, it now does the whole stitching thing, allowing twenty thousand pixel wide Panoramas – from within the camera app, I had to give it its own permission to access the camera, along with some other things.

HDR is available, but only in manual mode it seems, and must be manually switched on or off, there being no auto settings.

There was no RAW mode.

I was half expecting the super slow motion to fall back to something like VGA resolution, given the 960 frames per second. In fact, it managed 720p, or 1280 by 720 pixels. Definitely not feature film level, but providing reasonable detail, and rather useful for closely examining things that normally happen a bit too quickly to fully grasp.

The Sony Xperia XZ Premium is a fine phone, with a camera which falls just short of the top tier, but absolutely first class overall performance, and display resolution that no one else yet matches.