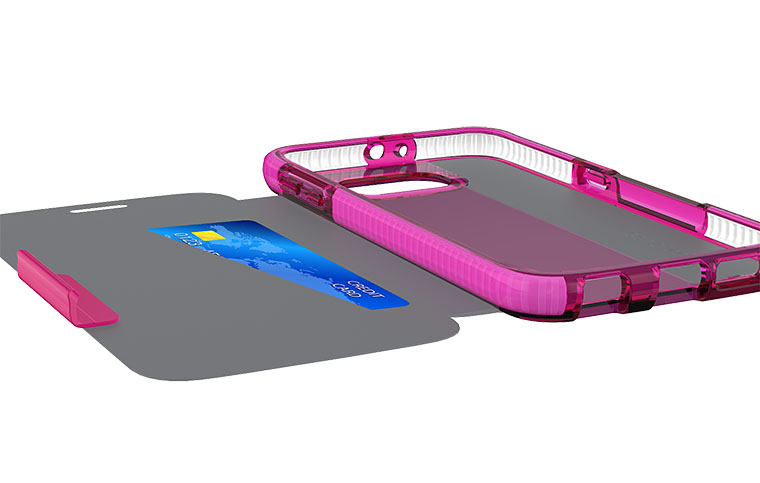 I am really quite ambivalent about phone cases. Thanks in large part to the late Mr Jobs, what is clearly the most utilitarian of devices – it’s just a phone and data gadget, after all – modern phones are actually things of beauty. And I’m not just speaking of iPhones. And I’m not just speaking of premium models. Even many mid-priced phones look just as good as the most expensive of models.

Their glass or anodised metal cases or gorgeous. Their lines are so slim as to visually defy the capabilities they pack within them. So why would you want to cover all that up?

Well, I for one want my phone to last for a couple of years and for it to do that, I have to avoid smashing it. Long experience has convinced me that I need help in that department. I can maintain a high level of care for a few hours, even a day or two, but soon enough my phone handling will become routine, and then it’s only a matter of time until it squeezes itself out of my grasp as I’m climbing out of the car, or grabbing for it when it’s ringing.

And so, reluctantly, I have to hide this beautiful thing with a case.

But what case? Just edge protection or the full thing? When I purchased a Samsung Galaxy S6 earlier this year (in full knowledge the 7 was around the corner – I was thus able to save a couple of hundred dollars) I compromised and bought a silicon case which covered the sides and back in the hope that the Gorilla Glass 4 over the screen would protect the front. So far it hasn’t really been put to the test. But it does worry me.

So what about a full covering of some sort. There are so many to choose from, but Tech 21 happened to send me a press release at the right time.

Its full cover case is called the Evo Wallet case. The one for my S6 costs $44.95, but there are models for iPhones at the same price for the 6 and 6s, and several other popular phone models, and slightly redesigned ones for the iPhone 7 and 7 Plus, the Samsung Galaxy S7 and S7 Edge, and even for the Samsung Galaxy Note7, along with other brands. For some of these the prices are closer to $60.

At first glance, it seems ever so simple. The main body is just like any old back and sides protector. You catch a corner of your phone under the lip and then work it in. The flexible case then holds the phone securely. If you have a look before slipping it in, you’ll see that there are ribs on the inside of the edges to improve impact protection at the corners.
There are generous cut-outs on the back for the camera lens and flash, on the bottom for the ports and speaker, and the top for the microphone and IR transmitter. There’s plenty of room for just about any 3.5mm headphone plug or Micro-B USB plug, so you needn’t shy away from using premium cables with this case.

The power and volume keys are concealed under the case, with thickened sections standing out a little so they can still be operated when it’s closed.

The top just folds over, hinged to the left of the phone. A stiff plastic clasp holds it closed quite firmly. At first it was tight enough to require a bit of fingernail action to open it up, but it had worn in within a couple of hours and was easy to open.

When closed, the only opening on the face cover was for the phone speaker at the top.

The Evo Wallet is finished on the outside with a texture that makes it feel natural rather than synthetic (even though it seems to be made from some kind of silicon or plastic). The inside has what Tech21 calls a “soft microfiber lining”.

Inside the front cover is a slit to hold a credit card. Hmmm, the idea of keeping two valuable items together worries me a little, but you don’t have to use it.

The rear of the case features a lengthwise hinge so that you can use the case as a stand.

I like the clasp. I can imagine an unsecured cover flapping open as the phone falls towards the concrete. I’m pretty sure that won’t happen with this cover. Tech21 says that the case should protect the phone from a fall of two metres. It looks a lot like it might.

It’s also about as thin and, if I can invent a word, uncumbersome as a full coverage case can be. It didn’t look like it added much to the phone’s thickness, which is why you can’t trust impressions. Most of an S6 is 6.8mm thick. According to my Vernier callipers, the phone in case was a touch over 13mm, depending on how tight you want to tighten the callipers. Still, it slipped into the pocket fine.

The only real complaint I had was that I would have liked one more hole: right over the notification light near the top of the phone. The problem with a case that covers the front is that you can’t see when the phone wants your attention. Such a hole would ease the problem.

That aside, the Tech21 Evo Wallet does provide excellent protection and engenders a sense of confidence. And actually costs less than the mere sides-and-back case I first bought.