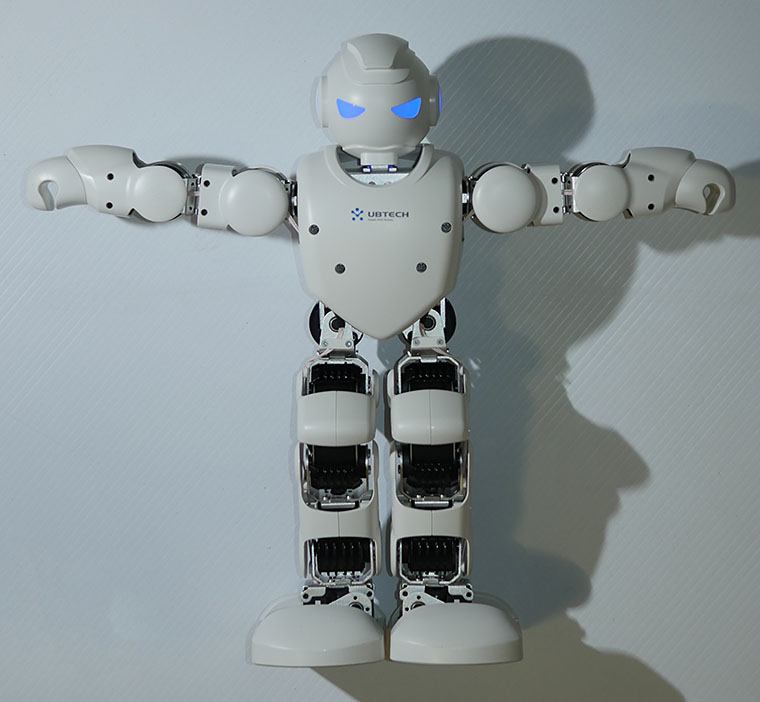 Some futurists fear the singularity – the moment at which artificial intelligence reaches such a point of advancement it can improve its own design, advancing at a supercharged rate well beyond the ken, let alone control, of humans. So perhaps it’s time to start familiarising ourselves with our future robotic overlords.

In that spirit, I introduce to you the UBTech Robots Corporation Alpha 1 Pro robot.

Is it a robot? What is a robot? Let me describe and you can decide.

The Alpha 1 Pro is a “humanoid” style robot standing just short of 400mm tall. Much of it is encased in white plastic and it features various LEDs around its body which can light up in different colours, while its “eyes” and “ears” can glow blue.

Its joints are exposed in order to give it the specified sixteen degrees of freedom. That means it has lots of servo motor in its arms and legs. In each arm there is a rotator at the shoulder, plus an up and down servo at the should and elbow. That provides sufficient freedom of movement to give life-like arm movements … except that it can be creepier because the elbow can bend backwards.

There are two servos for each side at the hips: one for sideways movement, one for to and fro. The knees are two and fro only while the feet can be driven both to and fro and sideways. If you’ve been counting, that makes up the sixteen.

That permits sufficient freedom of movement for the unit to walk forwards or backwards, turn to the left or right, stand on one foot, kick and punch and dance. A lot of the available functions are dances that last a few minutes. To that end, it also has a built in speaker with three watts of power for producing music.

On its back is a fairly hefty battery pack which is rated at providing better than sixty minutes run time. On the top of the battery pack (which is apparently replaceable) is the power button, the power input (a small wall transformer provides the power for charging) and a MiniUSB socket for connecting to a computer. There’s also a red emergency stop button, which of course is something that science fiction movie viewers know must be fitted to all robots, lest disaster ensue.

The main connection you will use is Bluetooth.

The UBTech Alpha 1 Pro, perhaps a little surprisingly, is floppy until you switch it on. When on it stands in a default stable position with its arms thrust out to the sides, ready to dance or whatever. When powered down, the servos are all released and it just crumples down (best to hold it to avoid damage). It’s actually kind of cute.

You control the unit with an app on an Android or iOS device, which connects to the Alpha 1 Pro via Bluetooth. There is also allegedly Windows and Mac software available to provide more advanced programming, but I’ll return to that later.

My understanding of how it works is that the program of actions are fed from the control device to the robot which them dumbly runs through them as a script. The internal processor for the unit provides control over the servos and makes sure they do what they’re supposed to. It’s unclear whether there’s any internal feedback from the servos – if, for example, they cannot fully perform the ordered action. I suspect not but I can’t say for certain. What I can say is that the programming consists of a simple sequence of actions, which the robot tries to do regardless of its position. Even if it falls over it will just plough on with the actions in order.

As I said, is this a robot? You decide. Whether or not it is, it is clever and an impressive piece of engineering getting an inherently unstable object like the human form to be able to walk around and dance without falling over (although it did manage to do that sometimes).

There’s a community of users so you can download functions and routines from other users using the app and run them. I sampled a few. The dancing apps generally had music coming out of the speaker perforations on the back of the Alpha 1 Pro’s head. There were also storybook routines, in which a children’s story would be read out while the Alpha 1 Pro performed actions relevant to the story. The Alice in Wonderland one had the magic mushroom bowdlerised into fruit juice, but the robot lowered itself to its “haunches” and stretched upright again appropriately as Alice drank. With this function the sound emerged not from the robot but from the controlling phone.

Some of the more energetic dances really required the Alpha 1 Pro to be on a smooth and fairly slippery surface so that its smooth feet could slide. On carpet – even the low pile industrial style of my office – its feet sometimes dug in too deeply at it would topple. It managed to survive these mishaps with no damage, but it was a worry with nearly nine hundred dollars worth of kit.

You can do some basic programming using the app, by moving the robot’s limbs into place, one by one, and adding these as actions. Kind of like recording the actions of a marionette. Once you’ve done that, you can edit their duration.

There are also two “Gamepad” modes – labelled “Soccer” and “Gladiator” – in which your phone becomes a controller with arrow and turn keys, plus an array of actions (mostly kicking for Soccer, hitting for the other).

UBTech says that the Alpha 1 Pro is good for more than an hour of operation on a battery charge. I ran it on a variety of routines, mostly dance ones but also story telling and a few random walk, turn and punch moves. Plus a couple of off and on cycles. It ran for a very impressive one hour and forty five minutes before giving a warning about a low battery. When I charged it up afterwards, my occasional checks on the stopwatch indicated it achieved full charge in somewhere between one hour and fifty minutes and two and a half hours.

You are supposed to be able to do more advanced programming using a PC or Mac program downloaded from the UBTech site. I couldn’t find the software. I turned to customer support for help and 24 hours later was emailed a link to the site from which I could download it.

Essentially this works as an action editor, allowing you to drag in actions to a time line or move the robot in a 3D view. The connection is not Bluetooth for this, but via USB.

This is clearly software designed by engineers principally for themselves for use on a particular computer platform. The screen layout would not render in a nice way on my Microsoft Surface Pro, with a combination of unreadably small characters and overly large ones overlapping their allotted spaces.

I was unable to drag the actions to the timeline successfully, thanks I think to the need to first establish a time line by opening up some music. But that proved to be a problem. The first track I tried was an MP3 using my preferred fairly high variable bitrate encoding (using a good encoder such as LAME, this gives remarkably transparent results). The UBTech software rejected it, saying you have to use MP3 music encoded at no more than 128kbps. So I searched my music until I found a track encoded at 128kbps and tried to open this in the software, but the software crashed. It kept on crashing, even after a reboot.

At that point I gave up.

Clearly the software works on the right platform because there is a community of people who have used it (the same software appears to be used for all models of UBTech robots). If I was getting right into it, I’d persist and makes some compatible music (maybe my ID3 tags were the problem. Who knows?) and work my way through the system. But I’d be expect to be making an investment of a few tens of hours to master the process. Something I’m not prepared to do for the purposes of a review.

So, a robot? It looks like one, but it’s a device which is limited to programmed actions, with no decision trees throughout the program. But, then, isn’t that essentially how manufacturing robots work?

What I do know is that it looks very cool, is a lot of fun, works well with the apps, and could offer many hours of enjoyment for an enthusiast prepared to master the PC programming software.

Dreame Bot L10 Pro – the robots are getting smarter, much smarter (review)