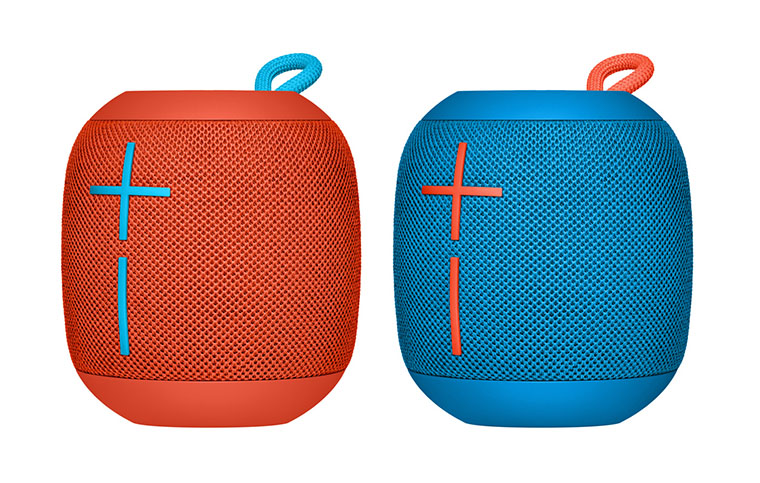 Mini Bluetooth speakers abound, but for a while we’ve heard good things about the Ultimate Ears “Boom” range. The latest from the range is the Wonderboom, compact and tough models in a range of bold colours.

Definitely compact. Each Wonderboom is halfway between a sphere and a cylinder, with a flat top and bottom. Even though only 102mm tall and 94mm wide, each weighs 425 grams. In each is a lithium ion battery rated to operate the speaker for ten hours (with the usual caveats applying), along with two 40mm loudspeaker drivers and two 46mm by 65mm passive radiators.

Passive radiators are like loudspeakers, except that they’re not electrically connected. They are weighted and tuned so that they will resonate at a chosen range of bass frequencies in order to strengthen and extend the bass.

These are real portable party speakers, with an IP67 Ingress Protection rating. That means they’re totally dust proof and capable of being dunked in the pool for up to half an hour (but only up to a metre, so keep them at the shallow end). Not for use in water though. Bluetooth signals don’t penetrate water at all well.

They project sound in all directions through the firm mesh with which their surfaces are finished.

They come in half a dozen bold colours: black, grey, orange, blue, light pink and mauve. Of course, those colours have got to have special names. They are, respectively, Phantom, Stone, Fireball, Subzero, Cashmere and Lilac. Each has a short cord loop coming out of the top rear (so you can hang it on things – it was a touch too small a loop for me to get my index finger into it), a “UE” logo on the top and a large symbol on the front, all in the same colour contrasting with the main body colour.

There are no physical inputs on the Wonderboom; it’s Bluetooth all the way. There’s no mention of particular codecs, so I’ll assume it’s SBC only. One special feature is the ability to link two together to double the sound, so to speak. Unlike some of UE’s other Boom models, two is the upper limit, nor is there a special app for controlling the Wonderboom speakers.

A rubber cover near the bottom at the back covers a Micro-B USB port by which they are charged. A short, bright yellow flat cable is provided to plug them into a computer or USB power supply for charging. UE says that the charge time is 2.8 hours.

One other thing I should note: if you were to purchase these speakers from the company’s US website, you’d pay $US99.95. The Australian price of $AU129 is actually better value at current exchange rates. UE doesn’t seem to apply the Australian dollar premium that we so often see in consumer electronics.

One of the many interesting things that Apple did was make the packaging of quality electronic products sexy. Buy a premium phone today and the chances are it it’ll be in a box of the kind introduced by the iPhone.

These speakers’ packaging is fine indeed. Slicing the two transparent sticky tabs allows a colourful sleeve to be slipped off a black cardboard box. That box is split diagonally, but held together by another sticky tab – easily cut through, allowing the top and front to be folded back to reveal the speaker.

Apart from a tiny sheet with regulatory information in two languages and end-of-life dismantling instructions (presumably so one can remove the battery for proper disposal), and a minimalist diagram on the inside of the box there are no instructions.

For the most part I didn’t need them. When plugged in to charge, the dash at the front top lit, so that gave me a hint as to what was likely the power button. When the light went out I assumed that they were charged, so I held down that assumed power button for a few seconds and was rewarded by a tone, and a flashing light at the rear top of the unit. I took that to indicate the speaker was in pairing mode.

Sure enough, there it was on my phone, appearing as just plain “Wonderboom” (with nothing to differentiate it from any other Wonderboom). Selecting it, pairing was complete. I soon learned that holding down that power button for a few seconds switched it on or off. And, there it went, playing music.

But there I got stuck, between a combination of lack of imagination on my part, and a lack of instructions provided by Ultimate Ears (including on the Australian website, but finally resolved by FAQs on the US website, which is why I now know how to use the speakers properly).

My lack of imagination left me thinking that the very large “+” and “|” signs on the front of each Wonderboom was merely fine decoration. But mentally rotate “|” by ninety degrees and of course you have “–”. Oh … now I get it! Press these symbols and you can change the volume. That made them far more usable.

The basic diagram inside the box indicated that the button on the opposite side at the top – which was also lit – was the Bluetooth key, and that it proved to be.

But there was no obvious way to do things like Play/Pause or Skip tracks. However, even before getting to that, my immediate quest was to work out how to “Double Up” – to make it so that both speakers could work together – hopefully in stereo – with one source. The answer was in that FAQ on the US website, and nowhere else that I could see. It turns out that the “UE” letter at the centre of the top of each speaker is also a control key. Pressing it does the Play/Pause thing. Double tapping skips to the next track.

And pairing one Wonderboom with your portable device, switching the other on as well, and holding down “UE” for several seconds causes them to connect together so that they’ll both reproduce the sound.

The sound these little things produced is really quite ridiculous. By “ridiculous” I mean astonishingly loud, remarkably smooth and with surprising bass. For the size of course. But truly amazing for the size. Had they been twice the size I still would have written positively about their sound.

Really deep bass? No, of course not. The laws of physics will be broken for no electronics company. But listenable and musical lines from the rhythm section of a rock band? For sure.

Party volume levels? No, not really, but in a normal environment they certainly produced satisfying sound levels, particularly when they were within a couple of metres. Across the other side of the room could involve having to push too much power into them, and a bit of stress would creep into their delivery. So keep them reasonably close.

Female vocalists sounded excellent. There was no nasty high frequency zing, but a good precise performance with cymbals.

Connecting the two was straightforward (once I found out how) when you press the appropriate buttons, and there’s clearly a fair bit of handshaking going on between the two since it takes perhaps ten seconds for the connection to complete. The operate as a pair of mono speakers, rather than one handling left and the other right. A surprisingly sharp “stereo image” was produced with all sounds at dead centre between the two of them.

They work when plugged into the power as well as from battery, but they auto switch off after fifteen minutes when not being used, even when on power. So you can’t just leave them powered on all the time ready for use. When switched off they lose the connection between them too, so you’ll need to re-establish that when you turn them on again.

Rather to my surprise, the US website has a specifications section for them (which is how I found out about the drivers inside them). This specifies their maximum output level at 86dBC (C-weighted, means with roughly equal regard payed to all frequencies, unlike A-weighting which pays more attention to the midrange).

Nerd paragraph ahead! I figured I might as well measure the bass end to see what’s going on there. It turns out the output falls away quite smoothly from the midrange to be down by about 6dB at 300 hertz and 12dB at 150 hertz. But then below that point the passive radiator kicks in, with 95 to 110 hertz back to the midrange levels. At 80 hertz its back at -12dB. So clearly UE has engineered the system so that although a lot of the upper bass is quite recessed, that mid-bass boost from the passive radiator restores the impression of strong bass. That’s clever.

But I do hope that this fetish for minimal to zero instructions passes. It can be so frustrating for users. Well, for this reviewer at least.

Overall
Features
Value for money
Performance
Ease of Use
Design
Reader Rating2 Votes
Remarkable sound from such small speakers; waterproof; can pair two for louder sound
No option to stop speakers from powering down; not individually Bluetooth named so can be hard to pick between
4.5