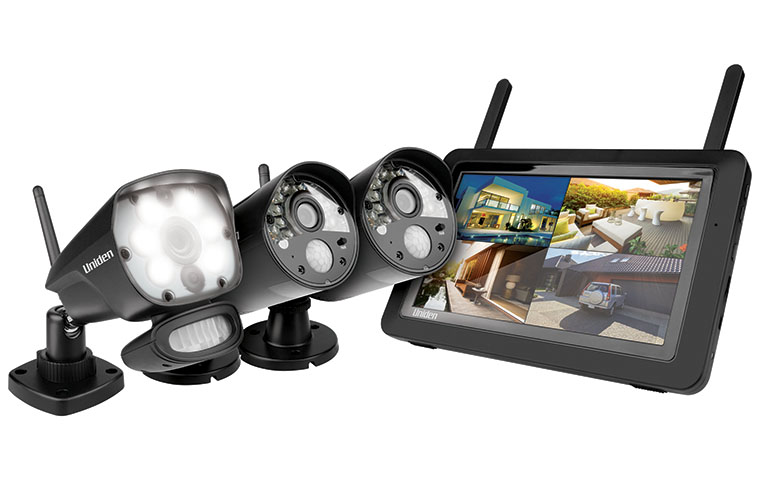 The idea of installing a security system can be daunting. Apart from anything else, many such systems involve the payment of on-going fees to a security company. But what if you could get a reasonably priced system that you can monitor yourself and which takes little more in the way of installation than wielding a screwdriver and plugging things into a power point?

There are several variations on this system, with a different number of cameras, and with a choice of two different kinds of camera. The G3721 variant comes with three cameras. It’ll support up to four and you can the extra one as an option.

The centre of the system is the G37XX monitor. This has a seven inch (178mm) colour touch screen panel on its front with a resolution of 1024 by 600 pixels. It’s through this that you monitor what the cameras can see and control them. It has a slot for an SD card – up to 64GB – for recording from the cameras when they’re triggered.

There’s a built-in battery which provides up to an hour and a half of operation untethered from a power point. This takes eight or nine hours to charge, so you perhaps wouldn’t rely on it for regular operation, but it could be useful when going around, aligning cameras so make sure their fields of view are just so.

It also has an Ethernet port, which you don’t need to need for standard in home operation, but which allows you to use the system remotely – that is, when you’re away from home. At the back is a kick stand so that the monitor can remain upright for convenient viewing.

Both can see up to 12 metres in the dark with IR LEDs lighting the way for a monochrome picture. Both types of camera are rated IP65, which means dust tight and safe against water jets from any direction. Which means rain proof. The G3700 cameras have plastic cases while the G3700L is metal cased. Both are connected to their mounts with universal joints to assist in pointing in any direction.

The G3700L is distinguished by having six powerful white LEDs which produce the “Spot Light” of the name, but which I’d consider to be more a flood light. When triggered by the motion detector, this comes on to light, quite well, a chosen area.

The system is wireless. Only wireless: there are no other connections on the cameras. But the wireless connection is not WiFi. The cameras don’t connect to your home network. They communicate only with the monitor. Uniden says that they have a range of up to 150 metres.

While the cameras both support Full HD video, and they use the high efficiency H.264 codec to compress the video, the resolution actually used depends on the number of cameras employed, and the frame rate. Each camera can only create Full HD at 10 frames per second. For 24 frames per second the resolution falls back to 720p. More cameras congests the airwaves, so with four cameras connected the highest quality is 720p from all four at up to 15fps.

A nice touch: everything you need is included in the box, short perhaps of extension leads. There are plugs and screws for affixing the cameras to a wall, an Ethernet cable and an 8GB Class 10 speed SanDisk SD card for recording.

Frequently I rant about the difficulties involved in setting up gear. Especially when there’s wireless connections involved. Anything unexpected – not in the manual – might lead to a heart-in-the-mouth time of worry for the person who had just passed over hundreds of dollars for some gadget, and is perhaps not perfectly sure whether the device isn’t working as it’s supposed to, or they’ve done something wrong.

I know that’s how I usually feel when things aren’t going quite the way they ought to.

Which is why I thought this Uniden system was great. Brilliant. The hardest part of setting up for me was installing the battery in the monitor. That needed a tiny Philips head screwdriver to remove the battery compartment lid. I guess a permanent installation would involve ladders and more screwdrivers, but for this review I made do with temporary mounts.

So once I’d screwed the cameras onto small slabs of wood, I put them in place and switched everything on. Within a couple of minutes I had two pictures from the two G3700 cameras up on the monitor, side by side. No intervention required.

The G3700L – the camera with the spot light – didn’t appear. That was actually packed in its own display box within the system’s larger box, so it hadn’t been paired with the system already. But that was fixed easily as well, simply by following the instructions on a slip of paper in the box. It just involved pressing a “pair” button on the monitor and the camera.

If they’re a long way apart, well, that’s where the battery powered portability of the monitor comes in useful.

The screen was divided into four, now, with one quarter blank since I didn’t have a fourth camera, but each could be easily brought up to fill the screen. When I did so, the built in microphone on the relevant camera would feed sound back to the monitor so I could hear the other end as well as see it.

Recordings could be manually invoked with a press on a screen icon, but by default the cameras would fire up and grab fifteen seconds of video whenever anything significant moved within their field of view. You can specify parts of that to ignore using the settings function of the monitor.

Speaking of which: the picture was clear enough, and the touch functions worked okay, but you will have to be firm with it. This is more like using the touch screen of a car entertainment system than an iPad.

The floodlight on the G3700L was very bright, allowing me to see to the back fence in my yard, some forty metres away. The time it stays on can be configured, but by default was about a minute. The black and white image delivered by the other cameras after dark will win no Oscars for technical achievement, but were clear and useful.

There was some latency between what appeared in front of the camera and it being reflected on the monitor screen. About a second, as close as I could measure it.

I noticed that the early videos – they use the Microsoft .ASF container, but are internally the same codec as that used on Blu-ray – were date stamped for some time last year. That’s because I didn’t connect the Ethernet cable for a couple of days, concentrating only on standalone performance. But once I connected it to my network, evidently the system updated itself with the time and date and started date stamping things correctly.

Of course, the main reason I connected it was to check out the remote operation. It worked well, if a bit slowly. My upload connection speed to the Internet is a lousy 0.8Mbps so streaming video from my house is problematic at best. But it did work after perhaps a ten second delay in connecting. The app doesn’t allow all four feeds at once, just one at a time (that would be way too much demand on bandwidth), so switching from one to another was a bit slow. Resolution appeared to be pretty low as well.

But, hey, it’s pretty amazing it works at all. And it needs no additional special products.

The only thing missing from the package, as far as I could see, were stickers. Stickers? For sure. The best outcome that can be provided by a security system is to completely deter would-be felons. A few stickers indicating that one is protected can help there.