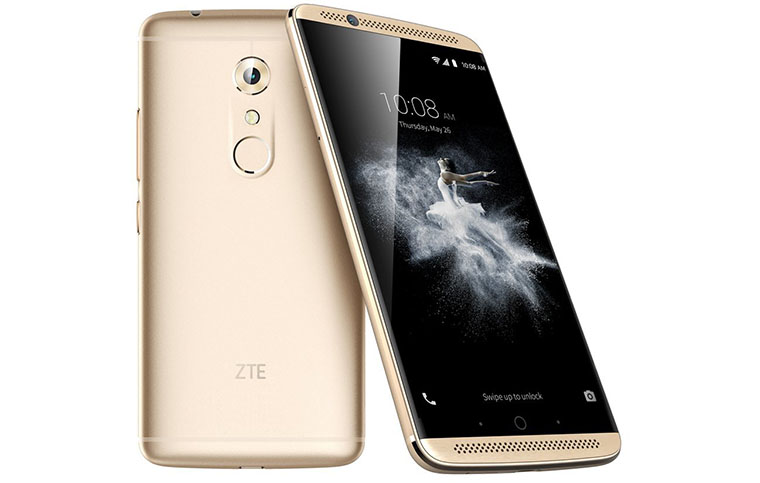 Budget phones often look like expensive ones but you soon find that they’re missing a feature routinely carried by premium models. So I was quite expecting the new phone from ZTE, the Axon 7, to be missing a feature or two of the kind I rather like. But despite the $699 ticket, you know, I couldn’t find any omissions. Any!

So what are these features that I like and now feel like I can’t do without? Fingerprint scanner? Yep, the Axon 7 has one of those on the back. High resolution screen? How about WQHD AMOLED screen, resolution: 1440 by 2560 pixels? Strong glass over the screen? Yup, Corning Gorilla Glass 4.

Big screen? Why, how about five and a half inches? And that’s five and a half inches that occupies just about the entire front face of the device – there’s a reason why the fingerprint scanner is on the back. The whole phone measures 151.7mm tall, 75mm wide and 7.9mm deep and weighs 175 grams.

Plenty of storage? Well, there’s 64GB built in, and you can use the tray for either two micro SIMs, or one SIM and a microSD card of up to 128GB. Decent processor? Absolutely: a quad-core Qualcomm Snapdragon 820 with 4GB of RAM.

NFC? Yes. OTG? Yes. Here’s a long shot for a relatively inexpensive phone: USB Type-C? Or stuck with the fiddly Micro-B USB? Hooray, USB-C! It doesn’t make a whole lot of difference in capabilities, in reality, but it is easier to plug in, and USB Type-C is the way of the future.

Wireless charging? No, we don’t have that. And that, folks, is I think the only thing missing. Although, to be fair, that is also missing from the great majority of phones on the market, including many big name ones.

ZTE also notes that it has packed some high end audio facilities into this phone. In particular, it has a high end digital to analogue audio converter (often called a DAC in these parts) from AKM for music playback, and a high end analogue to digital converter (ADC) for recording. There are three microphones for the latter, two speakers for the former, and a proper headphone socket on the top of the device. One of the speakers is at the top front of the phone, while the other is at the bottom front, so you can put it on its side for stereo. It also has Dolby processing to fake 360 degree surround sound through headphones for when you’re watching movies. It can decode Dolby Atmos and Dolby 7.1 sound too. Fine.

The audio output has real high fidelity specifications, with support for audio at insanely high sampling rates – 384kHz. With recording it is no slouch either, with high resolution up to 96kHz sampling available, and three microphones to feed it.

The WiFi is dual band up to 802.11ac with all the features you  want, including the provision of a hotspot using its 4G connection. It supposedly supports Miracast for sending its screen to smart TVs and such, but I sure couldn’t find any way of doing it. There’s the latest Bluetooth – version 4.2 Low Energy. The 4G connectivity supports up to Cat 6 with 300Mbps coming down to the phone, and up to 50Mbps going the other way.

The phone comes with a lightweight transparent case that covers sides and rear, with appropriate cutouts for the fingerprint scanner, camera lens, keys and ports.

I tried the lazy man’s way of setting up the phone, using the auto-copy facility from the Samsung Galaxy S7 I’ve been using lately. Both phones found each other when their backs were touched, but the “Completing Connection” part failed several times, and the “Setup Up Other Device” facility on the Samsung likewise couldn’t find the Axon phone, so in the end I proceeded with setting up using my Google account. That meant, of course, lots more entering of passwords and settings, but my apps at least downloaded automatically.

The Back and Previous Apps keys are the Google way around rather than the Samsung way around. That is the return key is at the left and the recent apps key at the right. Or, rather, their sensitive spots since they, along with the home “key” are all touch sensitive spots. I prefer the Samsung way, simply because I go back a lot more than look at recent apps, and the Google way puts that “key” out of range of my right thumb, especially with a larger phone like the ZTE Axon 7.

Almost everything worked the way it ought to, although I found it a little frustrating that there was no obvious way to increase the density of icons on the various home screens. It seemed to be stuck in a four by five grid, even though with the real estate provided by this phone, more could have been packed in. Likewise, the fixed app shortcuts at the bottom were limited to four across.

The fingerprint reader being in the middle of the back, you’ll have to establish a system that works best for you. I found a lot of the time I was getting a “partial fingerprint” warning and had to re-seat my finger. It’s worth mastering because of a nifty feature in which you can associate apps with fingers. I set the phone to just unlock with my left index finger, and unlock with the camera ready when I used my right index finger.

So all that was good. But there were a few little wrinkles in the user interface that seemed kind of not quite right. For example, the scheduled “Do Not Disturb” function is always useful, but for some reason the Gmail app overrode it and made its notification noise anyway. For example, when I’d touch a notification that something had come in via Facebook Messenger, it would take me straight to the item, but when I left it that item would not be marked “Read”, so I’d have to go in via the Messenger interface to remove the bold marking indicating its unread status.

For example, the Music app didn’t seem to want to play the music in any kind of sequential manner, but jumped randomly around tracks within the selected album. Although, order aside, it did play everything beautifully, with excellent quality and support for extremely high resolution audio.

For example, in the nifty set of “Tools” provided with the phone, the compass wouldn’t work properly, insisting that the phone be moved in a figure of eight pattern to calibrated the compass, something that was never quite achieved.

But there were pleasant surprises too. As I was finishing off this review, I went exploring in Google settings to see why me shouting “OK Google” achieved nothing. It turned out that “OK Google” detection was switched off, by default apparently. So I switched it on, muttered the magic “OK Google” incantation three times so it could learn my voice, confirmed my identity with my fingerprint. And then I gave it a whirl, only to find myself presented with an unexpected screen. It turns out that somewhere along the line, the phone had “Google Assistant” installed, the next, upgraded version of “Google Now”. I can’t say from my very quick play with it that it offers much more than “Google Now”. Certainly the coffee shops it suggested within 11.2 kilometres completely missed the two closest, but that would suggest a weakness in Google’s database rather than the new “Assistant”.

So nothing big. Nothing nasty. Just some stuff that required repetition, or replacement of a built in function with an app. All the hardware certainly seemed to work and the phone had a solid feel in the hand. The screen was clear and bright in general, but its auto brightness function was pretty aggressive, particularly with winding down the screen brightness under artificial lighting, sometimes leaving it a bit harder to read.

The camera was good for standard snapping in decent light. With lower light it sometimes seemed to have trouble focusing, and sometimes there was a distinct delay of a second or so between pressing the shutter button and the photo being taken. I wasn’t clear whether some other process was consuming the required resources, or if the phone was spending the time trying for a better focus.

There are a variety of resolutions available in taking photos, but no RAW mode for less processed results. Some of the pictures did tend to have somewhat visible edge enhancement, which made them look good on the phone screen, but when zooming in later with the computer, detracted somewhat from a natural result.

The 4G connection was reliable. I use OneDrive for syncing and that worked perfectly. The phone also worked perfectly as a wireless access point when I was out and about. At a random airport I checked the 4G connection speed and it downloaded at 33Mbps and uploaded at 8Mbps. Both of those felt blindingly fast to someone whose ADSL connection gives him less than 6Mbps downloads.

The ZTE Axon 7 is a very good smart phone with a very good screen and very good performance at a price of around two thirds of that you’d pay for one of the big names in phones. That’s pretty impressive.