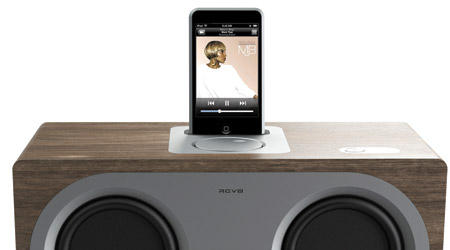 The Blok is undeniably an eye-catching premium iPod/iPhone dock. As its name suggests, it’s rather blocky. That’s not just a description of its shape, however, but indicative of the materials used in its construction. You won’t find much plastic here; instead, the majority of the Blok is made out of rather solid wood, with machined aluminium accenting the controls and faceplate.

Moving onto the unit’s minor quirks, the Blok is not shielded for iPhone users, which means you’ll either have to disable the inbuilt 3G/GSM radio (turning your iPhone into an iPod Touch) or put up with potential interference.

The Blok’s remote is also an oddity, as it’s a hockey puck-shaped disc. Despite the odd shape, this also works well. Placing it flat doesn’t press any of the buttons hard to enough to impact anything, and the range of the remote is good.

The size of the Blok allows it to locate its two 20 watt drivers a reasonable distance from each other. Or at least reasonable by iPod dock standards.

The Blok’s size makes it rather less portable than many other docks, but also gives it enough rigidity to allow for minimal sound distortion even at high volumes. The effect of this on audio is quite marked, with rich smooth tones from most musical styles. Speaker separation is quite good when compared to other iPod docks.

Like many other iPod docks at a premium price level, there’s as much an aesthetic as a practical choice to make with the Blok. Some will love its retro wooden style, while others find it less compelling. In either case, it’s hard to overlook the high quality of its audio reproduction.

Overall
Features
Value for money
Performance
Ease of Use
Reader Rating0 Votes
Heavy-duty construction; Excellent audio reproduction
Some won't like the look; Large for an iPod/iPhone dock; No shielding for iPhones
4.6