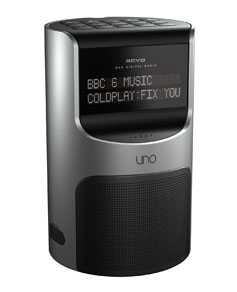 The Revo Uno digital radio is a product that’s similar in size if not design to the Revo Pico, and designed primarily for use as clock radio. A tubular radio with a single integrated speaker, all the controls are found on the top rather than the front of the device. Those controls are very simple, but that’s not unexpected, since there is little to this radio beyond its core tuning and alarm functions. It’s DAB+ capabilities are not tremendously compelling, and its single 5 cm driver cannot do justice to the extra clarity that DAB+ provides.

Grading that speaker on the clock radio curve, we’d say that it’s a cut above most other similar devices, delivering cleaner sound than most other single-speaker clock radios. But that’s not saying much, and the speaker isn’t of high enough quality to demonstrate a qualitative difference between digital and FM radio (though there is a noticeable volume difference). You can’t connect it to external speakers to improve the audio quality, either – there is no line-out on the Uno, though there is a headphone port.

It does have a line-in, however, that allows you to plug an external device such as an MP3 player into the Uno. It’s not an iPod dock – you can’t control the playback from the Uno – but it does allow you to pipe your portable media player through the Uno’s speaker.

Perhaps its most compelling feature is its alarm clock, which allows you to set up to four different alarms and gives you ridiculous levels of control over their sound. You can set different alarms for weekdays and weekends, have alarms set to different times, go to different stations and work at different volumes. The sleep button is a broad touch-sensitive pad at the front of the Uno that would be impossible to miss even in the most sleep-muddled haze.

The Uno is mains-powered only and doesn’t come with a remote control (though one is available as an optional accessory). It’s also far from the most compelling device we’ve looked at here, and even if you like the Uno’s compactness we’d recommend the Pico in its stead, especially if alarm capabilities aren’t important to you.