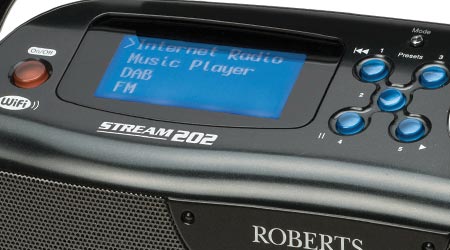 DAB+ radios can be divided into two groups: basic receivers that are cheap and cheerful, or full-spec devices that also function as Internet radios via Ethernet or wireless connection. The second type is often so expensive, you’d be forgiven for thinking twice before committing $800 to a kitchen radio – even if you really want that Internet functionality.

The Stream 202 neatly bridges this divide by giving you all the functions of a top end system, at a reasonable price for a device with this many features.

This is very much a 21st Century version of your Gran’s classic kitchen transistor radio. Handbag-sized, it weighs only a couple of kilos and is easy to carry around with you throughout a lazy day of gardening or whatever: it also runs on six D-Cell batteries which will give 35 hours of play time.

As well as the DAB+ receiver which will give you access to all digital radio stations in your area, there’s built-in WiFi which hooks on to your home network and streams Internet radio stations. How many stations? More than 10,000.

You can also set up your PC or notebook as a media server, and the Stream 202 will connect and play back MP3 or WMA files.

It’s all controlled via a simple jog-wheel: spin to move up and down the menus and click to select.

As with all Internet radios, set up of the Stream 202 can be fiddly. DAB+ is easy: just scan for stations and they’re listed in alphabetical order. Internet requires first connecting to your wireless router (or via an Ethernet cable if you don’t need the radio to be portable), including inputting your security details.

Connecting to a media server on a home PC is best left to the IT guru in the family – if you are one of the secret fraternity who understands the arcane rituals, then it’s pretty straightforward.

Once you have content ready to go, you can sort stations into favourites and scan for old-school FM broadcasts too.

The main disappointment with the Stream 202 is that it actually sounds a lot like your Gran’s old transistor radio. Since the speakers are mere  3 watt units, they don’t exactly set the china cups rattling in the dresser.

A lack of a dedicated woofer – as found in more expensive units – also leaves audio sounding a little thin.

However, this is not intended to be an audiophile’s device by any means. If you want superior sound quality, you can grab something like the Roberts Sound 16, which has discrete bookshelf speakers.

This is a lot of functionality for the price, and the Stream 202 does offer everything DAB+ has to offer, and does so without making you wonder if you should have just spent your money on a component FM tuner. Light and easy to use, it may not change your free-to-air world, but it’s certainly a worthwhile way to banish that terrible, terrible AM sound.