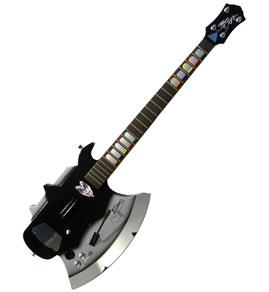 Ever been rocking out on Guitar Hero or Rock Band, all kitted out in your replica KISS outfit, and thought to yourself, “I could so give a better performance if I had myself an axe like Gene Simmons’?” Well let loose the shackles baby, because your rock and roll dreams have been answered, with the release of the Gene Simmons AXE Guitar Controller!

The shy, retiring Gene Simmons says, “I never do anything half way. My AXE controller is the closest thing you can have to being onstage in KISS. I created and designed the Gene Simmons AXE bass guitar and I can’t wait for the fans to experience it for themselves”. “The Gene Simmons AXE guitar is such a recognisable symbol – people have been asking for a gaming replica ever since Guitar Hero was first introduced.”

The Gene Simmons AXE guitar videogame controller is a three-quarter sized replica of the original guitar, right down to the colour, with a Gene Simmons autograph and photo – WITH makeup thankfully – painted onto the guitar body. It is compatible with Guitar Hero and Rockband, on the Nintendo Wii and Sony PlayStation 2 and 3 consoles. At the time of writing there is no information available on when an Xbox 360 version will be released.

The controller operates on the 2.4GHz wireless spectrum, with a range of 30 feet. It runs on 3 x AAA batteries, which should give somewhere around 40 hours of battery life.

The Gene Simmons AXE Guitar Controller will go on sale in April 2009, with the RRP still to be announced.