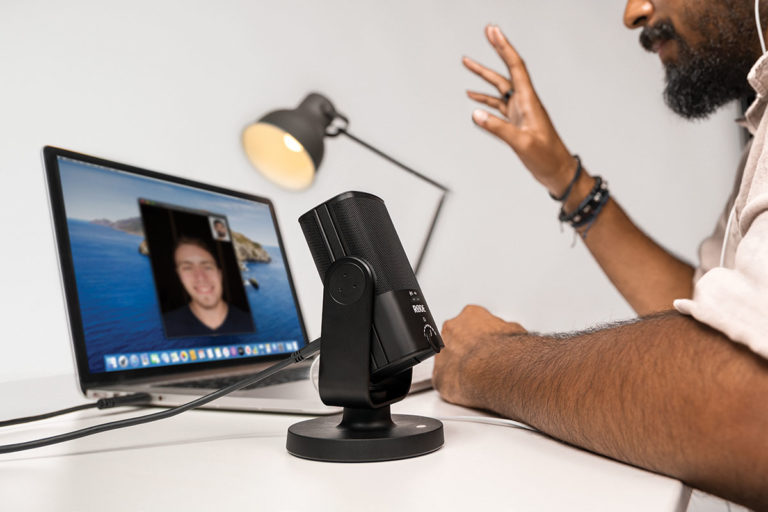 For obvious reasons, we like to highlight Australian brands here at gadgetguy.com.au. Especially when they’re as prominent in a field as Rode Microphones is in its. The company is one of the world’s leading developers of quality microphones. And its newest microphone is an affordable model for podcasters, and others who want quality. The Rode NT-USB Mini is priced at less than $150.

And check the end of this review. You may be able to win one of these microphones from Rode (closes 6 March 2020). (BTW, the name Rode uses is “Røde”, but we’ll just run with the simpler form of the name.)

UPDATE (a short time later): I kind of assumed that while designed in Australia, the microphone would have been made in China. But I’ve just looked at the bottom of the box and it turns out that Rode manufactured the microphone here.

The Rode NT-USB Mini is a studio-style microphone, but with a built-in digital interface. It is designed chiefly for plugging into a USB slot on a computer. The digital standards are absolutely standard. It operates at 48kHz sampling and 24 bits of resolution. Accordingly, it’s compatible with just about any computer out there.

Being studio style, it’s a side-address microphone. You don’t speak into the end of it but at its face. Or perhaps across its face, according to your style and preference. It’s quite small. The microphone part is roughly a rectangular prism measuring 52mm wide, 100mm tall and 42mm deep. This is mounted into a U-bracket in which it can swivel freely, but with sufficient friction to maintain its position. At the bottom of the U-Bracket is a hole threaded ready for a standard microphone mount. It’s provided with an adaptor for the smaller threads used on some mounts.

But chances are you won’t use those because the Rode NT-USB Mini comes with its own stand. A rubbery insert in the standard mount hole is pre-installed, and this mates with the upper protrusion on the included desktop stand. A fairly strong magnet in the base keeps the microphone in place on the stand, yet able to removed with a simple tug.

As it happens, the importance of this magnet was proved by the first review sample that was provided. Somehow the magnet had been left out in manufacture, and the microphone stood on the stand only uncertainly, and easily toppled when the microphone was tilted. The replacement with the proper magnet in place worked perfectly.

Inside the Rode NT-USB Mini microphone

Inside the Rode NT-USB Mini microphone is an electret condenser microphone capsule, an analogue-to-digital converter with USB interface and a digital to analogue converter along with a headphone amplifier. There are no batteries. The unit is powered via its USB connection to computer or other device.

On the back is the USB connection – it uses USB Type-C. That’s welcome. The faster we move to the USB Type-C plugs and socket the better, although the higher speed isn’t needed in this application. Also on the back is a 3.5mm headphone output. This proved perfectly capable of driving my 80-ish ohm impedance headphones, along with lower impedance models. In an application like this you’d typically choose closed-back headphones for good sound isolation.

On the front – that’s the side that also picks up your voice – is a level control knob which doubles as a push button. This control is for controlling not recording level, but playback level for the headphones plugged into the unit. In normal position, the sound the headphone output delivers is that provided by your computer. Press it, and the sound from the microphone is routed directly to the headphones. This eliminates latency. Converting the analogue signal from the microphone to digital, sending it to the computer, waiting for the computer to do whatever with it, receiving the digital sound back from the computer and converting it to analogue … all of that takes time. There are plenty of situations in which you want to hear what the microphone hears without dozens of milliseconds of delay.

Even when delivering a direct feed from the microphone, the headphone output still also delivers any audio being provided by the computer. So you should switch off the monitoring function, if any, of your digital audio workstation.

So, how does one set the recording levels in the absence of a hardware control? You do that in either your recording software – if it has that control – or with your device’s operating system input level control. For those interested in such intricacies, I should make it clear that you install no drivers for the Rode NT-USB Mini microphone. That means no ASIO on Windows. ASIO isn’t really required because the microphone doesn’t attempt challenging high resolution sampling frequencies. The microphone DAC runs at a fixed 48kHz sampling and 24 bits of resolution. Some high-resolution enthusiasts may complain, but that’s a solid setting for high quality audio. In particular, the 24 bits of resolution allows one to leave a little more headroom in play then when using 16 bits.

So you use standard Core Audio on Macs or Direct Sound or WASAPI in Windows to handle the sound. If you are using recording software without a built-in recording level control – for example, Reaper or my ancient favourite, CoolEdit 2000 – then you may use the level control in Core Audio or Windows.

In Windows, that means delving into the creaky Windows audio interface to set the level. That’s not the easiest thing to find. One way: right click on the speaker icon in the system tray, click “Open Sound settings”, scroll down to “Input”, click “Device properties” and you’ll have a panel with a level slider on it.

Do you need to set the level?

If you’re using high-end audio production software like Reaper, you don’t really need to set the recording level. You adjust the relative levels of the tracks when mixing. If you’re using something simpler to capture the audio and don’t really plan mixing, then you may want to fine tune using the OS level control mentioned above.

I found that on a couple of Windows computers there was sometimes a distinct click in the sound when I adjusted the level – although that wasn’t the case with a Mac. So it’s best to experiment and get the level roughly right before hitting the record button. But with 24-bits of resolution, you can “normalise” the sound later with no practical impact on quality.

In the Rode NT-USB Mini microphone, the mapping of the acoustic sound level to digital audio space seemed well judged. I found that with all the different devices I tried, it delivered sound and a good clear level with plenty of headroom with no fiddling with system level controls. If I tried really hard, I could drive the microphone into reaching the hard zero decibel limit – digital clipping in other words. Some microphones won’t go beyond -1dB or so. I prefer having that extra decibel of headroom.

(But, then, I come from analogue days when the noise floor of the audio cassettes was typically -60dB or worse, so one was always trying to squeeze a few more decibels of dynamic range out of one’s recordings.)

Rode rates the microphone as handling up to 121dB SPL.

Well, of course the Rode NT-USB Mini microphone worked nicely with Windows and Macs. I’m not much of a Mac person so I only gave it a quick whirl on a Mac with a couple of basic recording programs. With Windows I used the microphone with Reaper, Audacity, CoolEdit 2000, Skype and Windows 10 built-in voice recognition. It worked very nicely with all of them. The microphone really was plug and play with all the computers.

But what about other devices? How about an iPad? Yes, it turned out that the power draw of the Rode NT-USB Mini microphone was low enough to allow it to be used with an iPad – and an iPhone 6 as well. I used both an old camera adaptor and the more recent one that allows you to power the iPad/iPhone at the same time. Both worked fine.

Likewise, two different Android phones – a Huawei P30 Pro and a Google Pixel 2 XL – worked well with the Rode NT-USB Mini microphone. For both, I used a basic USB Type-A to USB Type-C adaptor plug. I could not get it to work with an 8-inch Samsung TAB A tablet with a Micro-B USB adaptor. It’s possible that the tablet doesn’t have built-in support for digital audio being fed via that connector.

So, we have the Rode NT-USB Mini microphone plugged into a device, have the relevant recording software running, how did it sound?

In short, excellent. The sound was perfectly natural in a slightly unusual way. Generally with microphones there’s this thing called the “proximity effect” which boosts bass as the sound source – especially your mouth – gets closer to the microphone. That also happens with the Rode NT-USB Mini microphone, but it somehow seemed to remain in good balance, short of you jamming the thing right against your lips. I used some musical instruments and bells in addition to my voice. Bells are particularly hard to capture well, being full of ridiculously high harmonic and non-harmonic tones, and extremely sharp transient pulses. When I listened to the bell recordings later with high quality headphones they were indistinguishable from the bells themselves.

Rode says that the microphone has a built-in pop filter. I found that speaking directly into the microphone from around ten centimetres away gave the most natural sound to my voice – speaking across the microphone didn’t sound quite as good. And that produced almost no thumping plosives in the recording. Oh, if I worked at it and aimed my ps and bs carefully, I could produce some popping. But for regular use, and without specific precautions, there are very few issues with direct talk at close range into the Rode NT-USB Mini microphone.

And it was just easy to use.

The headphone amp was more than good enough for just monitoring recording. I played back some quality music and it sounded excellent.

Rode’s special website for the microphone is here. Also, until Friday 6 March Rode is running a competition with three of these microphones available as prizes. Go here to check it out.