ROG Phone – a gamer’s delight we won’t be seeing 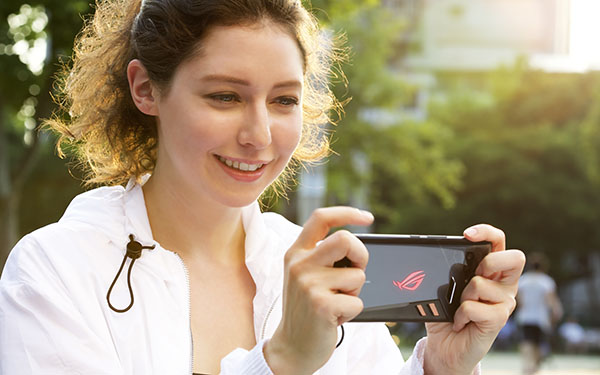 Republic of Games – ROG for short, and a brand name for ASUS – has launched a smartphone intensely focused on gaming. The ROG Phone has been designed to take mobile gaming seriously. Sadly, it doesn’t look likely to hit Australia.

What are the problems with gaming on a phone? Well, there may be performance issues, smoothness of graphics, control limitations. But I reckon a big one is battery anxiety. No worries, eh? Just plug the phone into power and keep on playing. Except for the callouses one develops on one’s right hand. That’s from where the power cable plugged into the “bottom” of the phone rubs your skin.

I raise this as an illustration of the thoughtful design that has gone into the ROG Phone. How would you deal with this issue? ROG did it by adding two USB Type-C ports on the left side of the phone. Turn the phone landscape in the way one naturally does to play many games, and those new ports are now at the bottom of the phone. A power cable isn’t going to interfere with play.

There’s one in the usual position as well (kind of – it’s offset towards one side). On the same end as that port, there’s also a good old-fashioned 3.5mm analogue headphone socket.

To keep things going for a long time the phone packs a 4,000mAh battery. ROG says that’s good for up to seven hours of Wi-Fi gameplay and 11.5 hours of Wi-Fi video playing. A Qualcomm Snapdragon 845 processor powers the phone. ROG says that it uses not just any 845, but ones selected to be picks of the crop. According to a number of the standard benchmarks (conducted by ROG), it outperforms all the competition by a significant margin.

That kind of performance can lead to overheating, so the phone includes a copper heat “spreader” and cooling vents on the rear. ROG says that CPU cooling efficiency has been increased by 60% and players can run it at full speed for five times the usual period. A clip-on cooling fan is provided with the phone and helps in intense situations.

The phone uses an AMOLED display with an 18:9 aspect ratio. Being AMOLED, switching speed is a fast 1mS, and frame rates of up to 90fps are supported. ROG says that the phone has a 10,000:1 contrast ratio (although I think they’re understating things because AMOLED typically has an infinite contrast ratio). Colour coverage is 108% of the DCI-P3 standard (DCI stands for Digital Cinema Initiative).

Unfortunately, we won’t be seeing the ROG Phone here soon, perhaps never. Rumour has it that regulatory compliance costs in Australia are too high to make it a worthwhile sales proposition. Still, we can admire the product, even if we can’t use it.

The writer attended the launch of the ROG Phone in Taipei as a guest of ASUS. Here’s a link to the international site for the ROG Phone.