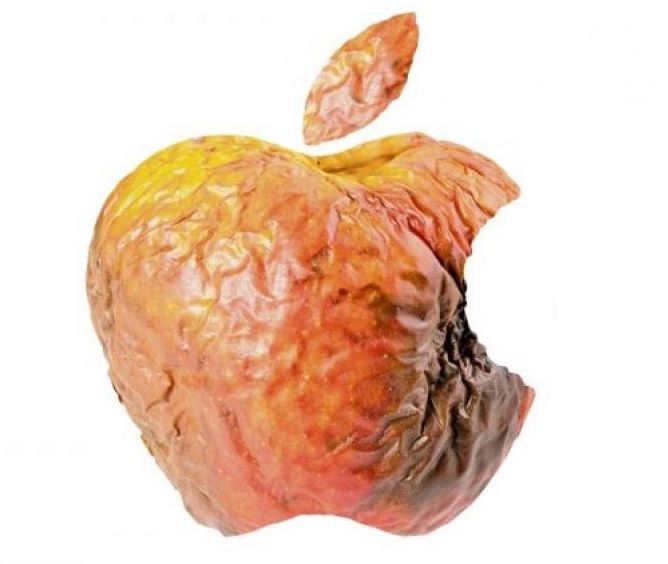 Rotten Apple has been hit with a record A$9 million fine. Why? It told Australian consumers that third-party iPhone/iPad/iAnything repairs would invalidate its warranty.

These are good laws every corporate citizen has to live by. We are lucky to have them – most countries don’t. Otherwise, the rotten apples in the barrel taint the good ones, ethics go out the door, and consumers are the losers.

It all started with the ‘error 53’ scandal. Apple says that if a third-party repairer fixed a touch ID sensor on an iPhone 6 or later, the warranty was void. The error made the phone worthless.

But this was the tip of the iceberg. Rotten Apple also made false declarations that any third-party repairs including screen replacements may invalidate the warranty.

Apple iPhone owners will loudly tell you that a) iPhone screens do break with amazing regularity and b) Apple charges a fortune to replace them. Third-party repairers do the same work for about 30% of the cost.

In fact, Rotten Apple knowingly and consciously withheld the repair codes to enable third-party repairers to fix and reset iPhones.

It also gave ‘old for new’ products as warranty replacements. A plethora of Apple customers state in forums that their shiny iPhone sans scratches and wear and tear were sent back with items that would not look out of place in a dog house.

The ACCC said Apple would commit to providing new devices as replacements if the consumer requests one.

The gist of the ACCC case is deception. But it points to desperation. Absolute desperation to keep the money machine intact.

“If a product is faulty, customers are legally entitled to a repair or a replacement under the Australian Consumer Law, and sometimes even a refund. Apple’s representations led customers to believe they’d be denied a remedy for their faulty device because they used a third-party repairer,”  Court said.

“The Court said the mere fact that labelling did not, and could not, result in the consumer guarantees ceasing to apply or the consumer’s right to a remedy being extinguished.

“The Court’s declarations hold Apple US, a multinational parent company, responsible for the conduct of its Australian subsidiary. Global companies must ensure their returns policies are compliant with the Australian Consumer Law, or they will face ACCC action.”

After ACCC told Apple of the investigation, it began an outreach program to about 5000 customers. Apple originally claimed that fewer than 275 Australian customers had been denied warranty remedies.

Apple Australia also undertook to train its staff in Australian Consumer Law. It will also provide information about warranties and the ACL on its website. Apple must also ensure its systems and procedures are compliant.

Apple is no stranger to lawsuits.

According to the ABC Apple also defrauded iPhone users by slowing devices without warning to compensate for poor battery performance.

A few days following Apple’s admission, the lawsuits started rolling in. The first U.S. class-action suit against Apple was on December 21, 2017. It states that Apple’s actions not only lowers the resale value of existing iPhones but also coerce iPhone owners to upgrade prematurely. Nearly 60 other class-action suits have been filed. This won’t go away.

Faulty Watch – no its a feature

Another class action concerns ‘active concealment’ of Apple watch defects. Every model through the Series 3 contains “the same defect and/or flaw, which causes the screens on the Watches to crack, shatter, or detach from the body of the Watch, through no fault of the wearer, oftentimes only days or weeks after purchase,” lawyers argue in a class action brought through the U.S. District Court for the Northern District of California.

“Apple knew that the Watches were defective at or before the time it began selling them to the public,” the complaint continues. “Furthermore, consumers complained to Apple about the Defect almost immediately after Apple released the Series 0, Series 1, Series 2, and Series 3 Watches.”

Just search Google for Apple Litigation – it is an interesting and very long read.

Congratulations to the ACCC – there is a lot more to do

Still waters run deep; a leopard does not change its spots etc. We can only hope the ACCC looks a little deeper.

I can only hope that the Australian public wakes up. Some of the shiny Apple business practices do not pass the pub test. Nice gear though.

I came across a quote from the U.S. Federal Trade Commission that sums it all up.

It is both the purpose and the function of the Commission to retain the benefits of the advances made to date and to continue to improve business, individually as well as collectively.

To achieve this improvement, we must frankly and courageously notice and take corrective action as to those trade practices which are harmful, or which block or stifle improvement, or which are unfair to industry as a whole, or to the consuming public whose patronage and good will are vital for the existence and growth of all industry.

Perhaps there never was a time when the need for holding fast to old-fashioned truths, ideals and ethics was so emphasized and so necessary as at present.

The public’s growing consciousness of its right to, and its apparently determined insistence on, truth in advertising, decent and honest trade standards, money’s worth for money paid out, and a fair deal, certainly never before were so strong.

That quote was taken from “The evils of monopoly and unfair trade practices 1937.” Some things never change.

I am not questioning the quality of Apple products. I am questioning any rotten to the core ethics. To a degree, some of those ethics have allowed it to build the world’s largest company. A company where iPhone accounts for about 80% of its sales.

Its business model is a walled garden – in other words, it is protecting its turf at all costs. Vendors and suppliers pay dearly to play in the garden – if they are allowed in at all. Why are there no iPhone, iPad, Mac and other Apple product clones? It is a monopoly.

We all know that an Apple iPhone costs under US$200 to make – it sells for five to six time that. Apple makes the highest ARPU (average revenue per unit) of any smartphone maker. Probably of any luxury goods maker. They do it by locking you into iTunes, App Store, Apple Music, iCloud, Telco carrier contracts and so much more. One phone drives the whole Apple money machine.

But this kind of behaviour goes back to 2004 when Apple violated the U.S. antitrust statutes in operating a music-downloading monopoly iTunes. It changed its software design to the proprietary FairPlay encoding. As a resulting other vendors’ music files were incompatible with and inoperable on the iPod. Enter Apple Music.

This is unconscionable – let’s call it what it is – corporate thuggery. It is not the first time either. In the 90s it was caught actively financing anti-Microsoft slander groups to build its brand. That is another story.

If you have read this far, have a look at Apple’s anti-right to repair stance here.

Wikipedia has a good overview of Apple criticisms here.