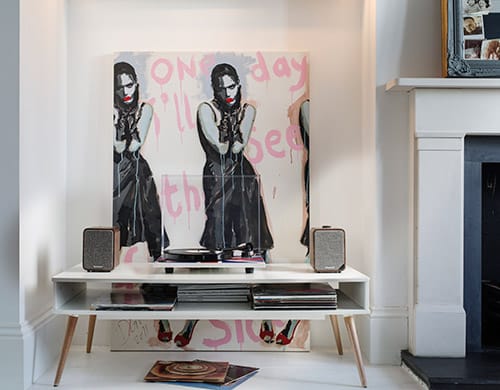 Just because there are two of them doesn’t mean that the Ruark MR1 Mk2 speakers are large. For the past dozen years, UK firm Ruark Audio has become famous for its compact radios and speaker systems. See, for example, here and here. This system is certainly compact. It consists of two small speaker boxes. The one on the right is the active one – it contains the electronics and amplifiers. The other is passive. It’s just the speaker, and it is connected by means of a two-metre-long 3.5mm cable (which Ruark includes).

Each speaker is only 170mm tall, 130mm wide and 135mm deep. They are available finished in either a wrap-around walnut or white finish. Ruark calls the latter “soft grey”. The front grille on each is a mottled grey, and looks pleasingly tweedy. You control the volume with a black knob on top of the active speaker. You can also press it to the change input or switch on the system. Press and hold, and it switches off the system. The speakers come with a little remote control. That also allows input selection, on and off switching and volume control. Even though the speakers are compact, you’ll need shelves a with spacing of a little more than 170mm so that you can get at that top knob.

There are three inputs. In addition to Bluetooth, there’s a 3.5mm analogue audio input and an optical digital audio input. That means you can plug it into your TV, and also can plug in some audio device that doesn’t support Bluetooth. For example, I used a Chromecast Audio to add low-cost network connectivity to the system. Three little coloured lights indicate which input is selected. All the connections are on the back.

Inside each speaker are a 75mm long throw woofer and a 20mm textile dome tweeter. Both use neodymium magnets. They are powered by a twenty-watt Class A-B amplifier. The cabinets are bass reflex, which means they have a tuned “port” – a hole in the enclosure – that allows selected bass frequencies to be supplemented by the energy from the rear of the woofer.

The Ruark MR1 Mk2 speakers are small speakers, but they still need power. They come with a power pack for your wall socket. But they can be portable in two ways. First, if you unplug the passive left speaker, the right speaker will notice this and play both left and right channels, mixed down to mono. That makes it useful if you want to take just one speaker to a holiday house.  Second, you can purchase the optional BackPack Mk 2 for $129. This is a battery pack that attaches to the rear of the right speaker. It charges when power is applied to the speaker, and when there’s no power, it can run the speaker for up to twelve hours. I guess it would work with the left speaker attached as well, but I suppose that would reduce the available run time.

They may be small, but the Ruark MR1 Mk2 speakers sound somewhat, indeed quite a bit, larger than their physical size. Overall, they offer a bright, high fidelity sound. Upper- and mid-bass was initially a little recessed, at least in part due to me positioning them on stands in a position I’ve long-since established as excellent for high-end speakers. Which was kind of ridiculous.

I moved the speakers back into the position most people would use: up against a wall. That bumped up the bass nicely bringing it into balance and softening the brightness a little. There was a nice stereo spread of sound, with a decent sense of “depth” in the sound.

Ed Sheeran’s album X was pleasingly boppy, with a good bassline, and excellent detail. Even the kick drum came through a little, although it may have been more the higher harmonics than the deepest frequencies.

Moving to something a little more refined, I put on Schubert’s String Quintet in C major, which was delivered with suitable bite, but without excessive steeliness in the violins. The speakers conveyed rather impressively the gusto with which the Schiff/Alban Berg Quartet played.

The metal-ish opening strains of Jethro Tull’s Aqualung pounded out with a force belying the size of the Ruark MR1 Mk2 speakers. But it was only with this music that some limitations became apparent. Ones that anyone should expect. Namely, when I was shooting for room-filling levels in a large room, they simply ran out of power to keep up. Oh, they were fine for comfortable, listenable levels. Just not thumpingly loud volume levels.

Yet, even though I’ve just written that, the fuzzy guitar solo of the title track is ringing out, loudly, fully, cleanly. It probably depends on the frequency mix (the deeper the bass, the more that a speaker has to produce).

So I wouldn’t hesitate with these speakers for a teen’s bedroom, or for a normal person’s loungeroom (so long as they’re not inclined towards head-bangery).

There are two different ways in which Bluetooth-connected speakers and headphones control the volume of the sound that you hear. They all have some kind of knob or button or whatever to adjust the level up or down. But how does it adjust the volume? Many act as controllers for the source device. You turn the volume up using the knob, and you’ll see the level indicator on your phone go up as well. There is, in effect, only one control and it makes no difference whether you use the buttons on your phone or on the speaker. The problem with this is that sometimes there’s insufficient range to get a good level with some music and sounds.

The Ruark MR1 Mk2 speakers use the other system. They just treat the incoming Bluetooth signal the same as any other signal. How loud that signal is depends on the level you set on your phone. The speaker volume level is quite independent. Adjust the volume knob or remote control with these speakers, and it does not affect the phone’s volume level. That tends to give a wider range. There were no problems with levels just being too low to be enjoyed properly.

In fact, the Ruark MR1 M2 speaker eschews control completely. If you’re used to Bluetooth speakers with a Play/Pause button, you may miss it with these. Press the volume button on top, and it’ll certainly stop playback, but only because that button breaks the connection.

Stereo may not mean much to you. I’ve often seen stereo speakers used weirdly: one up high, one on the floor; the two of them in separate rooms; all manner of arrangements which make it impossible to listen to stereo properly. If you don’t care about such things, then you’ll be quite content with Bluetooth-stereo-in-one-box. Those who want a bit more from their music should go listen to the Ruark MR1 Mk2 stereo Bluetooth speakers.