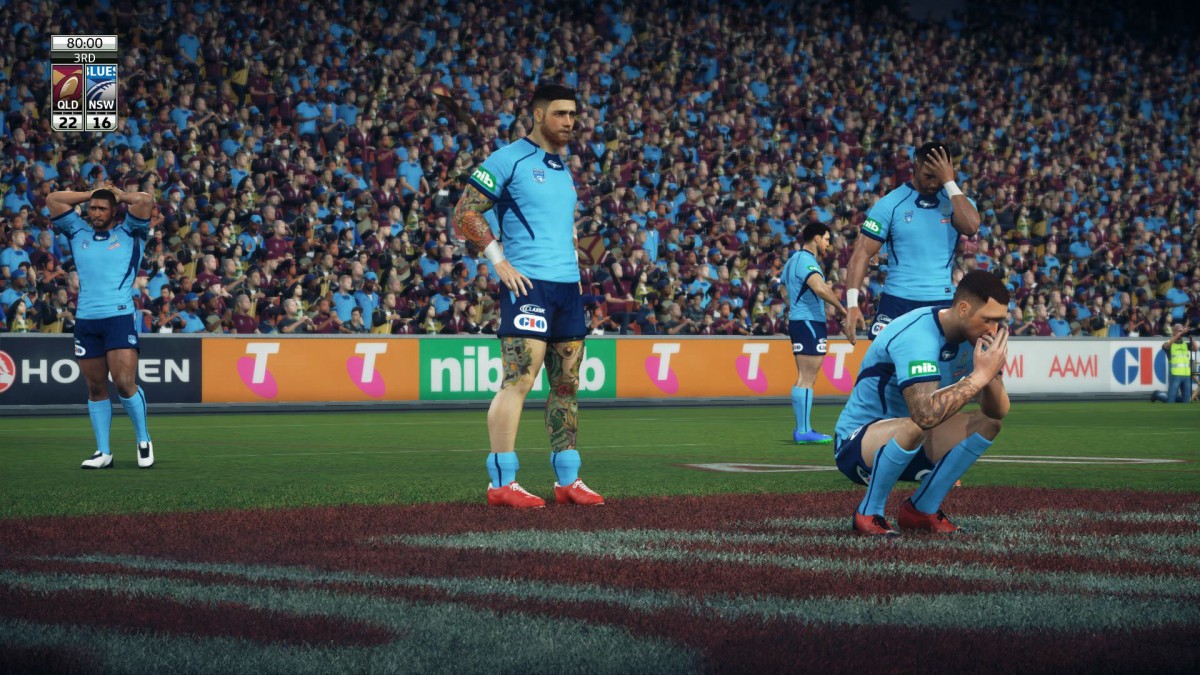 With the 2015 NRL season about to conclude with the NRL Grand Final pitting the Brisbane Broncos and the North Queensland Cowboys, the tragic Rugby League fan may need something to cope with the impending end of the season. Fortunately, there’s a new Rugby video game to play, so that’s something.

Anyone new to the Big Ant rugby titles will find a “drills” option to teach you the basics, allowing you to dig in your feet without getting grass everywhere, teaching passing, defending, goal kicking and attacking. After you have mastered some of these necessary in-game skills, you can play a casual match where you have the option of playing for your favourite NRL team, or even someone else, such as an England Super team, a team from the lower grade competitions (in NSW, Queensland, or England), or as a representative team like those from other nations.

Alternatively, you can see what your own rivalry would be like between the NSW Blues and the Queensland Maroons, as these are all options casual match caters for.

But casual is just one part of the game, and you’ll find a good and proper career mode, too, allowing you to see what life is like as a player or even as a coach.

In the latter, you’ll be in charge of a club team and participate in their respective competitions. For example, if you pick the South Sydney Rabbitohs, you have the option to compete in a pre-season tournament and then battle it out in NRL Premiership.

As the coach, you can also buy and sell players depending on your budget, strengthening or weakening your team depending on what it is you happen to be doing.

Over in player career mode, you have two options where you can either play as an existing player (such as Greg Inglis) or you can choose “rookie player” and create your own player using the player editor, allowing you to add a name, history, skill set, and even build up your own player appearance.

The graphics are’t much to write home about, though, with players and models not quite looking the best they can, and closely resembling moving sausages. Textures aren’t the high point of the game, and despite this game being made for next-generation consoles — Xbox One and PlayStation 4 — as well as the older Xbox 360 and PlayStation 3, it will feel more like you’re playing it on those older consoles.

Sure, the imagery you’re seeing is 3D, but you can’t compare this to the likes of the EA powerhouse titles that are FIFA or Madden, and the 3D engine is by no means as powerful as to how good it looks.

Fortunately, Rugby League Live 3 isn’t about the graphics, but rather the gameplay, and when you start getting into the game, you’ll find NRL, English Super League, and the Auckland Nines in competition mode, as well as the option for your own custom competition or State of Origin series.

Once you’ve decided to play, you’ll find a lot of fun, especially if you’re into rugby league, though we do need to say that the controls in-game are tricky to master. When you get the hang of it, you’ll find you’re playing the game much like a pro, only without the exhaustion evident from real life activity.

While you play, you’ll hear the likes of Fox Sports commentator Andrew Voss as well as Channel Nine’s speaker Phil Gould, and this helps to provide a bit more realism to the game, making up for where the graphics let the title down.

Later on, you’ll find something to do in the “fan hub”, where you can create, edit, and delete players and clubs, sharing them online with the Rugby League Live 3 community, and then playing online against other players.

Overall, it is definitely a bit of fun, though it doesn’t quite have the look and feel of big name titles.

That said, we are glad to see a local developer take on what is a very local sport, developing a game that appeals to Aussies.

If you’re feeling like you need a fill of rugby league over the warmer summer months and going outside isn’t doing it for you, Rugby League Live 3 is a great way to fill the void.