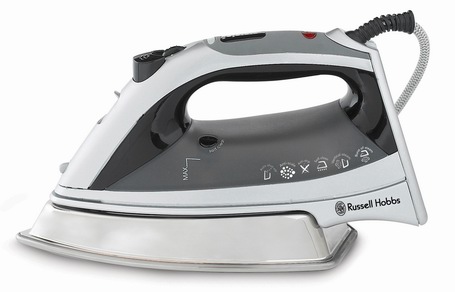 One look at Russell Hobbs’ Digital Steam Glide Iron and you know you’re in for a treat. Not only is the Steam Glide one of the most sophisticated and elegant iron that I’ve ever seen, it is a solid performer that offers outstanding results every time. Best of all, it moves beyond the traditional temperature dial to a digital readout for easy to use, accurate temperature control.

Nothing out of the ordinary here, just ensure that you have removed all adhesive stickers, plastic covers and packaging. Don’t worry if the iron smokes a bit at first, it will stop shortly. Be sure to press both the spray and steam buttons a few times on an old piece of fabric to clear any particles left over from the manufacturing process.

While it all sounds very complicated, it really isn’t. In fact once you’ve figured out the colours and beeps, it becomes a far easier and more accurate way to know that you are getting the temperature you are after.

Russell Hobbs’ tagline accurately summarises the performance of this iron: “Anything less is second best.” This elegant iron is sophisticated in terms of both design and function. From its initial black packaging through to its grey, silver and black design, this iron oozes class.

But more importantly it has the features to match. The Digital Steam Glide Iron has a powerful 100 g steam burst as well as a variable steam/dry iron control. The shot of steam boosted its performance even on crushable fabrics such as linens and heavier denims. The ‘cool’ setting worked well on nylons, the ‘warm’ function performed satisfactorily on woollens and the ‘hot’ setting was outstanding on cotton and linens.

Two thousand two hundred watts of power ensures that the iron is ready to use in seconds while the self clean system and the anti-calcium function prevents limescale build up.

ItÂ also comes with a very large water tank capacity (400 ml) which means less refilling while the specially shaped water jug with angular spout helped prevent spills when filling the tank. However, we found the 150 ml water jug to be slightly on the small side as it took three trips to the sink to fill the water tank when we did a large batch of ironing.

While it did border on feeling heavy, the Digital Steam Glide Iron includes functions that you’ve come to expect from premium irons including a cool spray mist, stainless steel soleplate, auto shut-off and an anti-drip function that prevents water from leaking out the soleplate and potentially causing stains. It also comes with a few bonus surprises such as an extra long eight foot swivel cord with 360 degree manoeuvrability and a soft grip handle with a slip-resistant grip.

The Russell Hobbs Digital Steam Glide iron is priced extremely well and produces excellent results every time. Whether we used it for delicates silks or heavy work clothes, itÂ powered through the load.